You need stars to win championships. It’s one of the oldest pieces of NBA conventional wisdom, and every year it’s validated as another star leads his team to the title. So far this year the Golden State Warriors, Memphis Grizzlies, Toronto Raptors and Washington Wizards may hold some of the top spots in each conference while seemingly lacking the celestial requirements for championship contention. But at some point they’ll be overtaken by the Cleveland Cavaliers, Chicago Bulls, Houston Rockets, San Antonio Spurs or Los Angeles Clippers.

It’s an idea that gains more credence every time an NBA analyst trots it out. Bill Simmons asks, “Can you win an NBA Championship if Carmelo Anthony is your best player?” Jeff Caplan wonders if a team “lacking a legit superstar” like the Grizzlies or the Indiana Pacers can really win it all. NBA.com roundtables lead off with questions like, “Can a team win it all nowadays without an MVP-type superstar?” The starless 2004 Detroit Pistons are often acknowledged as the exception that proves the rule.

What we do know for sure is that it takes an elite team performance to win a championship, and elite teams are usually (but not always) driven by elite players. The problem is that there is no objective definition of what makes somebody a suitable enough star to win championships. Dwyane Wade didn’t have the experience to lead his team to a title … until he did just that in the 2006 NBA Finals. After his playoff struggles in 2006 and 2007, Dirk Nowitzki clearly couldn’t help his team break through … until he did in the 2011 finals. Often we don’t recognize the players who meet our imagined championship threshold until the second before they cross it.

But the data — the data holds some answers. We can use it to look at the rosters of teams that made the finals and better understand just how good their best players were. Using Statistical Plus-Minus — an estimated measure of a player’s value in points per 100 possessions relative to the league average — I looked at where each finals player ranked, relative to the league, in the season his team made the finals. 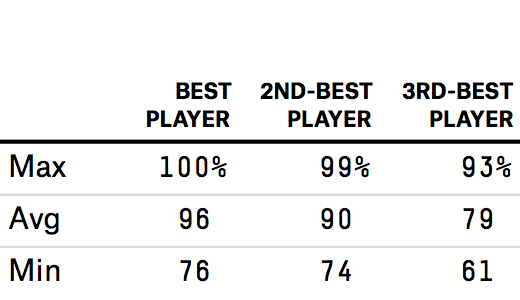 The table at left covers the past 20 seasons and shows the average, minimum and maximum SPM percentile for the first, second and third-best players on finals teams.

That bottom row is not the fabled 2004 Pistons. It’s the 1999 New York Knicks, who made their way to the finals as an eight seed during the lockout-shortened season. Only two other finals teams over the past 20 seasons had their best player rank below the 90th percentile in SPM — the 2010 Boston Celtics and the 2000 Indiana Pacers.

So the best teams are indeed almost always driven by the best players. But who are those players? Let’s use last season as an example. The table below shows SPM percentile ranks from 2013-14. The table is color-coded, separating the players into two groups: those who are within one standard deviation of the average for the best players on NBA Finals teams for the 1994-95 through 2013-14 seasons, and those who just missed the cut.1

On these lists you’ll find all the old standbys but probably some surprises, too. Kyle Lowry’s performance last year put him the 97th percentile, well within the mark we’d expect to find for the best player on a championship-caliber team. The Toronto Raptors team around him just wasn’t up to that level.

You’ll also notice that four members of the San Antonio Spurs appear on these lists, while just one member of the Miami Heat does: LeBron James. The Heat were something of an outlier last season as Dwyane Wade, the team’s second-best player, had an SPM that placed him in the 82nd percentile, more than a standard deviation less than the average second-best player on finals teams. In fact the average SPM percentile rank of the Heat’s three best players last season — James, Wade and Mario Chalmers — was just 82. On only six of the 40 finals teams in this sample did the three players have a lower average mark. By comparison, the average SPM percentile rank of the Spurs’ three best players last season was 92nd.

Which brings us to the 2004 Pistons, the championship team often acknowledged as lacking a transcendent star. But this perception is a misconception. No players on the team were dominant individual scorers, sure, but the Pistons’ best players performed at levels of elite stardom. Their three best players that season — Ben Wallace, Rasheed Wallace and Chauncey Billups — had SPM marks that placed them in the 95th, 95th and 92nd percentiles, respectively. In fact, the average of the trio’s SPM percentiles that season ranks higher than that of all but five of the 40 teams in this sample. The 2004 Pistons may have been starless in terms of the subjective ways we define the term, but by objective measures of performance, they had as much star power as nearly any championship-caliber team of the last 20 years.

This should bring hope to teams like the Warriors, Grizzlies, Raptors and Wizards. We may not see Andrew Bogut, Mike Conley, Marc Gasol, Kyle Lowry or John Wall as the kind of stars who can help lead a team to the finals. But each has been at or near that level of production in the past. If the teams around them can provide the necessary support, the fact that they aren’t dominating scorers or sneaker-selling heroes won’t stop them from winning championships.