The New York Mets have a new manager: Carlos Beltrán, who also played for the franchise from 2005 through 2011. Beltrán returns to New York with a laundry list of recommendations from his days as a de facto coach on the bench for the 2017 World Series-winning Houston Astros — and he could have the highest ceiling of anybody the Mets might have hired this offseason. But his hiring does come with a potential pitfall, if MLB history is any guide:

He was a legitimately great ballplayer.

Although many Met fans will never forgive Beltrán for taking the called strike that ended the 2006 National League Championship Series, he ended up compiling 30.2 wins above replacement1 for the franchise in his career, which ranks seventh all-time behind only Tom Seaver (74.6), Dwight Gooden (51.3), David Wright (51.2), Jerry Koosman (37.9), Darryl Strawberry (36.2) and Jacob deGrom (34.3). Tack on the 38.5 WAR he earned at his other destinations — the Royals, Yankees, Cardinals, Astros, Giants and Rangers — and Beltrán established himself as one of the best center fielders in MLB history, a borderline Hall of Famer at the very least.

Beltrán retired with a JAWS score (a measure of Hall of Fame value that averages together a player’s lifetime WAR with his WAR from his seven best seasons) of 56.4 over his playing career. Since 1901, there have been about two dozen players with a JAWS as high as Beltrán’s who tried their hand at managing as well. The best, according to The Baseball Gauge’s “Manager Points” — which reward managers for winning games and advancing in the playoffs — was easily shortstop Joe Cronin (58.4 JAWS). Cronin played for the Pirates and Senators before Washington named him player/manager in 1933 — a role he resumed in Boston after he was traded to the Red Sox two seasons later. He ranks 43rd all-time in Manager Points, slightly behind new Phillies manager Joe Girardi — whom, coincidentally, the Mets reportedly passed on as a managerial choice last month.

Cronin was a rare success story for great players-turned-managers. The typical case in that category, however, turned out more like Eddie Mathews or Ted Williams, neither of whom were able to convert their considerable knowledge of the sport into a winning record at the helm of a team. (The same tale basically went for players as legendary as Ty Cobb, Cy Young and Honus Wagner.) Williams — who once famously said, “all managers are losers; they are the most expendable pieces of furniture on the face of the Earth” — did manage to lead the Washington Senators to a surprising 86-win season in 1969, his first year with the club. But he was unable to replicate that success in subsequent seasons, going an abysmal 187-288 over his final three campaigns before walking away from the managerial game.

Perhaps that shouldn’t have been too surprising. As we’ve seen in our other research about players-turned-coaches, there is surprisingly little relationship between how well players played the game and how effectively they can guide others to playing the game well.

Plenty of managers do come from a playing background, of course. It’s just that most of history’s greatest managers were mediocre players at best. Two of the all-time leaders in Manager Points, for instance, are former Cardinals skipper Tony La Russa and ex-Braves boss Bobby Cox — who combined for a grand total of 0.6 WAR in their playing careers. If you plot out a manager’s JAWS score as a player against his Manager Points in the dugout, very few achieved excellence in both categories: 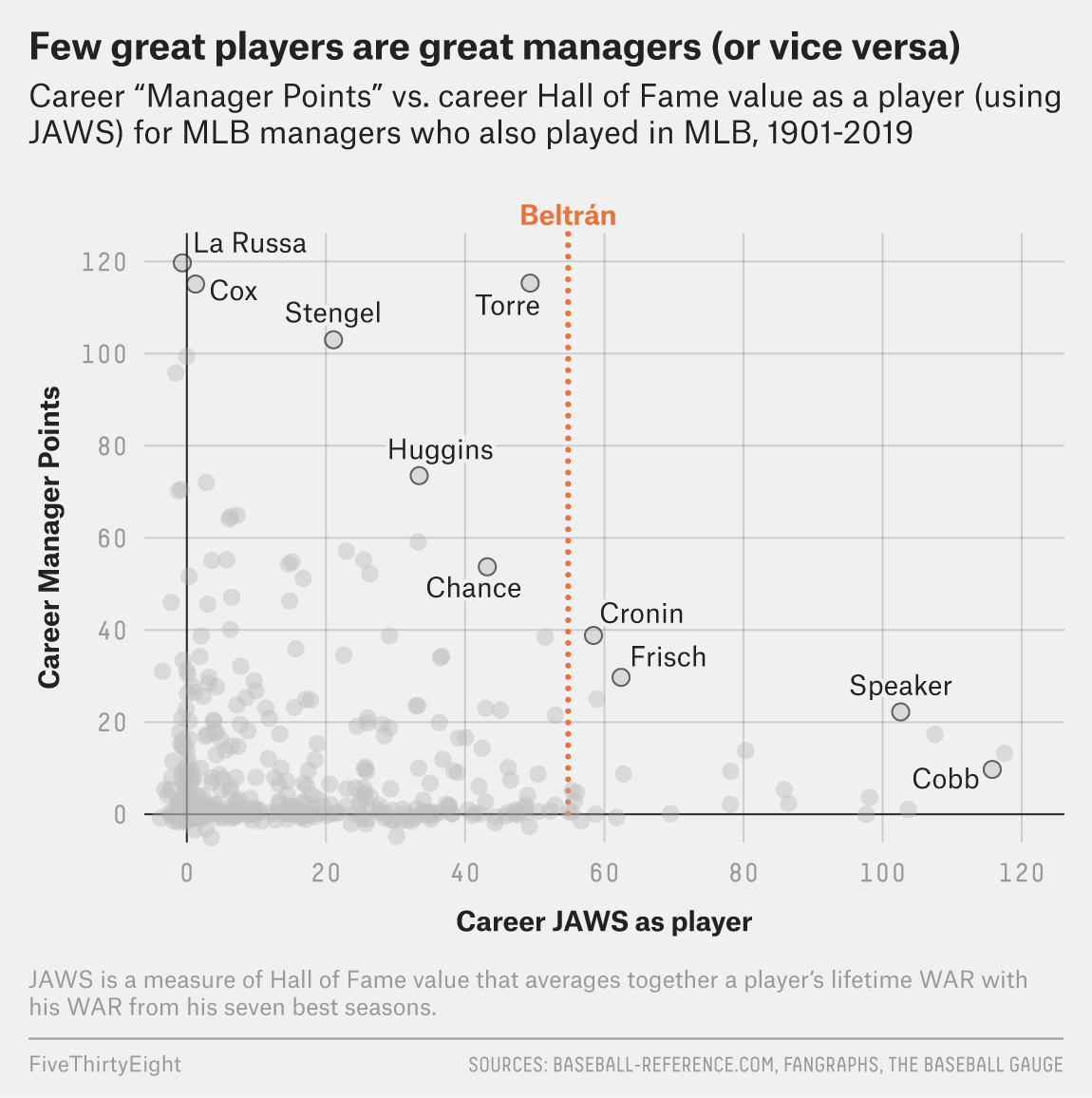 Cronin is in that group, as are former Chicago Cubs player/manager Frank Chance (who, in 1908, led the last championship winner on the North Side before 2016); three-time pennant-winning New York Giants manager Bill Terry; and even Dusty Baker, who managed the Giants, Cubs, Reds and — most recently — the Nationals. So it’s not entirely impossible to be a good player who becomes a high-quality manager (though none aside from Cronin was quite as good on the field as Beltrán was).

The only truly runaway success story among players-turned-managers is Joe Torre, who was an MVP in 1971 and retired with a JAWS of 49.3. He is not in the Hall of Fame as a player, but he was close to checking off a few of the boxes that mark a career bound for Cooperstown. As a manager, he overcame a below-average start to his career on the bench to win four championships and six pennants with the New York Yankees in the 1990s and 2000s. Torre ranks fourth on the all-time list of Manager Points; he was inducted into the Hall of Fame for his managerial work in 2014.

So Torre was almost as good on the field as Beltrán and a rousing success in his post-playing career. Needless to say, Mets fans would be beyond ecstatic if their new hire’s managerial stint in New York mimicked Torre’s. But Torre is the exception to the general rule that great players seldom make great managers — and that the greatest managers came from humble playing roots.