When it comes to health care politics, it looks like doctors and nurses are just as partisan as the rest of us. A survey released Thursday found that as a whole, primary-care providers are slightly more likely to view the Affordable Care Act unfavorably than favorably, but breaking the group down by political affiliation reveals a sharp divide between Republicans and Democrats.

While 52 percent of all primary-care physicians viewed the law unfavorably, the vast majority of Republicans, 87 percent, had a negative opinion of it, compared with just 12 percent of Democrats. 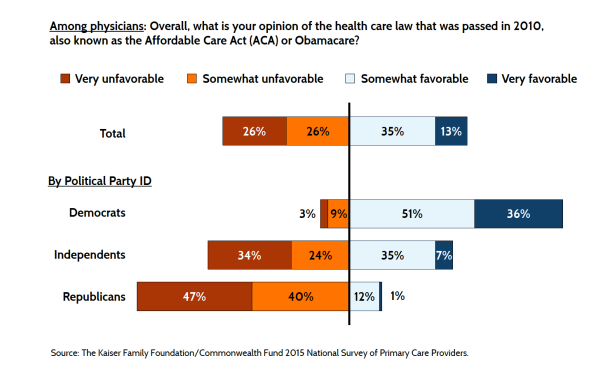 The survey, conducted by the Kaiser Family Foundation and the Commonwealth Fund, also found that despite negative perceptions of the law itself, doctors are less negative on its effect on their ability to provide quality care, with 59 percent saying the quality this year is as good as it was before the ACA. The rest of the respondents were split equally between those who thought that ability had gotten worse and those who thought it had improved. Doctors who’d taken on additional Medicaid or newly insured patients in the year since the expansion took effect were slightly more likely to think the quality of care they were providing had improved.

But again, opinions varied greatly between Republicans and Democrats. Sixty-three percent of Democratic doctors thought Medicaid expansion had a positive impact on quality of care, compared with just 18 percent of Republicans. 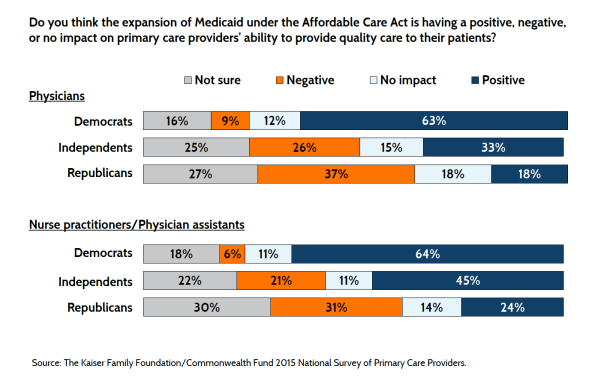 When asked more specific questions, about their medical practice overall, the cost of health care and the quality of care a patient receives (as opposed to the quality of care the doctor provides), primary-care physicians as a group were more likely to think the ACA had a negative impact than a positive one. Access to care was the exception, with 48 percent saying the law had a positive impact. The answers suggest that doctors’ opinions of the ACA are similar to the general population’s: Although access to health care may have improved under Obamacare, costs have left many people with a negative opinion of the law. 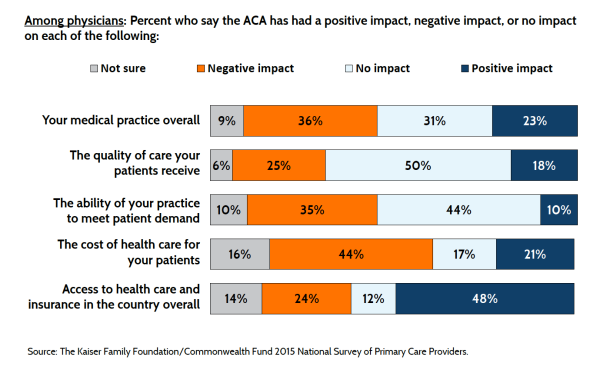 And like the public, a lot of doctors aren’t clued in to many of the law’s provisions. Just 59 percent of physicians accurately reported whether their state had expanded Medicaid, and only half of the physicians surveyed were aware of a 10 percent increase in Medicare payments provided by the law to some primary-care providers.

Many ACA opponents speculated that a deluge of new patients would lead physicians to stop accepting Medicaid, but the poll shows no evidence of that. A survey completed in 2011-12 found that 52 percent of primary-care doctors were accepting Medicaid, according to Kaiser Family Foundation, compared with 50 percent earlier this year, when this survey was conducted.

(That’s not to say it’s easy for the ballooning population of Medicaid recipients to find a primary-care physician, especially in states that expanded the program under the ACA. California’s state auditor issued a report Tuesday, for example, which found that the state’s 3.5 million new Medi-Cal enrollees may not have sufficient access to doctors.)

Liz Hamel, the Kaiser Family Foundation’s director of public opinion and survey research, said she was a little surprised that doctors’ attitudes were so partisan. “Even though they have this closeness to the care, they still fall on party lines when it comes to the law,” she told me.

Hamel said the sample is representative of the American Medical Association master file of primary-care physicians, and not weighted by political affiliation (information the AMA doesn’t keep). However, it was weighted by factors such as age and gender, which are often associated with political affiliation. An equal share of respondents — 27 percent — identified as Republicans and Democrats on the survey.

A study last year found that, as a group, doctors have shifted from predominantly Republican to Democratic (that’s among all physicians, not just primary-care doctors) over the past two decades. The shift in party identification is largely due to an increase in the number of female physicians, who tend to be Democrats.

Campaign contributions by physicians to candidates in presidential and congressional elections, as well as to partisan organizations, have also increased in number and amount over the past two decades. In the 2011-12 election cycle, 9.4 percent of doctors contributed a total of $189 million, up from 2.6 percent of doctors contributing a total of $20 million in the 1991-92 cycle.