Mitt Romney’s personal favorability ratings have been relatively poor throughout this election cycle. In his best surveys, roughly equal numbers of Americans have said they hold favorable and unfavorable impressions of Mr. Romney while in other cases they have been substantially net-negative.

Because favorability ratings can fluctuate a lot from poll from poll and survey firm to survey firm, it is probably best to take a longer-term view of them. Since the start of the year (Jan. 1), across a few dozen surveys, an average of 36 percent Americans have said they hold a favorable view of Romney and 46 percent an unfavorable one. Mr. Romney’s numbers were especially poor in February but have rebounded some since then.

But does any of this matter? Are candidate favorability ratings useful predictors of election outcomes?

Let’s look at some data.

In the table below, I’ve listed the average favorable and unfavorable ratings for all presidential candidates since 1976 based on New York Times/CBS News polls conducted in January through June of the election year. I term these “early stage” favorability ratings; we will look at numbers in later phases of the election cycle down below.

One important thing to note before we proceed further: when looking at favorability ratings, it is especially important to compare candidates’ numbers in the context of other surveys conducted by the same firm. New York Times/CBS News polls, for instance, typically include an option for voters to say they haven’t heard enough a candidate to come to an opinion about them; most other polls do not explicitly invite the respondent to make this choice. This is, in my view, a perfectly sensible way to ask the question — it may elicit more honest responses than polls that seem to force voters into one or another choice for candidates whom they barely recognize. (Contrast this with what you’ll occasionally see from some automated polling firms, which sometimes implausibly find that 80 or 90 percent of voters have an opinion about an obscure senate or gubernatorial candidate months before an election.) This does mean, however, that both the favorable and the unfavorable ratings tend to be lower in New York Times/CBS News poll than in those conducted by other news organizations. So we’re looking at New York Times / CBS News data alone rather than melding different polls together. 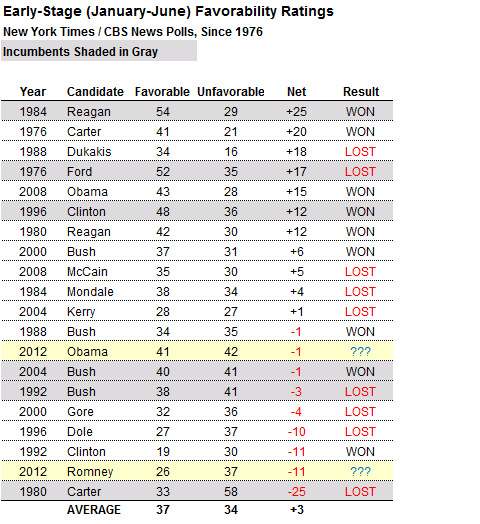 On average over New York Times/CBS News polls conducted in January, February and March, Mr. Romney’s favorable rating was 26 percent and his unfavorable rating was 37 percent, for a net-negative of 11 points. These figures are fairly poor historically but not unprecedented. Bob Dole had similar numbers in New York Times/CBS News polls in early 1996. Bill Clinton was not as well known in 1992 as Mr. Romney is this year, meaning that both his favorable and unfavorable ratings were lower, but his net score (negative 11) was the same as Mr. Romney’s. And Jimmy Carter had very poor favorability ratings as an incumbent in 1980 (just as his approval ratings were poor).

Overall, these early-stage favorability ratings have had a mixed track record as a predictor of election outcomes. The candidate with the better net-favorable rating in the early-going won the election in 1976, 1980, 1984, 1996, and 2008. But Mr. Clinton won the election in 1992, despite making a poor first impression on voters. On the flip side, Michael Dukakis had very promising favorability numbers early in the 1988 cycle, but they deteriorated over the course of the election cycle and he took a clear defeat. (I’m not sure where you’d classify the 2000 election because of the split between the popular vote and the Electoral College, or 2004 since George W. Bush and John Kerry had essentially the same net favorability rating in the early going.) 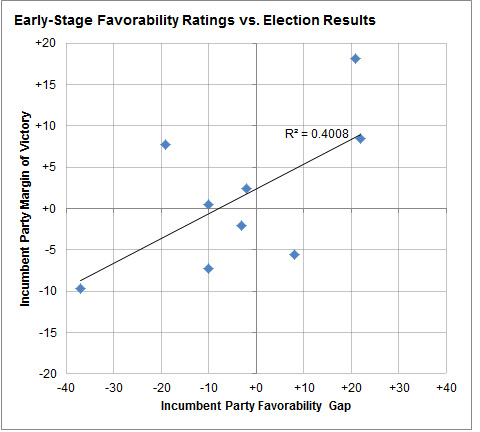 If we look at favorability ratings in the late stages of a presidential race, however — as measured by an average of New York Times/CBS News polls conducted from September of the election year until the election date — we find a much stronger relationship. Although there is not data on this for 1976, the candidate with the stronger net-favorable rating in the late stages has won every election since 1980, and there has been an almost-perfect correspondence between the margin of the favorability gap and his margin of victory or defeat in the popular vote. 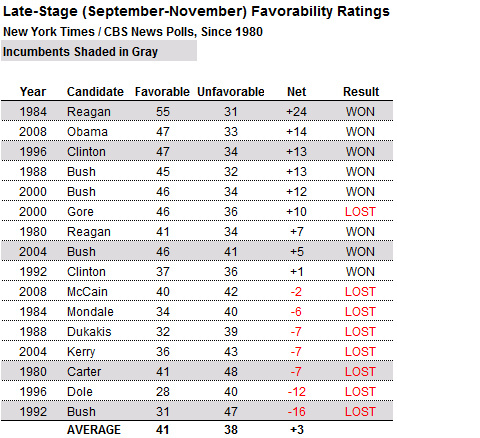 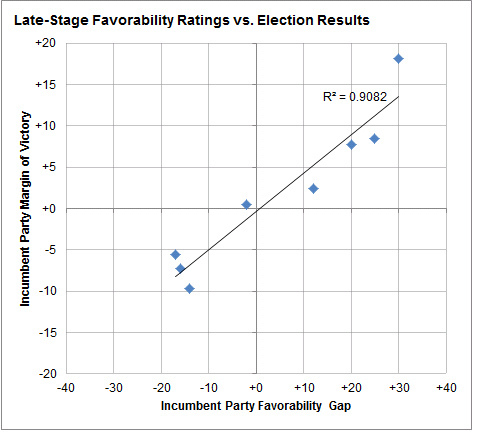 Still, this leaves much open to interpretation: are favorability ratings an important causal factor in the vote or, instead, more just a correlate of them? If, for instance, elections are dictated by economic fundamentals, it is likely that voters will come to view the incumbent favorably when it is easier to find jobs. It might also be the case that they will come to view the challenging candidate less favorably under these circumstances since he will have a tougher argument to make and may have to resort more to negative campaigning and personal attacks.

If you like, you could place the favorability ratings along with other factors like economic performance and approval ratings into a regression analysis. If you run those numbers, it seems to suggest that they do matter to some extent, controlling for the other variables. However, this just isn’t a very powerful test since these measures (particularly favorability ratings and approval ratings) are highly correlated with one another and since the sample size is very small. Testing 3 or 4 highly correlated measures on a sample of just 8 elections since 1980 is not remotely adequate for hypothesis-testing.

So we simply don’t have a very good empirical way to answer this question; there isn’t enough data. Nor, for that matter, do we have a good way to tell whether something like the decline in Mr. Dukakis’s favorability ratings throughout 1988 was caused by George Bush running a superior campaign, or instead because he was challenging Mr. Bush amid a fairly strong economy.

And yet, it would also be a classic mistake of statistical inference to assume that just because we cannot “prove” a hypothesis to a high degree of confidence means that it should be ignored (or worse, rejected). It’s certainly plausible that favorability ratings do matter some, and the relationships between
favorability ratings and electoral performance have been positive historically, especially in the late-stages of a race.

Moreover, efforts to predict elections based solely on fundamental factors like the economy — that is, without looking at public-opinion data and without considering factors related to the quality of the candidates — have historically not gone very well. It is very likely that candidates and campaigns do matter some — and perhaps even quite a bit. But whether we can quantify those effects after the fact, much less predict them beforehand, is a much more challenging question.

The most sensible takeaways, I think, are as follows:

2) The favorability deficit between Mr. Romney and Mr. Obama is more likely to be meaningful the longer it persists. If, for instance, we still see this favorability deficit in July — and certainly if we see it in September or October — the odds are fairly good that Mr. Obama will perform more strongly than the economic fundamentals alone would dictate and could win an election that he is otherwise “supposed” to lose. Of course, this will probably be reflected in head-to-head polls between Mr. Obama and Mr. Romney, which also become stronger predictors of the election outcome as November draws nearer.

My guess, for what it’s worth, is that we will see some improvement in Mr. Romney’s favorability numbers over the next month or two. It has not been uncommon in the past for a candidate’s numbers to decline while he is actively engaged in a primary, but for him to go through a honeymoon period once he begins to wrap up the nomination.

We’ll have a better sense for where Mr. Romney’s numbers are likely to settle in, and whether they represent a real concern for him or just a transient annoyance, once the general election campaign has become more substantive a couple of months from now. For the time being, I’d consider them a negative but fairly minor factor when we evaluate his chances at victory.