Chris Bowers makes the case that the four retiring Republican senators — George Voinovich, Mel Martinez, Sam Brownback and Kit Bond — are a potential source of Democratic votes. This makes a lot of intuitive sense: it’s fairly safe to assume that Congressmen are always are concerned about re-election above all else, and if re-election is no longer on the table for them, presumably they might be more inclined to buck the party line.

I set up a very simple experiment to test this hypothesis, however, and it came up somewhat wanting.

Five Republican Senators retired in advance of the 2008 elections: Wayne Allard of Colorado, Larry Craig of Idaho, Chuck Hagel of Nebraska, Pete Domeninci of New Mexico, and John Warner of Virginia. If the theory is correct, then these senators should have shown somewhat more moderate voting records in 2008 and perhaps 2007 than they had in the past.

Below are the Americans for Democratic Action ratings provided for these senators over each of the eight years of George W. Bush’s presidency. The ADA is a liberal interest/advocacy group. I use their ratings instead of someone else’s as a matter of convenience, since (i) they break their ratings down into individual years, rather than two-year blocks, providing for a greater degree of resolution; and (ii) they already have their 2008 ratings out, and almost nobody else does. Higher ratings indicate a more liberal position … a rating of 100 means you’re Bernie Sanders.

This analysis is not terribly complete, however, because the ADA ratings do not have any one particular standard that carries forward from year to year. Instead, they pick a miscellany of issues that they deem to be important each year, and record each Senator’s vote on them. In some years, it might be inherently easier for Republican senators to appear more liberal, depending on what issues the ADA happens to be looking at. This is something to be particularly mindful of as we transition between 2006 and 2007/08, since the Democrats took over the Congress at that point.

So what we need to do is to set up a control group. Let’s pair each of the retiring senators with another Republican who is not retiring but who was relatively similar ideologically and/or geographically: 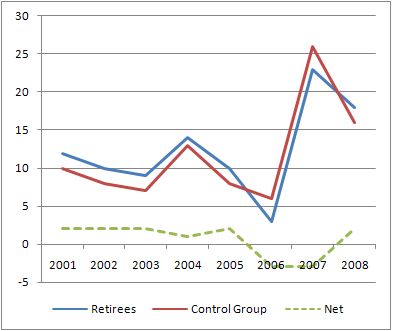 Now, I do think there are certain types of votes where a retiring senator is more likely to break ranks. These are votes on policies, perhaps like the various federal bailouts, that are widely unpopular but are arguably a necessary evil. Retiring congressman were more likely to vote for the TARP package last summer, and as Bowers points out, for the auto bailout a few weeks ago.

On the whole, though, there doesn’t seem to be much movement. Perhaps old senators — like most old people — are fairly set in their ways. Perhaps also they are voting their conscience — but being Republicans, they have a fairly conservative conscience.

Most of the key pieces of the Obama agenda, moreover, are fairly popular — the “big three” agenda items of the stimulus, health care, and energy policy certainly included. If I’m Obama, I’m not sure I wouldn’t rather have someone like Voinvoich or Martinez subject to the usual electoral constraints on these issues than being free to vote their conscience.