The results of my project with New York magazine to rate New York City’s neighborhoods along a number of objective statistical dimensions are now live. This was a fairly grueling and exhaustive project; people are rightly proud of their neighborhoods, and I don’t think you dare to do something like this without being pretty careful about it. With that said, there’s a lot of reasonably high-quality data available on New York and its neighborhoods, so I hope we were at least able to get a little closer toward the truth.

If you want to look at a static set of rankings, Brooklyn’s Park Slope ranked first, followed by Manhattan’s Lower East Side and Queens’s Sunnyside. But that’s not really where the utility of this project is. The coolest part, rather, is an interactive applet that allows you to determine for yourself the relative importance you attach to 12 different categories of data (housing cost, housing quality, transit/proximity, crime, schools, green space, food/restaurants, health and wellness, shopping and services, diversity, “creative capital” and nightlife). If you play around with the applet for long enough, you’ll find that it’s fairly easy to slot any of 15 or so neighborhoods into the top position, and any of 40 or so of the 60 that we evaluated into the top ten.

So in some sense, every neighborhood is a potential winner, especially given that 12 dimensions isn’t really enough to capture all the eccentricities that go into someone’s choice of neighborhood. Maybe you don’t just want good food nearby, but good Italian food; maybe you don’t just want to be near any old park, but near Central Park. We evaluate commute times based mostly on travel times to a group of destinations in lower and central Manhattan (as well as things like the density of train coverage), but most households will have one or two particular locations that they have to commute to for work (or recreation). If you’ve got Mets season tickets, fly out of LaGuradia 50 times a year, and work near Grand Central, something on the 7-train like Woodside, Queens will be more convenient for you than something in Brooklyn’s brownstone belt.

With that said, there were some general patterns that emerged:

* I strongly suspect that there is something of a premium associated with living in Manhattan itself. For example, if you compare Brooklyn Heights with the Upper West Side, they are similar in most respects — both are leafy, quiet, not-very-diverse, family-oriented neighborhoods with average (relative to NYC) food and nightlife, aesthetically pleasing and well-maintained homes, and similar transit times. But 800 square feet of apartment space costs a ridiculous $2,575 per month in Brooklyn Heights and a much-more-ridiculous $3,650 per month in the Upper West Side. There are a lot of examples like this, where a Manhattan neighborhood isn’t obviously superior to a Brooklyn or Queens neighborhood but is considerably pricier; a comparison between Harlem (Manhattan) and Fort Greene (Brooklyn) follows this pattern, for instance.

* Housing costs in New York appear to increase somewhat exponentially with increasing neighborhood desirability, whereas in the other city I’ve lived in as an adult (Chicago), they’re fairly linear. In New York, the five most expensive neighborhoods are about 5x as expensive as the median neighborhood on a price-per-square-foot basis; in Chicago, the ratio is just 2:1. There might be any number of reasons for this, but I suspect that a lot of it has to do with the fact that in cities like Chicago that are even slightly less dense, if you want to pour more money into your home you can usually do so by getting a bigger home. In New York, the constrains on space are such that to a large extent, the only real variable you can permute is where you live, and the most desirable neighborhoods may be priced in at a super-premium. Neighborhoods like the West Village, Tribeca and Soho are really nice places to live (they’d rank 1, 2 and 3 on the list if cost were not considered), but they’re really, really, really expensive. 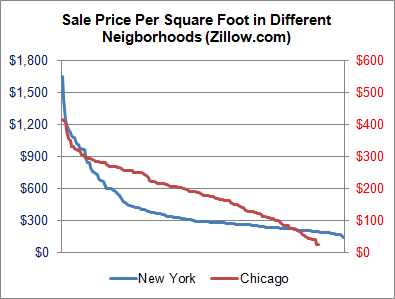 * There seem to be times when the idea of a neighborhood that’s on its way back gets a little ahead of itself. Two neighborhoods, for instance, that are much nicer places to live than they were 10 years ago (Chinatown and Harlem) nevertheless came out as probably being a bit overpriced. The schools and crime rates, in particular, still lag behind in Harlem, as does the housing stock and cleanliness of Chinatown. Perhaps people are speculating about which neighborhoods will be cool five years hence and prices (especially in the for-purchase market) reflect that. But who knows if they’re guessing right: the new new thing might have stolen their thunder by that point.

* Not to encourage gentrification, but if I were buying property as an investment right now, I’d look toward places that are cheap relative to those qualities that take the longest time to upgrade or repair — particularly transit lines, and to a lesser extent greenspace and the quality of the housing stock. That might mean places like Long Island City and Sunnyside (Queens), Prospect Heights and DUMBO (Brooklyn), Washington Heights (Manhattan) and perhaps even some portions of the South Bronx near the train.