It’s championship week in men’s college basketball, the last chance for schools to make an impression on the selection committee before the NCAA tournament field is announced Sunday evening. If you’re a bubble team, you’re hoping a strong showing in your conference tournament can persuade the committee to put extra weight on those games, perhaps to the point of ignoring a previously spotty track record.

Figuring out how much weight to give a late hot streak — as opposed to a team’s season-long résumé — can be tough for the committee. Fans filling out their brackets face the same decision. Conference tournaments might be the first chance you’ve had to see some schools play; a deep conference run could make the difference between marking a team down for an early exit or slotting it into the Final Four. But should it? Or is it simply recency bias to think a breakout conference tourney performance matters in the NCAA tournament?

To take a few preliminary stabs at answering that question, I computed pre- and post-game Simple Rating System (SRS) scores for every conference tournament and NCAA tournament game since 1985 (when the NCAA field expanded to its familiar 64-team format), using them to establish each team’s expected win probability1 going into a given game.

If teams that had surprising conference tournament runs (relative to their pre-tournament ratings) tended to carry that magic over into the NCAA tourney, we might expect there to be a relationship between how many “extra” wins a team had in each tournament. Take the 2010-11 Connecticut Huskies as an example: They won five Big East tournament games against an expectation of 2.5 (the ninth-most-surprising conference tournament performance of the past 30 years) and then proceeded to rattle off six NCAA tournament wins versus an expectation of 3.6 (the 12th-most-surprising NCAA run in the same span).

For UConn, the conference tournament was a stepping stone to bigger things.

But here’s the catch: Those Huskies were the exception, not the rule. Across the entire population of NCAA tournament-bound teams since 1985, there’s practically no relationship between how much a team outperforms its expectations in the conference tournament and the same metric in the NCAA tournament.2 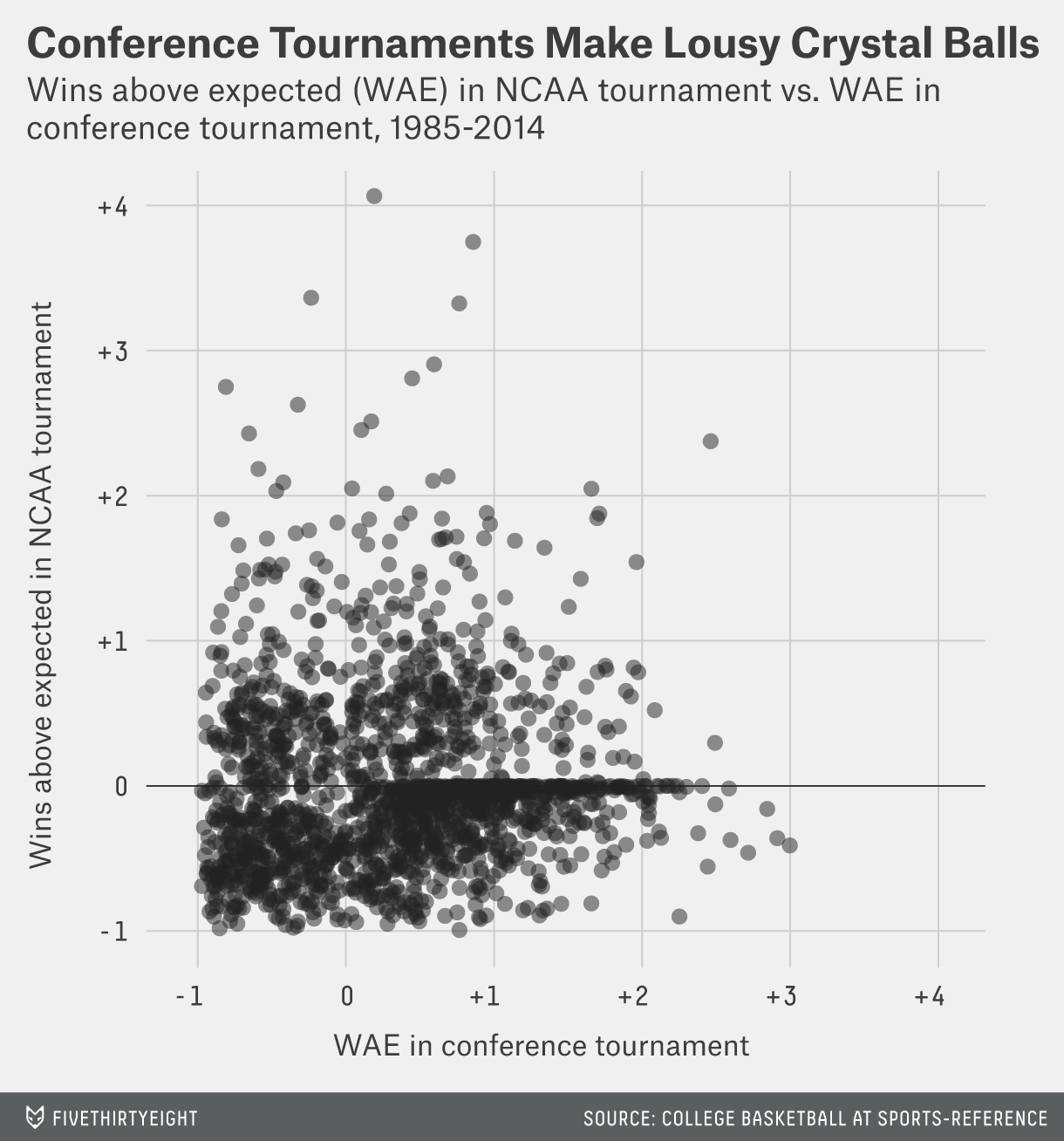 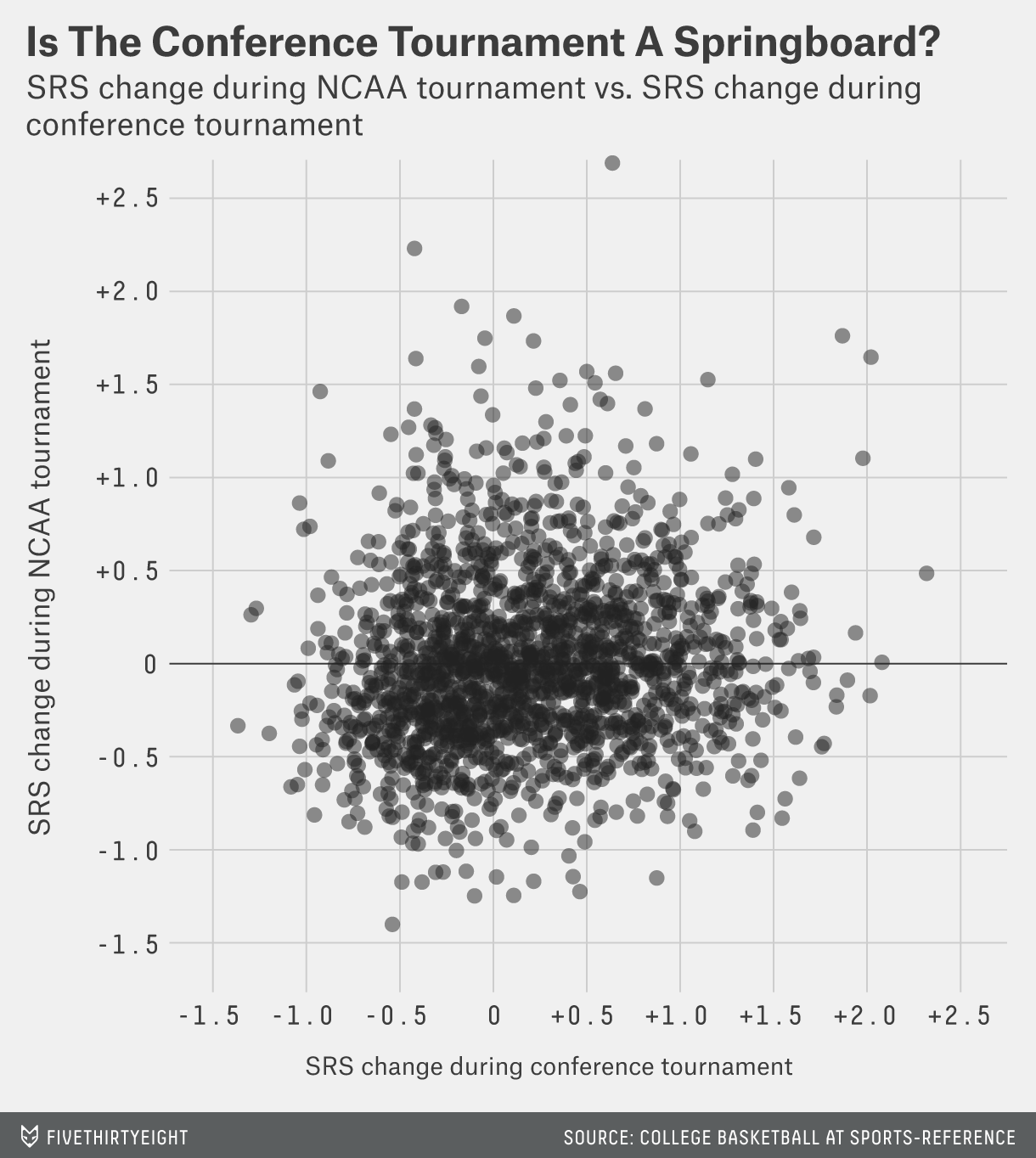 The admitted flaw in both approaches is the same one I ran into when evaluating which college basketball coaches outperform NCAA tournament expectations based on seeding. Such a method ostensibly captures underperformance in the final game of a tournament, but it doesn’t detect the missing future wins expected of a favored team going forward. Moreover, these results shouldn’t be taken to say that conference tournaments have no predictive value. A team’s post-conference-tourney SRS is slightly more correlated with its eventual NCAA tournament wins than its rating before the conference tourney began.

However, this analysis does serve as a warning against putting too much emphasis on the conference tournament relative to a team’s entire body of work, especially when it comes to picking unexpectedly hot conference tournament teams to go further than you’d otherwise predict for teams with their résumés.