There’s a healthy debate to be about whether Blue Dog Democrats will be helped or hurt by voting for the President’s health care package. The answer, in all likelihood, is some of each. The national environment will probably be better for Democrats — maybe much better — if some sort of health care bill passes. On the other hand, the local environment, holding other factors constaant, may be worse for those who vote in favor of the package. This Real Clear Politics article from Sean Trende is somewhat overargued, but history (and the academic literature) from 1994 is pretty clear that voting for unpopular initiatives can be perilous to a Congressman’s career prospects. How the scale balances in any particular district is hard to say. But generally speaking, for a Blue Dog in a fairly conservative district (not necessarily one like Jim Cooper, who’s actually in a fairly liberal district), the optimal outcome is probably that he votes against the health care bill but that the health care bill passes. That’s why Nancy Pelosi and Harry Reid’s vote-whipping skills are going to be so essential: they have to help Democrats out of a prisoner’s dilemma in which each member’s individual interest harms the party’s collective interest. It’s also why if a health care bill passes, it’s almost certainly going to be by a very narrow margin.

The other, more straightforward way out of the prisoner’s dilemma is if health care becomes more popular. I wouldn’t rule this out — depending on how the President’s big speech goes. But Democrats have to be prepared for the possibility that the numbers won’t improve very much.

Against this background we have the added contingency of the public option. If it were the case that the inclusion of a public option made the health care bill less popular, then the solution would be simple: drop it like a hot potato. The health care bill can’t afford to become any less popular; it’s already at the precipice where any further erosion in public support could render it impossible to pass. (For the time being, the numbers seem to have stabilized, but remain fairly poor).

However, this is not in fact the case. Although there has been some questionable polling on both sides of the public option debate, it seems on balance to be fairly popular. And irrefutably, it is more popular than the health care package is as a whole; one poll, in fact, found that a clear plurality of voters think dropping the public option would make the bill worse rather than better. In addition, the public option appears as though it would be deficit-reducing. Why then, does the public option appear to have become such a sticking point?

The second answer, which undoubtedly also plays a part, is that some of these Blue Dogs are not merely looking out for their constituents but also for their corporate donors.

Still, this seems somewhat insufficient to explain the disconnect. And I have another theory too: a potential third leg to the stool. Namely, I wonder if some Blue Dogs aren’t opposed to a public option precisely because liberals support it. The way most of us orient ourselves in life is through relative, rather than absolute, means; we’d rather be making $40,000 if our neighbors make $30,000 than be making $50,000 if our neighbors make $100K. Perhaps some Blue Dogs are looking at the public option and thinking: if these liberals think it’s that big a deal, there must be something wrong with it. Perhaps there’s even some of this coming from conservative elements of the White House, as this Politico article asserts:

On health care, Obama’s willingness to forgo the public option is sure to anger his party’s liberal base. But some administration officials welcome a showdown with liberal lawmakers if they argue they would rather have no health care law than an incremental one. The confrontation would allow Obama to show he is willing to stare down his own party to get things done.

Quinnipiac polling has also shown that, while the public option has become somewhat less popular overall, its support has also become more highly correlated with ideology: 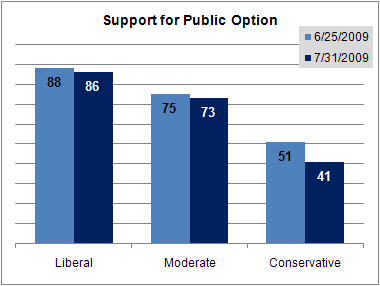 CBS/NYT polling has found the same thing if we look along partisan, rather than ideological, fault lines: 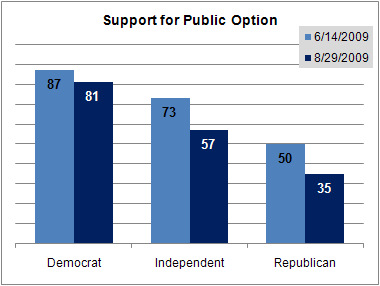 I wonder, in other words, whether the insistence of some liberals on the public option hasn’t tended to move the Overton Window in the wrong way, making it seem like more of a partisan issue than it really is, or at least ought to be. That it’s come to be seen as the sine qua non of an acceptable liberal health care package may be reason enough for Blue Dogs — especially some of the more slow-witted ones — to oppose it.

I don’t know that I’d fault progressive activists for this — conservatives have been making a big deal about the public option from day one too. But I do think their objectives have been a little muddled. Ezra Klein is right about this: it’s a legitimately tough decision for a Blue Dog as to whether to support health care or not. About two-thirds of Blue Dog Democrats voted against the health care packages as they were making their way out of the House tri-committee. They are not bluffing. Blue Dogs are not going to be persuaded by threats which imply that progressives would be willing to cause health care reform to fail — that might have worked two months ago, when the health care bill had better numbers, but it has now become unpopular enough that they are probably largely indifferent to this possibility. Instead, they’re going to be persuaded by evidence that the public option will make health care reform more popular in their districts: either directly (as with these polls showing that the public option itself is popular) or indirectly (by promoting cost-control). But to take an issue where public opinion is in your favor and to turn it into an ideological litmus test when you’re facing an increasingly stiff headwind is almost certainly a mistake.