April showers bring May flowers — or so we’ve been told — but it hasn’t been a remarkably soggy spring in much of the United States. Swaths of the western and southwestern U.S. are in the throes of moderate-to-exceptional drought. Rainfall in recent weeks has been near average on the Atlantic Coast and below average in the parts of the Midwest, according to the National Weather Service.

So, what does this mean for May flowers?

Rain, in general, has an effect on timing and abundance of flowering, said David W. Inouye, a biology professor at the University of Maryland, College Park. Inouye, who has studied bloom times in the Rocky Mountains, noted that some plants flower at the start of a rainy season and that some species might flower a second time in late summer, following a good soaking.

But for most species, first flowering is more closely tied to temperature than to rain.

According to a 2013 paper in the PLOS ONE journal, flowering times in the eastern U.S. for “many spring-flowering plants have become earlier as a result of recent climate change, but it is uncertain if flowering times will continue to advance as temperatures rise.”

April is “typically a wet month in many places in the U.S.,” one of the paper’s authors, Libby Ellwood, said in an email. “The plants may not be aware of this proverb, but they rarely have to worry about having enough water in the spring to start growing and producing flowers. … But the water itself isn’t dictating flowering times the way that temperature is.”

In the chart below, from the PLOS ONE paper, each dot represents the mean first-flowering date of sampled species (representative species included 1. serviceberry; 2. marsh marigold; 3. pink lady slipper; 4. rhodora; and 5. nodding trillium) for a given year in Massachusetts. The regression line was estimated from pre-2010 data. The 95 percent prediction intervals for 2010 and 2012 average first-flowering dates are indicated with vertical lines. 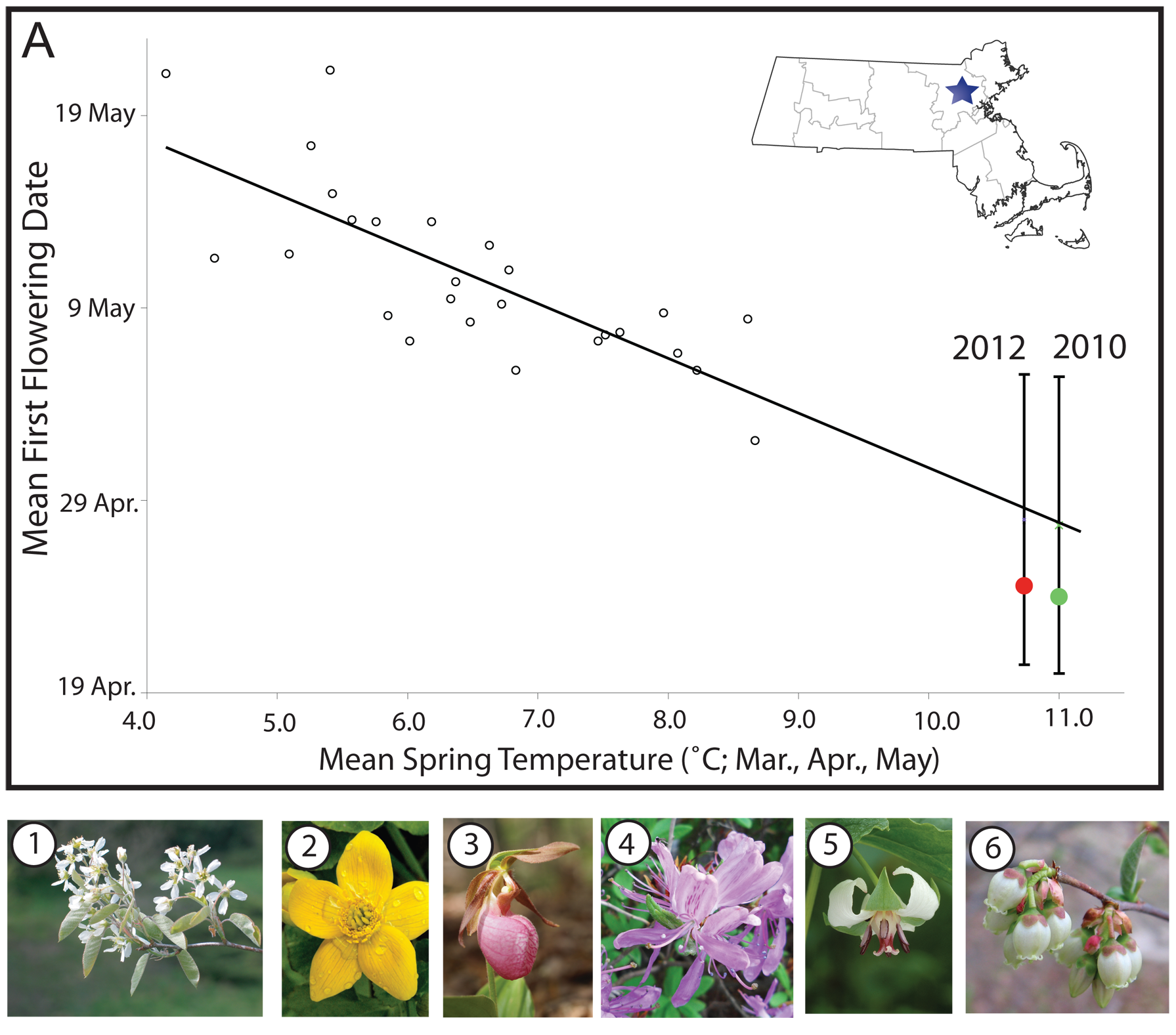 Specific flowers have showed “remarkable shifts in flowering times,” the authors wrote. In 2010, 13 of the 32 Massachusetts species they tracked had their earliest flowering date; two years later, 14 different species achieved that designation. For example, records initiated by Henry David Thoreau in 1852 noted that the highbush blueberry had flowered in mid-May; in 2012, it flowered April 1.

Does all of this mean that “March showers bring April flowers?” Or, more accurately, “Warm temperatures in March bring April flowers”? (That doesn’t have the same ring to it, does it?) Inouye pointed out the occurrence of “false springs,” warm spells that trigger flowering but are followed by a hard frost — so early flowers might die. Pennsylvania, for example, has lost apples, peaches and other crops in recent years, he said.

Ellwood said it’s “likely that temperatures will continue to warm and that flowering will continue to advance, at least for the near-term future. Beyond that though, it will be interesting to see if flowering can keep pace with the temperature. It is quite possible that at some point flowering time will plateau, or even be delayed, with warmer temperatures.” That’s because many plants need a dormant period of colder temperatures — a “chilling treatment,” as Ellwood called it, to thrive. If that doesn’t happen, flowers may not pop up — even if it’s warm.