At the end of a strange day at the Monte Carlo Masters men’s tennis tournament Friday, Novak Djokovic emerged as a growing threat to Rafael Nadal’s No. 1 ranking.

The world’s top four players appeared on the Monte Carlo Country Club’s red clay on Friday. Three of the four won. The lone upset victim was the least likely: Nadal had won 30 straight matches on clay before losing to David Ferrer. Like Nadal, No. 4 Roger Federer and No. 2 Djokovic each lost the first set of their matches, but they came back to win and join Ferrer and No. 3 Stanislas Wawrinka in the semifinals Saturday.

The loss left Nadal with just 180 ranking points for the tournament, which he had won eight straight times before losing to Djokovic in last year’s final. The loss also dropped Nadal further back in a little-noticed rankings-point race. In the seven months since Nadal won last September’s U.S. Open, Djokovic has amassed 6,830 ranking points to Nadal’s 4,800 (including the results through Friday at Monte Carlo). Federer and Wawrinka aren’t far behind Nadal’s total and they, along with Djokovic and Ferrer, will split the remaining 880 ranking points available in the Monte Carlo tournament. Djokovic, who has won the last four Masters events and is the defending champion in Monte Carlo, is the favorite to collect most of those points.

The official rankings are based on the last 12 months, and these split-season rankings aren’t readily available; they’re my best approximation from the players’ ranking breakdowns on their ATP World Tour Web pages. The advantage of these split-season rankings is that they show who has amassed the most points, most recently. Those players who’ve earned points recently are at an advantage in future rankings because points drop off a year after they were earned. About two-thirds of Nadal’s points are due to drop off by the end of the U.S. Open; about 40 percent of Djokovic’s will fall off in that time. 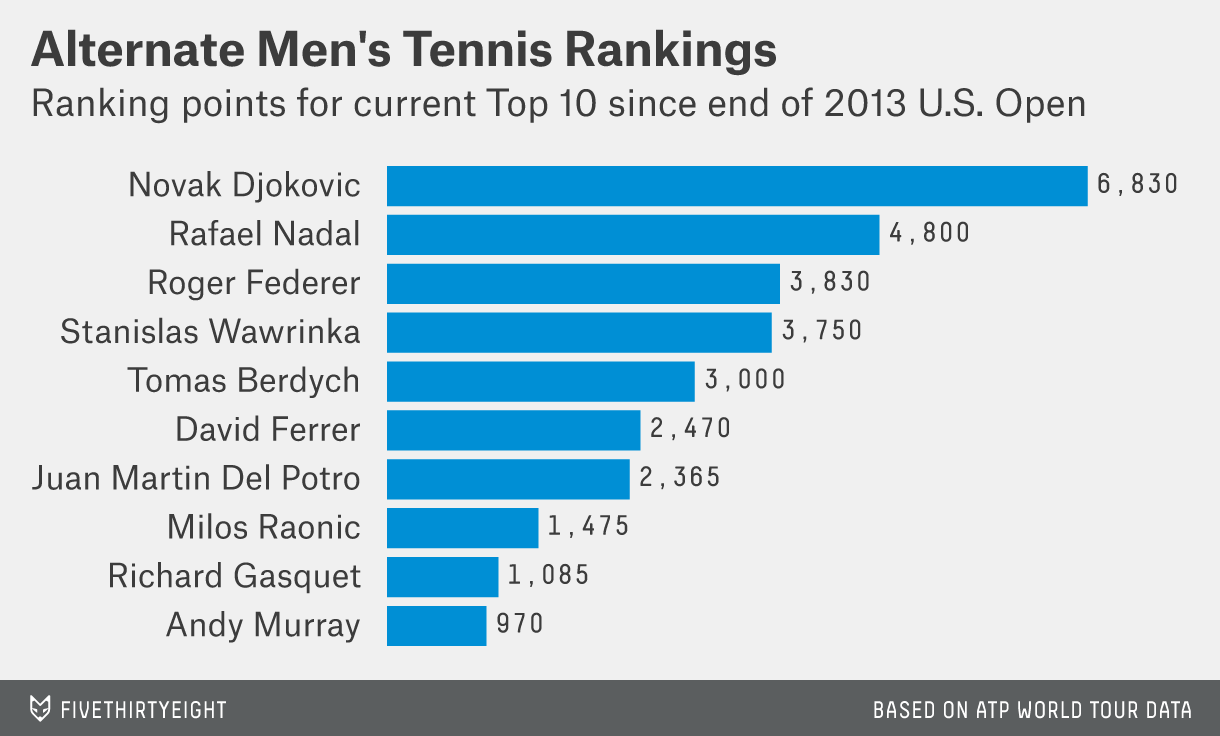 Djokovic still has work to do to overtake Nadal for the No. 1 ranking that Nadal seized from him last October. Nadal got there by sweeping the clay events at Barcelona, Madrid and Rome, before winning his eighth French Open. Nadal, the world’s best clay-court player, then looked like its best hard-court player (a title Djokovic mostly has held since the start of 2011) by winning titles in Montreal, Cincinnati and New York — his second U.S. Open title. That sparkling spring and summer still leaves Nadal with a lead of nearly 2,000 points even if Djokovic wins Monte Carlo this weekend. But Nadal may have to repeat his run on clay last year to hold off Djokovic before the tour moves to grass in June.