On the 161st Street subway platform, and massed in and around Yankee Stadium for Games 3 and 4 of the American League Championship Series, plenty of fans were adorned in Yankee jerseys bearing No. 2, the number of franchise icon Derek Jeter. But there was also a new number emblazoned on many jerseys and T-shirts: No. 26, the identifier of DJ LeMahieu. The first-year Yankee star has won over skeptical fans who were initially disappointed that he was the club’s big position player free-agent signee last winter, not Bryce Harper or Manny Machado.

But it shouldn’t be surprising that LeMahieu has won over so many in New York. No player since Jeter has hit more like Jeter than LeMahieu.

Jeter’s trademark inside-out approach to hitting gave him an unusual batted-ball profile and helped him to 3,465 career hits. Of all major league hitters with at least 1,000 at-bats since 2002, the only right-handed batter to hit a higher share of opposite-field balls than Jeter and also come close to hitting his share of ground balls1 — all while batting .300 — is LeMahieu.2 Jeff Sullivan noted the similar profiles last offseason for FanGraphs after the Yankees signed LeMahieu to a two-year, $24 million contract. And LeMahieu has only continued to hit more like Jeter. 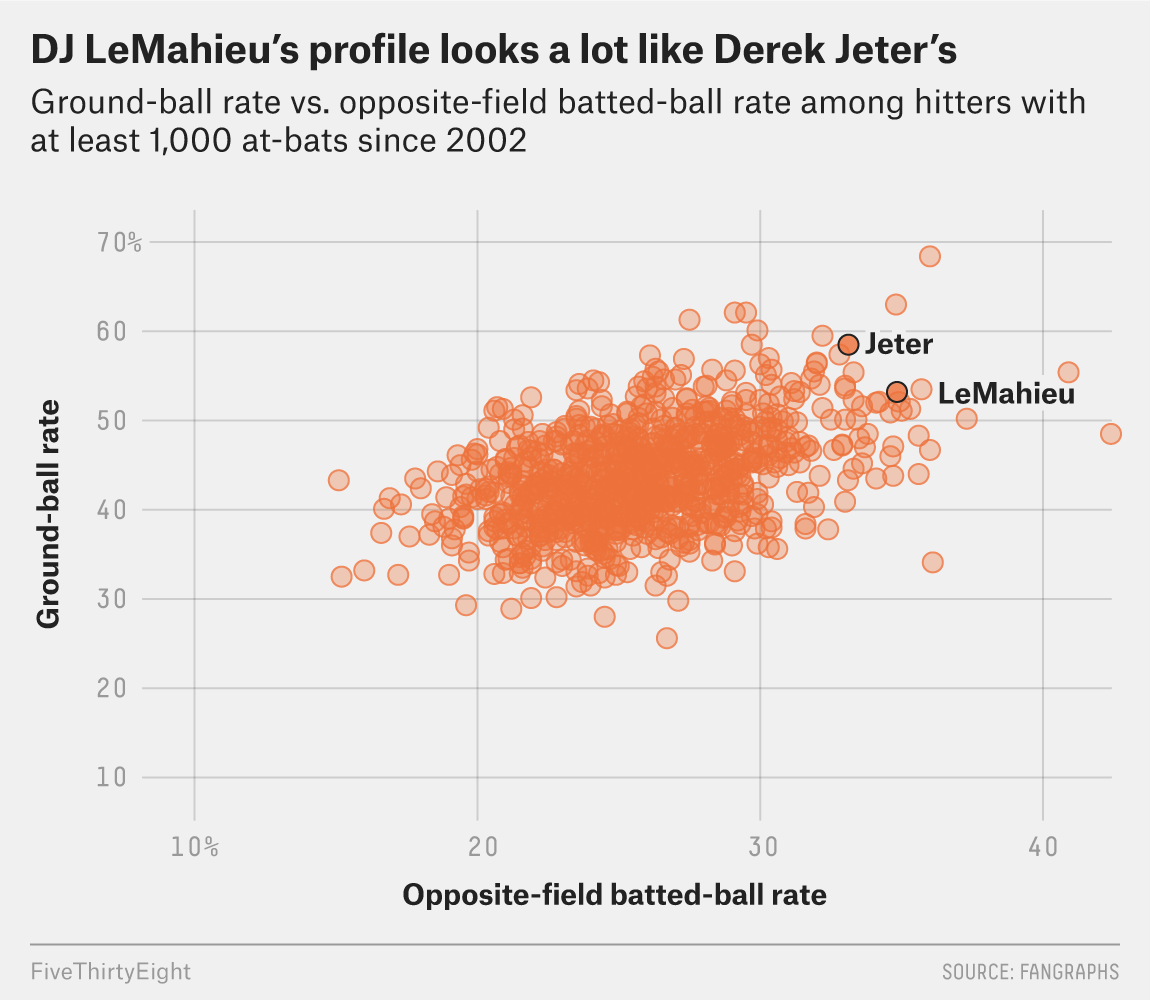 Yankees GM Brian Cashman told reporters earlier this month that his front-office assistants were pounding the table for signing LeMahieu last winter, and none more so than Jim Hendry, special assistant to Cashman. Hendry, the former Cubs GM, is close friends with LSU’s Paul Mainieri, who coached LeMahieu on the 2009 national championship team. Hendry had followed LeMahieu at LSU and through the minor leagues, and he thought the second baseman’s swing — and his versatile glove — would play anywhere.

“What I loved about him in college was that his natural swing was to right field and dead center, and he did it with a little bit of authority,” Hendry told FiveThirtyEight. “You can teach a guy to pull the ball down the road a lot easier than if you’ve got a pull guy, who isn’t a 40-homer guy, to hit the ball hard the other way. His natural swing was what I loved about him to begin with.”

That natural swing should feel very familiar to Yankee Nation.

While most ground balls are pulled, balls in the air are typically distributed more evenly around the outfield. Yet Jeter and LeMahieu own some of the most prolific opposite-field line-drive and fly-ball seasons on record since 2002, when batted-ball data became available. Among batters with at least 1000 at-bats since 2002, Jeter and LeMahieu rank second and third, respectively, in terms of the share of balls hit in the air to the opposite field. In an age of trying to pull the ball, LeMahieu is doing the opposite — just like Jeter did. Consider the Jeter and LeMahieu spray charts of balls hit in the air, from their five most recent seasons: 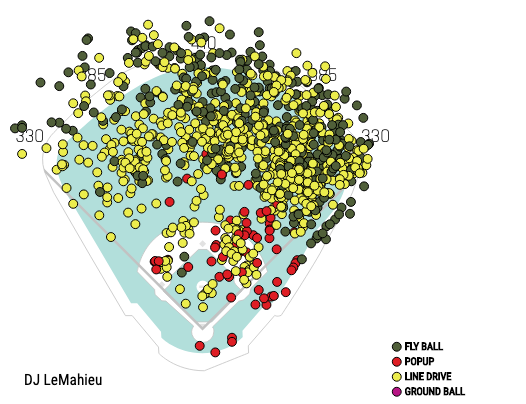 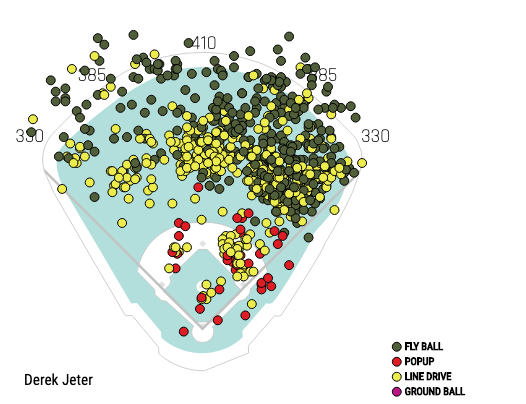 There were concerns that LeMahieu’s stats had been inflated by the thin air in Coors Field, where he spent seven of his first eight years in the big leagues. But LeMahieu’s offensive production has never been dependent on home run totals, so perhaps it shouldn’t be surprising that he has succeeded away from Denver. If anything, the switch to Yankee Stadium and its short right-field porch helped him hit a career-high number of home runs (26) this season. Twelve of those home runs — including 11 at Yankee Stadium — were to right field, which tied for the fourth-greatest total in baseball.

LeMahieu’s high-contact approach has made him even less dependent on ballpark environment. That method is perhaps aided by letting pitches travel longer before making contact, explaining his opposite-field tendencies.

LeMahieu’s approach might also be shift-proof, at least when it comes to infield defense. He led baseball this season in terms of plate appearances with a ball put in play when a shift was not in place. But in 2017, his batted-ball profile on balls in the air was so dramatic that teams employed some unusual outfield shifts. Since 2017, he has faced the second-most shifted outfield defenses in baseball.

While he doesn’t run like Jeter did in his prime or play shortstop — New York was drawn to him in part for his defensive versatility — LeMahieu does hit like Jeter. And Hendry also believes that LeMahieu excels in pressure situations. “He’s quiet, but the moment never gets to him,” Hendry said. And with New York trailing the Astros in the ALCS, the Yankees now need that calm under pressure more than ever.