If New Hampshire is a light-blue state and Massachusetts is a dark-blue one, perhaps electoral cartographers should come up with a color of its own for the District of Columbia. In 1980, Ronald Reagan lost the district to Jimmy Carter by 61 percentage points. That margin is about the closest a Republican candidate has come since Washington began participating in presidential elections in 1964 (Richard Nixon lost Washington by a mere 56.5 percent in 1972). 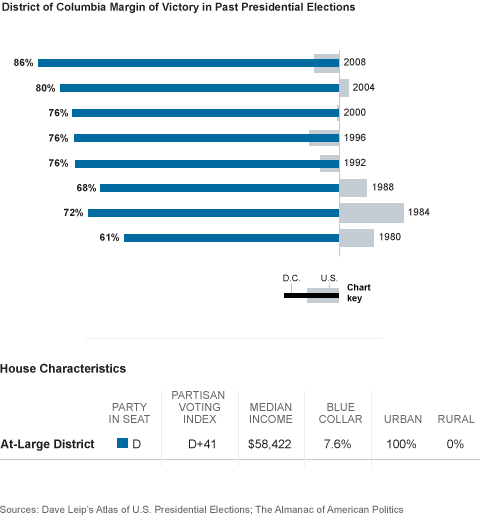 The 2012 election will be no different. On Nov. 6, President Obama will win an overwhelming share of the vote.

It isn’t hard to figure out why. Washington is a city, and a city with a large black community. Most cities vote Democratic, and many do so overwhelmingly. But those that vote Democratic by the widest margins of all, like Oakland, Newark, Washington and Detroit, are usually those with the largest black populations.

Black residents became a majority in Washington in the 1960 census, but they always made up a large portion of Washington’s population. In the 1790s, about 1 in 4 Washington residents were black. In the 1970s, the black population peaked at 71 percent, after many white residents moved to the suburbs.

Over the last decade, however, Washington’s economy has thrived, and young, affluent, mostly white professionals have flooded into the city. Highly educated new residents flowed into downtown neighborhoods like Chinatown and the Penn Quarter, forming white pluralities. Forty-nine percent of adults in the District of Columbia now have a college degree. 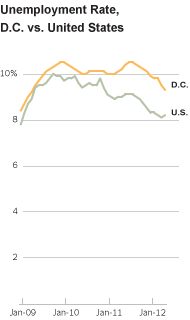 At the same time, many middle-class black families have followed the opposite path and moved to suburban communities in Maryland and Virginia. And the high-income newcomers have forced rents and property taxes up in many neighborhoods, pushing out less wealthy longtime residents, many of them black.

The 2010 census found the city’s black majority barely intact, and demographers have reported that the black share of the population may have fallen below 50 percent since then.

Calls to limit gentrification of black neighborhoods have increased. In a city where the electoral choice is between left and further left, many voters now judge local candidates by whether they seem to represent new residents or old, Ms. Norton said. The city is plagued by gaps in both education and income.

Both longtime and new Washingtonians share unhappiness over the district’s lack of a voting member of Congress, said Ms. Norton, who can serve on committees and speak on the House floor but cannot vote on legislation. Efforts to give Washington’s representative voting rights in Congress have come close to success, but have so far failed. More than 600,000 Washingtonians are still taxed without representation, or at least without voting representation.

So on Independence Day, a holiday marking, in part, the struggle for political representation, Ms. Norton was planning to walk in a Fourth of July parade. But, while most people would be carrying an American flag, “I will be waving a District of Columbia flag” to symbolize Washingtonians’ struggle for full voting rights, she said.

Unless Mitt Romney personally beats back an alien invasion — and maybe not even then — Mr. Obama will win the District of Columbia’s three electoral votes.