Our Senate forecast update from two weeks earlier concluded that the Republicans were unlikely to take over the Senate, partly because they aren’t running credible candidates in enough races, and partly because they’d have to completely run the table even where they are.

Both these challenges remain in place. There are several important contests, like Ohio, California, and perhaps Colorado and Florida, where it’s not clear that Republicans are favored at all, let alone by a comfortable margin. And with the decisions of Tommy Thompson and George Pataki not to run, the Republicans will have no margin for error.

Subsequent to the publication of our analysis, however, SurveyUSA came out with a new poll in Washington State, showing the incumbent Patty Murray 10 points behind prospective GOP challenger Dino Rossi. Rossi has yet to declare for the race and very well may not — as we learned with Thompson and Pataki, it is dubious to assume that someone will run before they decide to do so, especially this late into the cycle. Nevertheless, the poll suggests that picking up a 51st seat is still a plausible scenario for Republicans.

On the other hand, the poll was quite out of step with other recent surveys of the same race, including one today from Rasmussen Reports: 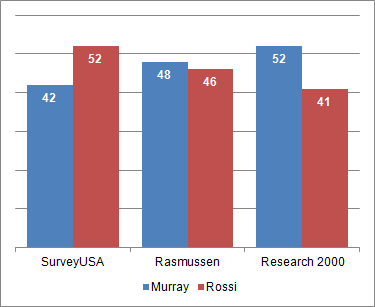 It is not surprising that Research 2000 shows the Democrat in a significantly better position than Rasmussen. Rather, that is fairly typical, since both pollsters have had strong house effects. But what about that SurveyUSA poll?

Unfortunately, I just don’t know that there’s a terribly satisfying answer to this one. SurveyUSA is generally a quite strong pollster, although they’ve done disappointingly little polling this year that would allow us to place this result into context. Their poll does use a likely voter screen, but then again, so do both of the others.

The poll does contain a few oddities. For instance, 52 percent of the respondents are gun owners, whereas the actual percentage of gun owners in Washington is about 33 percent. And the poll also has Murray trailing Rossi 49-46 in Seattle and its suburbs, whereas Rossi lost to Chris Gregoire 59-40 in Metro Seattle in 2008’s governor’s race.

Our regression model, which is formulated by looking at the results of polling in other states, thinks that Murray should be about an 8-point favorite over Rossi based on her approval ratings and the political tilt of Washington state. It just doesn’t think that the national environment has gotten quite bad enough for Democrats that a relatively noncontroversial incumbent like Murray would be favored to lose in a relatively Blue state, although it may underrate Rossi slightly because his name recognition is strong relative to his electoral experience (if Rossi were credited with being the equivalent of a U.S. Representative instead, it would give Murray a 2-3 point advantage).

So perhaps the poll will prove to be a modest outlier. Nevertheless, Rossi does not to defeat Murray by 10 points to take her seat; as Rossi himself knows, elections are often much closer than that. And the fact that SurveyUSA — a good pollster which has not historically had a much of a house effect — shows this kind of a result for a presumed-to-be-safe incumbent ought to be a bit scary for Democrats.

EDIT: Adding to the confusion, an Elway poll of registered voters has Murray with a 51-34 lead over Rossi. Not even going to try to unpack this one — this has been a weird year for polling and it’s just hard to know who you can trust; hopefully things will converge some before we get to the stretch run in August/September.