In 2004, the Bush-Cheney re-elect campaign ran what was then the most sophisticated, state-of-the-art field organizing campaign in presidential history. Four years later, the Democrats, led by Barack Obama’s David Plouffe, built a field organization that made the 2004 Republican model look antiquated. Along the way, both parties figured out new and inventive ways to identify, register and mobilize voters these past six years. 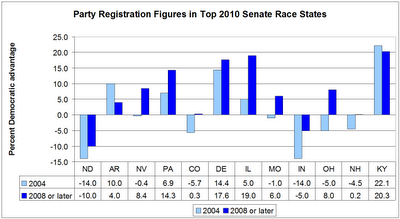 Because the current set of US Senate seats up for election this November were most recently on the ballot back in 2004, the net effect of the Bush and Obama organizational efforts during the two presidential cycles of the past six years can be measured, if incompletely and imperfectly, in the registration differences between autumn 2004 and today.

What is the net partisan effect of registration differences* during this period in the top dozen most competitive Senate contests (as ranked by Nate, left)?

Before answering that, let’s be clear that comparing the final 2004 registration data with the most current available figures provides only a baseline indicator of partisan competition in these states–a starting point of sorts. Doing so cannot account for potential turnout differences between the parties this fall, in a midterm cycle; it cannot account for partisan defections by voters registered with one party who vote for candidate’s of the other, nor the behavior of independents and unaffiliated voters; and registration disadvantages can of course be overcome by better candidates and campaigns, and vice versa.

Those qualifiers aside, in 10 of the top 12 Senate race states, Democrats are in a better registration situation today than they were going into the 2004 elections. The two exceptions—Arkansas and Kentucky–are not particularly surprising, given that they include many of those 22 percent of the counties nationally where Obama underperformed relative to John Kerry in 2004.

Again, registration gains or losses aren’t everything. Turnout drops off during midterm cycles, and comparisons between registration baselines in a presidential cycle (2004) with that of an upcoming midterm cycle (2010) are imperfect. What I think we can safely conclude is that there is the potential for the Democrats to capitalize on a net positive field organizational gain during the last few years in order to buffer their expected losses this fall. The degree to which they are successful in doing so–and the recent decision to bring David Plouffe back into a prominent political role advising the White House is concession that there is a problem here that needs solving–will not be known until we get the results this November.