Last week, we tracked the increasing use of the word ‘pork’ in connection with the economic stimulus package. But what about another important word: one that tends to cast the stimulus in a more favorable light. That word is J-O-B-S, jobs, jobs, jobs: 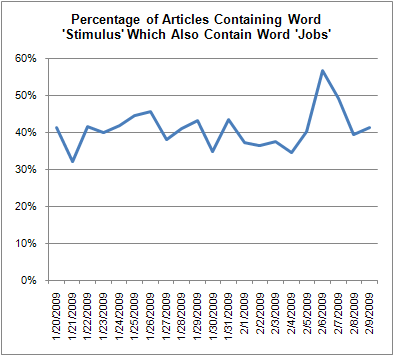 The percentage of articles on Yahoo! News that contained the word “stimulus” and which also contained the word “jobs” had been holding very steady at about 40 percent for each day since Barack Obama’s inauguration. But then, the figure shot up to 57 percent on Friday, and then 49 percent on Saturday — the days on which the Obama administration appeared to salvage the stimulus package. Much of this, undoubtedly, was the result of the jobs report that came out on Friday, but the Obama administration was simultaneously trying to grease the wheels by putting out estimates of job creation in each individual state.

Without the fortuitous timing of that jobs report, I’m not sure that the center would have held.