In open primary states, one of the most common fears of partisans is that voters from the other party will “invade” their nominating contests, by hostile action or by invitation of a candidate, and dictate the outcome. In the July 14 Alabama Republican gubernatorial runoff, some analysts suggested that winning candidate Dr. Robert Bentley was the beneficiary of a deliberate Democratic crossover effort. At the time, I examined the returns and concluded that there wasn’t a lot of evidence for that hypothesis.

In the wake of last week’s Michigan Republican gubernatorial primary, there was an even stronger conviction than in Alabama that Rick Synder’s victory was attributable in no small part to Democratic voters, partly because his campaign deliberately encouraged crossover votes. Some of Snyder’s best counties, moreover, were by tradition strongly Democratic. Finally, turnout was nearly twice as high in the Republican as in the Democratic gubernatorial primary, which is an odd occurrence in a state that hasn’t gone Republican in a presidential race since 1988.

But since this issue affects not only a sense of grievance among some Republicans, but general election strategy for both Snyder and for Democratic nominee Virg Bernero, it’s worth a closer look.

First, however, a couple of disclaimers. This is not a hypothesis that is easy to test in the absence of precinct-level returns. Moreover, in the case of Michigan, there’s no directly analogous recent election with which to measure “normal” partisan turnout.

So I’m going to try to get at this question rather indirectly. If Snyder did produce a large and decisive Democratic crossover vote, one of the “symptoms” we’d expect to see is that heavily Democratic counties would produce a significantly higher share of the Republican primary vote than in prior elections.

The most recent competitive non-presidential statewide Republican primary in Michigan was the U.S. Senate primary in 2006. So a comparison with 2010 should show the latter results skewed towards Democratic strongholds.

The bar chart below shows the percentage of the total Republican primary vote in these two elections produced by the top ten Democratic counties (by percentage of the two-party vote, as established in the last competitive non-presidential statewide general election, the 2006 governor’s contest). The counties are arrayed from least heavily Democratic (Oakland) to most (Wayne). 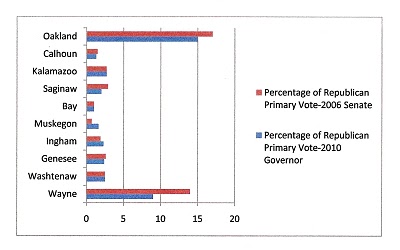 As you can see, there’s no pattern of Democratic counties producing a higher share of the Republican primary vote in 2010; if anything, the pattern is in the other direction, particularly in the two largest counties of the ten, Wayne and Oakland.

The two exceptions, Muskegon and Ingham (Lansing) Counties, don’t prove a whole lot, since Synder finished a relatively weak second in the former, and Democratic turnout in the latter (Bernero’s home county) was up as well, as compared to the county’s share of the vote in the last competitive Democratic statewide primary back in 2002.

If anything, the counties that really seemed to kick out the jams in 2010 Republican turnout were those like Kent and Ottawa, with red-hot Republican House primaries.

Again, “proof” is elusive in cases like this, in states with no party registration, and in a year like this one, when Republican turnout was up for a variety of reasons (including the aforementioned House primaries). But it sure looks like whatever Rick Snyder’s appeal to Democrats and independents might have been, he won (by 100,000 votes above second-place finisher Pete Hoekstra) because of his popularity among people–and places–prone to participation in Republican primaries. Conservatives unhappy with that result should probably focus less on crossover votes and more on the sometimes-savage competition among the three more vocally conservative candidates who split their votes. Rick Snyder had more than enough money to exploit that landscape, with or without an unusual amount of Democratic help.