The Obama administration won three major victories at the Supreme Court this week, with the justices upholding the Affordable Care Act, legalizing same-sex marriage, and preserving a legal tool that can be used to fight housing discrimination. But the administration has mostly struggled to win at the court, as a review of the past six years of cases shows. Obama’s winning percentage, when the U.S. or a federal agency is a party to a Supreme Court case, is less than 50 percent — the lowest of any president dating back to the Truman administration. 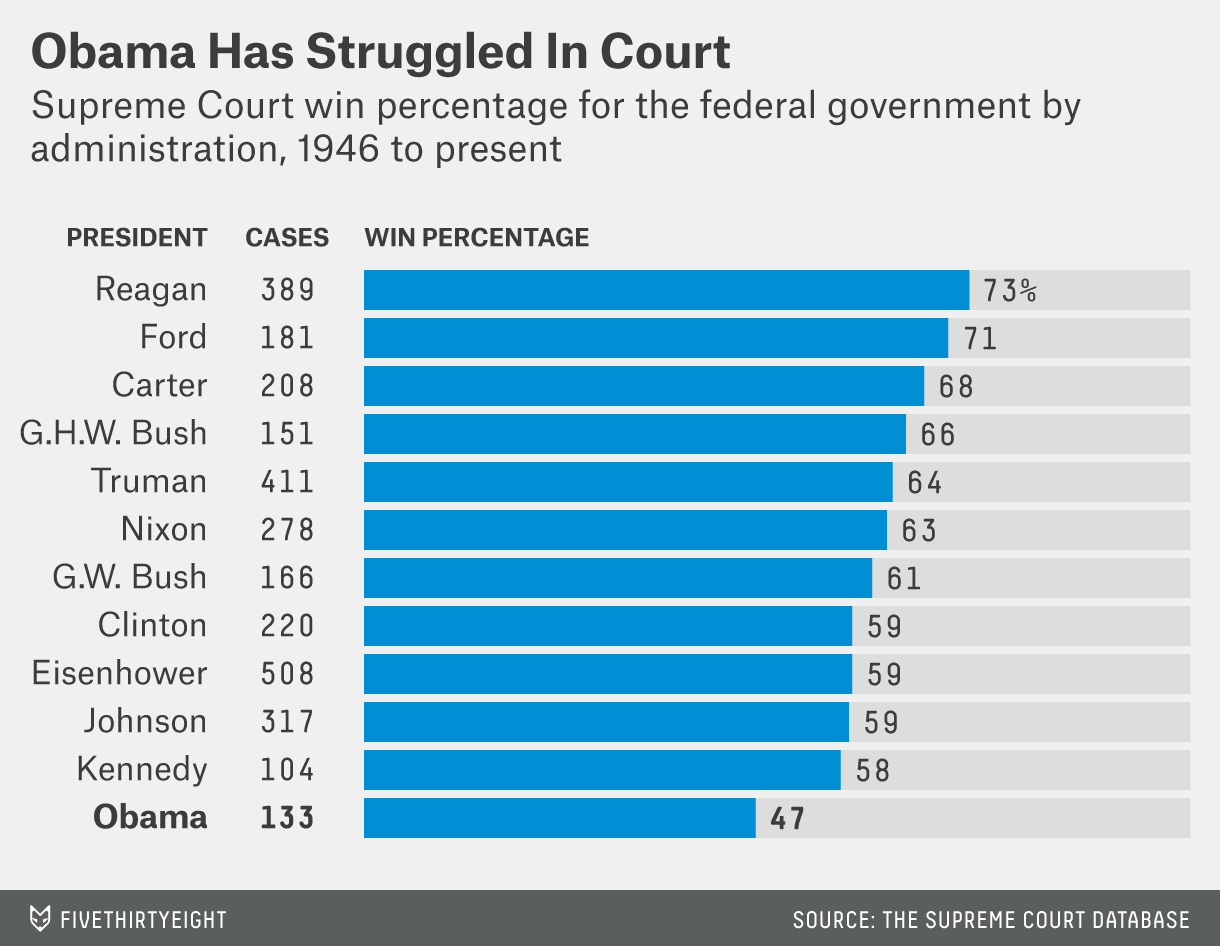 Using the Supreme Court Database, I identified all those cases in which either the United States or a federal agency was a party, as either a petitioner or respondent. The database, which shows the outcome of the cases, goes back to 1946, and we’ve added in this week’s results.

To understand this disparity, I spoke by phone with Jeffrey Segal, a Supreme Court scholar at Stony Brook University and a contributor to the Supreme Court Database. For the most part, Segal thinks Obama is happy with the court’s rulings, but he agrees that outside of the blockbusters, the administration has fared remarkably poorly.

“The court has been striking down cases involving federal agencies, which is unusual given the deference that they’re supposed to show under Chevron,” Segal said. (“Chevron deference,” named after a 1984 court case in which the oil company was a party, is the principle established by the court that gives agencies the ability to interpret statutes, as long as those interpretations are reasonable.) “This perhaps suggests that the federal agencies have been going way beyond their normal interpretation of federal statutes.” There have been 50 cases involving a federal agency since 2009.

Notably, even in Thursday’s decision upholding Obamacare’s insurance subsidies, the court did not base its ruling on Chevron deference.

Much of this is explained by Obama’s strained relationship with Congress. Obama has been aggressive in getting his agencies to do his bidding because he hasn’t had much luck getting Congress to do it. When a president has a hard time with Congress, he’s going to try to act administratively instead, said Segal.

So have Obama’s federal agencies been pushing things to the limit a bit? “Yes,” Segal said. They’ve been “more aggressively interpreting laws.”

The deference shown by the court to federal agencies has been a historical fact, for the most part, and there is scholarship on this topic back to the 1930s and President Franklin Roosevelt. In the chart above, Presidents Ronald Reagan and Gerald Ford have win percentages above 70 percent. But “Reagan and Ford aren’t the outliers,” Segal said, “Obama is the outlier.”