In a fundraising plea to his mailing list this past week, Marc Multy, the President of the anti-gay marriage Group Stand for Marriage Maine, described his opponents as having “amassed a war chest from the homosexual political elite from nearly every corner of the country to impose their will on Mainers like us.”

Indeed, the pro-gay marriage group No on 1 Protect Maine Equality has raised more than $2.30 million in itemized contributions from outside the state of Maine; this is more than the $1.82 million that Stand for Marriage Maine has raised from out-of-state.

However, most of No on 1’s advantage is based on its substantial edge in fundraising from within the state of Maine. No on 1 has raised $1.89 million from 3,766 unique contributors within the state, whereas Stand for Marriage Maine has raised just $677,000 from 422 contributors, putting it at nearly a 3:1 disadvantage. All told, No on 1 has raised 43 percent of its funds from within Maine, as compared with 26 percent for the Yes on 1 campaign. 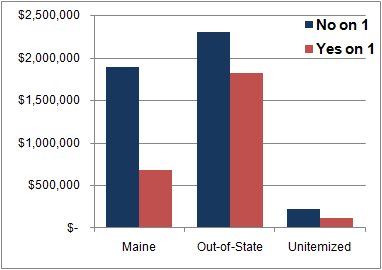 Additional detail on fundraising by the two groups, as gathered from the State of Maine’s Campaign Finance Website, is below. 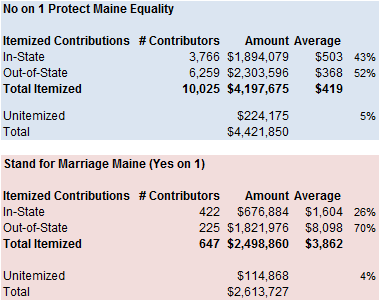 You will probably notice the large disparity in the average size of the contribution that each group has received: $3,862 for the anti-gay marriage group, versus $419 for No on 1. This is because Stand for Marriage Maine is exceptionally dependent on just two large donors: the New Jersey-based National Organization for Marriage, from which it has received $1,622,152, and the Roman Catholic Diocese of Portland (ME), from which it has received $529,666. Collectively, these two group’s represent 83 percent of Yes on 1’s fundraising. In addition, the Roman Catholic Diocese of Portland accounts for 81 percent of its in-state fundraising; without its contributions, Stand for Marriage Maine would have received just $127,218 in contributions from Mainers.

Protect Maine Equality, to be sure, has also benefited from some
heavyweight donors, earning $526,000 from Maine-based businessman Donald Sussman, and $267,589 from the Human Rights Campaign. And indeed, if you cull its donor list, you’ll find a few big-name Hollywood celebrities: it’s gotten $2,000, for instance, from Rob Reiner, $5,000 from David Geffen, and $10,000 from former U.S. Ambassador to Luxembourg James Hormel.

Overall, however, its top 10 donors represent just 36 percent of its total fundraising haul, as compared to 91 percent for Yes on 1. Most of its contributions, rather, come from small donors, who account for its 9-to-1 advantage in the number of unique, itemized contributors within Maine, and its 28-to-1 advantage in its number of unique donors from outside the state.

Although it is always risky to generalize from a single example — particularly given that the Yes on 1 campaign has been fairly inept — it would seem that the grassroots energy on this issue has reversed, with the pro-gay marriage side feeling more emboldened than the traditional marriage groups. This is true both outside the state of Maine and within it.