When the polls don’t change after a scandal happens, what do we make of it? That’s the question we’re asking after news broke on Friday, Oct. 2, that North Carolina Democratic Senate nominee Cal Cunningham had been sexting a woman who wasn’t his wife. This development seemingly presented an opening for embattled Republican Sen. Thom Tillis, who has trailed Cunningham in most polls in one of the most important Senate contests on the ballot this November.

But despite concentrated Republican attacks over Cunningham’s extramarital affair, there’s little evidence that the trajectory of the race has changed — at least so far. On Oct. 2, Cunningham had a 67 in 100 shot of winning; today, Cunningham has a 67 in 100 chance, according to the Deluxe version of FiveThirtyEight’s Senate forecast.

In other words, he was a slight favorite to win before the scandal broke and remains so today. 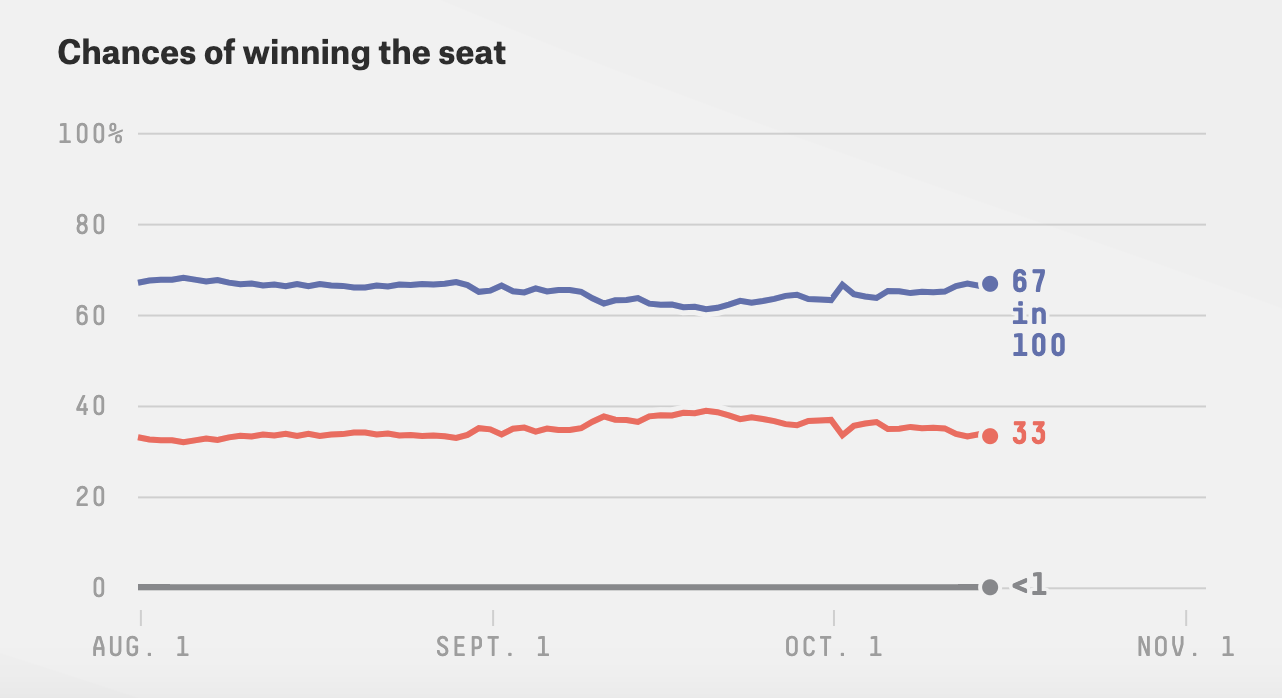 FiveThirtyEight’s Senate forecast currently gives Democrats a 73 in 100 chance of winning control of the Senate, and Cunningham’s fortunes in North Carolina are pivotal to that. If Democrats can capture GOP-held seats in Arizona and Colorado, where they have better odds, along with more competitive races in Maine and North Carolina, that would give them the bare minimum of 50 seats they need to have a shot at control (assuming they lose control of Alabama’s seat but retain Michigan’s). And as long as Joe Biden wins — no certainty, but he is favored — that would hand Sen. Kamala Harris the vice presidency and the Senate tiebreaker.

On the whole, Cunningham’s odds haven’t budged because the polls haven’t shifted. Four pollsters who have surveyed the race since the scandal broke had also polled in late August or September, and as you can see in the table below, none of them found that much of a change from their previous polls.

Of course, this doesn’t mean the scandal helped Cunningham — polls do show his reputation has taken a hit. The New York Times/Siena College’s surveys found that the share with a positive impression of him fell from 46 percent to 40 percent, and the share with a negative impression of him increased from 29 percent to 42 percent. Monmouth University’s poll had more voters who had no opinion of Cunningham, but Cunningham’s favorables still fell from 34 percent to 25 percent, while his unfavorable numbers rose from 22 percent to 33 percent.

So while this downtick in public perception hasn’t hurt Cunningham’s horse-race numbers, we can’t rule out the possibility that it will have a negative effect once votes are counted. Our past research has found that new scandals in the middle of a campaign can be a drag on a candidate’s vote share, especially in more competitive races. That’s why our Senate forecast includes a scandal variable, and Cunningham’s chances of winning did fall slightly after we added his scandal to our model — but this hasn’t shown up in the polls, at least not yet. In theory, though, Americans are harsh critics of marital infidelity. Gallup found back in May, for instance, that 89 percent of Americans said married men and women having affairs was immoral — and it’s hard to get 9 in 10 Americans to agree on much of anything these days. So we can’t rule out further revelations that keep the story in the news, like when more messages sent by Cunningham became public a few days after the initial scandal broke.

But it will be challenging for the GOP to fully capitalize on Cunningham’s scandal. First, even though Americans are quick to say infidelity is immoral, sex scandals involving politicians are nothing new for voters. So in some ways, as long as the details of this one don’t get any more lurid or troubling, it may not hurt Cunningham that much. That’s especially so when you consider that partisanship and the overall national electoral environment probably mitigate much of the damage for Cunningham. Few Democrats are likely to abandon Cunningham over the scandal, and considering Tillis’s favorability ratings are also mediocre, independents aren’t any more likely to flock to him. Moreover, the scandal has largely been overshadowed by the presidential race, as Trump’s poorly received debate performance and COVID-19 diagnosis blunted some of the impact of the Cunningham news.

This race’s trajectory isn’t locked in, by any means, but it’s good news for Democrats, who almost certainly need to win the North Carolina seat to gain a majority in the Senate.