A couple of weeks ago we looked at the track record of candidates endorsed by The Union Leader of New Hampshire, and found that they had historically performed quite strongly. Their actual vote share in the New Hampshire primary exceeded their standing in the polls at the time the endorsement was made by about 11 points on average.

Does the same pattern hold for another key early-state newspaper, The Des Moines Register, which last night endorsed Mitt Romney?

I looked at the eight candidates whom the newspaper has endorsed since 1988, when it first started endorsing in the caucuses, and compared their actual finish in Iowa to the polling-based projections that our forecasting model would have made on the day before the endorsement was made.

Six of the eight candidates beat their projections, although it was by a small margin in most cases. The clear exception was John Edwards in 2004, who was projected to win only about 13 percent of the vote at the time the endorsement was made on Jan. 11, 2004, but who surged at the last moment and received about 32 percent of the vote on caucus night. 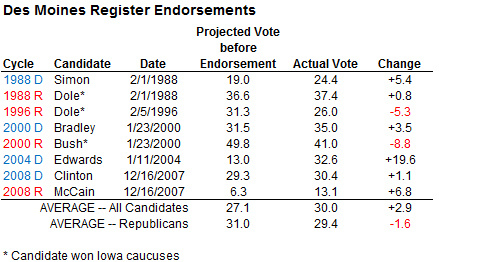 After the paper endorsed Senator Paul Simon, Democrat of Illinois, in 1998 and Senator John McCain, Republican of Arizona, in 2008, they both outperformed the polls, although neither candidate won the state.

On the other hand, the newspaper has also endorsed candidates who won, but by a smaller-than-expected margin. In particular, The Des Moines Register endorsed Bob Dole in 1996 and George W. Bush in 2000, who did worse than expected on election day. Since the “bounce” that candidates receive out of Iowa is a function of expectation as much as actual performance, both Mr. Dole and Mr. Bush became vulnerable, and they were upset in New Hampshire, losing to Pat Buchanan and John McCain, respectively.

On average, across the eight races, the candidate receiving the endorsement of The Des Moines Register has outperformed the polls by a statistically insignificant 3-point margin. The four Republican candidates in the sample, meanwhile, have on average done slightly worse than polling would have projected, although the difference is nowhere close to being statistically significant.

Still, the endorsement should be welcome news for Mr. Romney. It continues a streak of several strong days of news coverage following a good performance in the Thursday debate and Friday’s endorsement of Mr. Romney by Gov. Nikki Haley of South Carolina. Meanwhile, since the endorsement historically seems to have had a larger effect when bestowed to a non-frontrunner, like Mr. Simon or Mr. Edwards, Mr. Romney will benefit from the fact that the endorsement has not gone to a second-tier candidate like Gov. Rick Perry of Texas or Rick Santorum who could have used it for a credibility boost.