Today, there’s an article in the Los Angeles Times entitled:

A reasonable person might expect the punchline to be either that the manifest decline in Obama’s approval ratings is particularly steep among white voters, or that race-related issues are responsible for Obama’s current slump. A reasonable person would then click on the chart accompanying the article and discover… 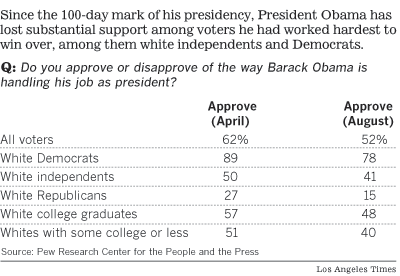 So what in the hell does the decline in Obama’s approval rating has to do with race? It doesn’t — or maybe it does, but if so, this article is evidence to the contrary.

The best part of a story like this is that it spawns its own series of sequels:

I’m not one to take some schadenfreudic pleasure in the decline of the mainstream media; the Los Angeles Times was once, and sometimes still is, a great paper. But articles like these are approximately as fresh as the latest Garfield comic strip, and have approximately as much news value.