I realize it’s a splinter movement within a splinter movement, but let’s hope those agitating for a repeal of the 17th Amendment get about as far as the vast majority of constitutional amendment advocates get, which is to say nowhere. If you want more details about these advocates, the Atlantic’s Marc Ambinder and Talking Points’ Evan McMorris-Santoro have written in detail about this latest variant of anti-government, anti-Washington mania.

As it happens, I wrote my doctoral dissertation and a few articles about Prohibition/Repeal, so I’m familiar with the politics of passing and then repealing an amendment, which is literally the rarest of occurrences in American constitutional history (n = 1). But I don’t want to talk about the political likelihood of the 17th repealers actually getting their way, which is zero. Nor am I trying to trigger a political philosophy debate about the case for and against the direct, popular election of US senators–though readers should feel free to start a thread in the comments section about that. 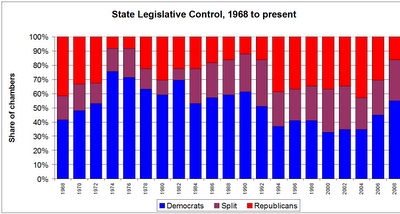 What I want to point out is how patently stupid repealing the 17th Amendment would be for Republicans and conservatives–and yes, tea partiers–based on a simple fact: Democrats have long dominated the control of state legislatures. And they currently enjoy a level of dominance unlike they’ve experienced since the late 1980s and early 1990s.

Following the 2008 elections, according to National Conference of State Legislative data,# Democrats control both chambers in 27 legislatures, to eight for the Republicans, with 14 states split. (Nebraska is unicameral and non-partisan.) Oh, and two decades ago the Democratic dominance of state legislatures included a lot more southern states, which I suppose could have produced some conservative Democrats or even a few Republicans as senators; today, that’s far less likely to happen because the set of Democratically-controlled state legislature is more non-south. In ideological terms, then, the current Democratic majorities may be closer to the post-war high-water marks in the mid-1970s.

Here is something I don’t think Republican strategists in Washington…many of them, anyway, understand about conservative voters now. Their discontent with the party is NOT about ideology. It is, quite simply, about them. The consultants. The leaders. The people who were NOT able to prevent Obama from becoming president. The people who were NOT able to prevent health care from being signed into law, despite promising that it wouldn’t be. The people who fed the bailout engine. So ideas that seem extreme and bizarre to the powers that be might be more accepted by discontented voters simply because the mainstream forces consider them to be extreme.

Well, Marc sure has a point there. I suppose if what conservatives of the tea party variety or otherwise really want is to upset the entire partisan apple cart, including if not especially Republicans, repealing the 17th Amendment would turn the trick…

…but only for uprooting the current set of Senate elites. For I suspect the replacement, state-selected senators would be more likely to reflect their respective party’s establishment, and would give Democrats a pretty solid if not unassailable majority. At that point, to change Senate party control would thus require flipping a large number of state legislative chambers, which in turn would require winning hundreds of state legislative races. And although state legislators are popularly elected, filtering US Senate selections through them would, as I said, likely make them more elitist, not less.

In any case, just as unelected senators for decades in the late 19th century and early 20th century blocked the popular election amendment proposal that eventually got the necessary two-thirds votes to go to the states for ratification, I suspect today’s senators would resist changing the manner of their selection, even if repeal somehow grew in popularity, and for the very same reason their predecessors a century ago did: In general, only fools change rules that, by definition, made them winners.

#The link provided above only provides NCSL summary data for state legislative party control going back to the mid-1980s, but I happened to have a more complete data set with the totals going back to 1968. (Please don’t ask why; as Ron Burgundy might say, “it’s boring, but it’s my life.”)