How can Democrats expect to get 60 votes for their health care bill in the Senate when it barely garnered a majority in the House? It’s a good question that has a number of good answers. For instance: the Senate’s bill is more moderate than the House’s. And the 60-vote threshold applies only to procedural matters and not to final passage, meaning that Democrats could hedge their bets by voting for cloture but against the bill itself.

But perhaps the most fundamental difference is this one: only a third of the Senate is up for re-election each cycle. Not only that, but the Democratic senators who are up for re-election happen to come from mostly liberal states. Take a look at the following chart: 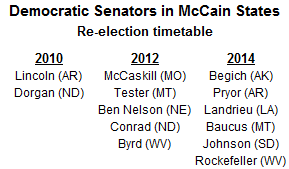 These are the 13 Democratic senators who represent states that John McCain won last November. Of the 13, only two — Blanche Lincoln of Arkansas and Byron Dorgan of North Dakota — are up for re-election in 2010.

Dorgan remains quite popular and does not yet have a credible Republican opponent. Governor John Hoeven has threatened to enter, but with Dorgan already having accumulated almost $4 million in cash and time running short, Hoeven’s curiosity is looking mostly like a bluff. Even if he did face a re-election threat, moreover, my guess is that Dorgan would not cause a serious problem for the Democrats on health care, as he’s something of a policy wonk, and chairman of the Democratic Policy Committee, a possible stepping-stone to a majority leader or majority whip position.

Lincoln, on the other hand, appears to be in real trouble, and the health care bill, which is opposed 2-1 in her state according to Public Policy Polling, undoubtedly isn’t helping matters much. Now, you can certainly construct a case that it’s in Lincoln’s best interest to vote for the health care bill anyway: the feeding frenzy that will ensure if Democrats fail to enact health care reform will have consequences for incumbents everywhere, and a procedural vote against health care would rob Lincoln of much of her fundraising and institutional support. But clearly, it’s not an easy decision for her.

There are other Democrats, like Ben Nelson of Nebraska and Mary Landrieu of Louisiana, who are also tenuous votes on health care, but none of them face the same near-term electoral pressures. Health care reform, it’s clear, has become relatively unpopular in the near term, but it would be speculative at best to guess at what impact it might have in 2012 or 2014, by which point the economy will probably have recovered, the provisions of the bill itself would be coming online, the tea party zeitgeist may have faded, and their could be a different President in the White House. Nelson and Landrieu, therefore, aren’t taking the same tangible risks to behave as team players.

As for Lincoln, she’s arguably the vote that Democrats have the most to worry about (perhaps along with Joe Lieberman, whose motivations for opposing the health care bill are irrational). But since Lincoln and only Lincoln is under substantial electoral pressure for 2010, the Democrats still ought to have pretty good odds of wrangling her in. Imagine, on the other hand, if in addition to Lincoln, two or three other red-state Democrats (say Nelson, Lincoln, and Mark Begich of Alaska) were also up for re-election. Under those circumstances, opposition to the health care bill would probably have calcified into a critical mass, and the measure would either be dead on arrival or headed back to the drawing board.