A series of recent polls have shown both Republicans and Democrats becoming more enthusiastic about the 2010 midterms as the result of the passage of health care legislation. According to USA Today, for instance, 69 percent of Republicans but 57 percent of Democrats are now more enthusiastic than usual about voting in the midterm. Both numbers are up significantly from February.

Set aside the Republicans’ impressive figure for a moment. The Democrats’ enthusiasm total is actually a record. On the 13 previous occasions that Gallup asked this question in advance of a midterm, neither party registered a score higher than 56 points. The Democrats just checked in at 57. Very probably, some of this is a temporary bounce and will fade as memories of the health care legislation become more distant. Nevertheless, at least for the time being, Democrats are as enthusiastic as they’ve ever been in advance of any recent midterm. 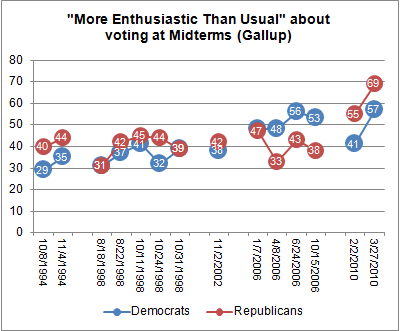 Their big problem, of course, is that Republicans are even more enthusiastic: 69 percent of them say they’re more geeked than usual about the election. If the Democrats’ total was record-breaking, Republicans just blew the competition away in Usain Bolt type fashion.

This is noteworthy for at least two reasons. One is in terms of the narrative: it is probably incorrect to imply — at least post-health care passage — that the Democrats are having issues with their base. They don’t have a base problem: they have a Republican problem.

Not that this should be much comfort to the Democrats. The data, for the time being, tells a pretty consistent story: the Democrats are in deep trouble. This stuff matters only at the margins. And “almost as bad as 1994, but not quite!” is not exactly a rosy scenario for them.

Nevertheless, it may also have some implications in terms of the likely voter models that the pollsters use. The higher the overall turnout, the less dramatic the gap should generally be between likely voter polls and registered voter polls. Democrats — and this ought to be scary for them — are already in a precarious position for the midterms and Republicans will probably improve their numbers further once pollsters testing the generic ballot switch over to likely voter models. At the same time, if the post-health care enthusiasm bounce holds, I’d be a little suspicious about anyone who is super aggressive about applying a likely voter screen or who models their turnout based on a broad sample of past midterms. The 2004, 2006 and 2008 elections were high-turnout affairs, and there is some evidence that this one is liable to be as well.

What I wish the pollsters would do, actually, is to publish the percentage of people in each party who are screened out by their likely voter model. You don’t have to tell us how you’re doing it — but at least let us know in broad strokes how much impact it’s having. How much of Rasmussen Reports’ apparent house effect, for instance, is because they’re applying a likely voter screen when most other pollsters aren’t, and how much of it is because there are some differences — or bugs — in other parts of their data collection and massaging routine? We shouldn’t have to guess; this should be an easy thing for the pollsters to disclose.