Democrats are banking on their incumbents’ fundraising prowess to help hold the majority in the Senate this fall. Sens. Kay Hagan in North Carolina and Mark Begich in Alaska, for example, lead their opponents in fundraising and are no doubt hoping that advantage will help them squeak out wins in competitive races.

But if history is any guide, raising the most money can be a poor indicator of re-election success.

Simply put, challengers don’t need to raise and spend as much money as incumbents; they just need enough cash to be viable. Since 2002, just 18 percent (three of 17) successful Senate challengers have outspent the incumbents they defeated. Going back even further to 1994, slightly less than a third of challengers (nine of 28) outspent losing incumbents.

How much money does a challenger need to raise? The 17 successful Senate challengers over the last dozen years raised and spent 79 percent, on average, of the money spent by the incumbent senators they defeated.

If we look at races since 1994, the threshold is higher: Successful challengers spent 95 percent of what incumbents spent. But that number is skewed by a few candidates — including Democrats Mark Dayton of Minnesota and Maria Cantwell of Washington in 2000 and Republican Peter Fitzgerald of Illinois in 1998 — who poured a ton of their own money into their campaigns, spending at least $5 million more than the incumbents. 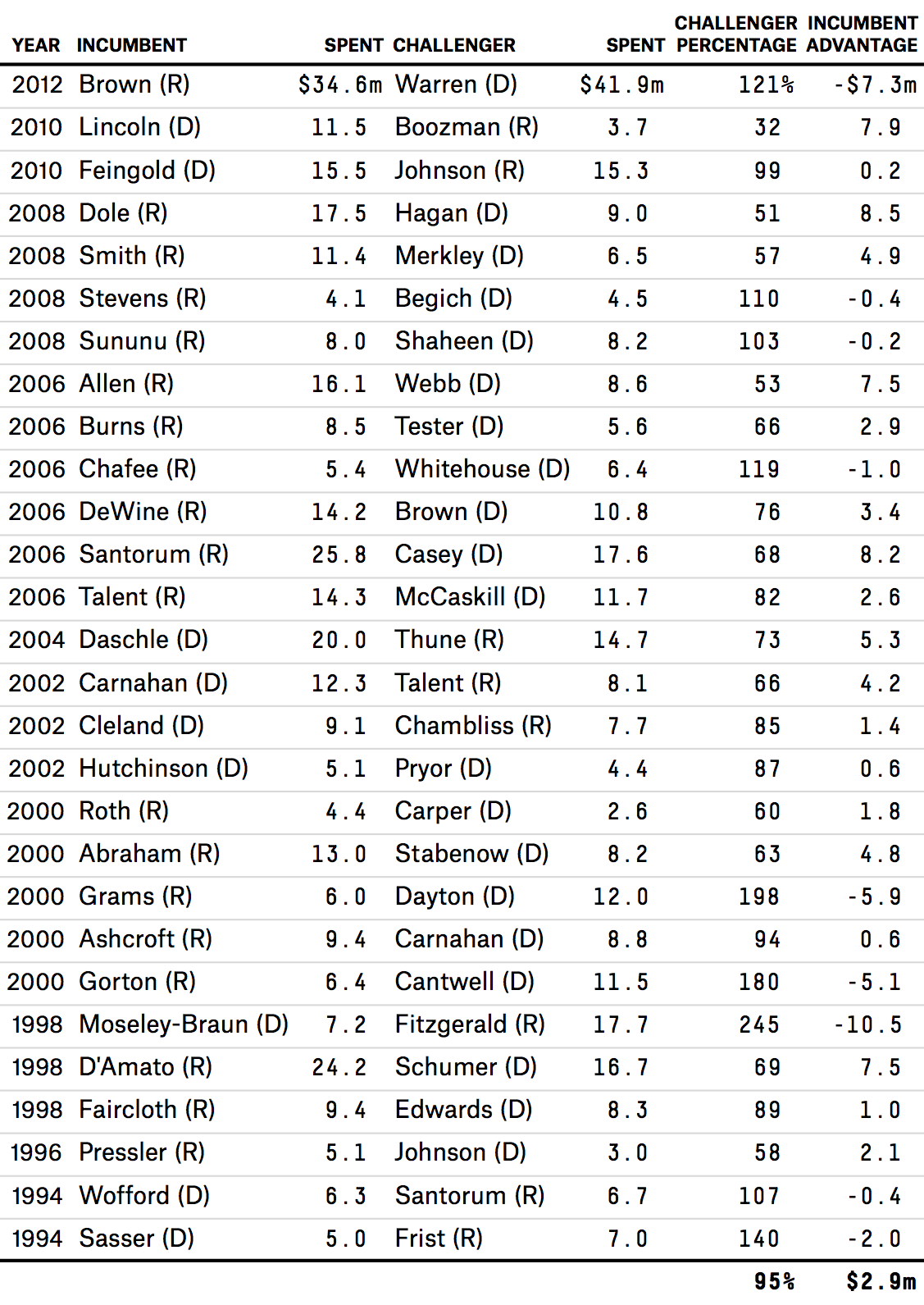 The 79 percent threshold isn’t a magic number; challengers have crossed it and lost. In 2008, for example, Democratic Rep. Tom Allen spent 83 percent as much as Republican Sen. Susan Collins and still lost the race in Maine. Others have spent far less and won. In 2010, Arkansas Rep. John Boozman raised and spent less than one-third of what Sen. Blanche Lincoln spent and still came out on top. But a certain level of financial backing allows a challenger to compete.

So how do this year’s challengers stack up? 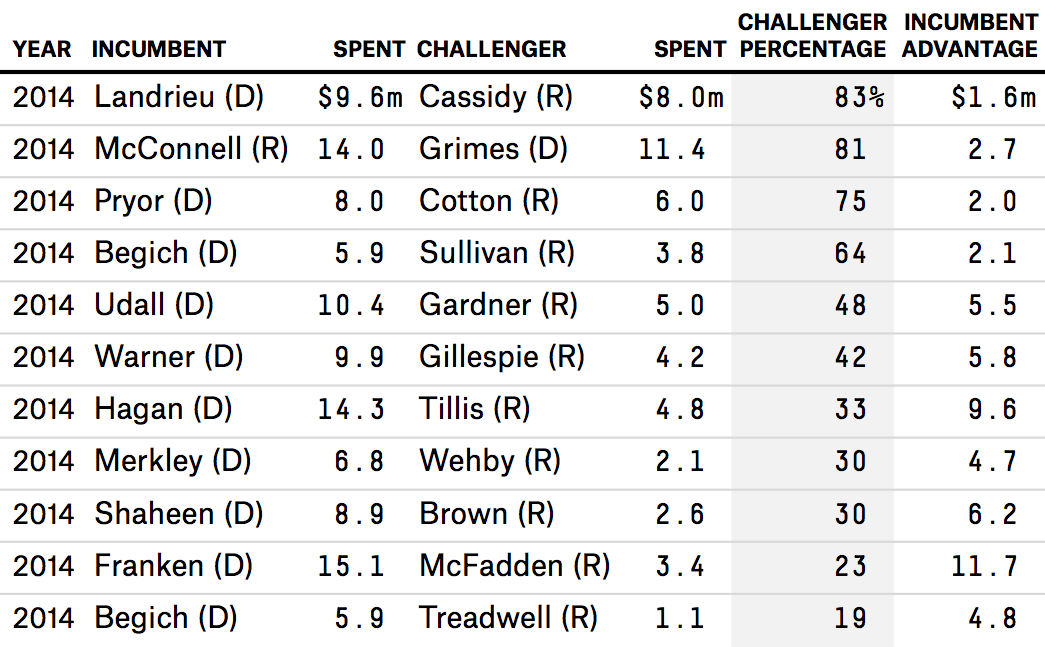 But that doesn’t mean the other Democratic senators should relax. For one, some GOP challengers could see an uptick in their fundraising. In Arkansas, GOP Rep. Tom Cotton raised 75 percent as much as Democratic Sen. Mark Pryor through the end of June.

In Alaska, former Commissioner of Natural Resources Dan Sullivan raised 64 percent as much as Begich through the second quarter. But Sullivan is still in the middle of a GOP primary. If he wins that race next Tuesday, his fundraising should increase dramatically.

In Colorado, Republican challenger Cory Gardner raised a little less than half of what Democratic Sen. Mark Udall brought in through June, but only entered the race in February. Gardner’s fundraising should improve over the next few months and the cycle could carry him across the line in a competitive state.

In North Carolina, Hagan dominated state House Speaker Thom Tillis, a Republican, in fundraising through June. Tillis raised a third of what Hagan did through June 30. But Hagan has been on the other side of the fundraising equation. In 2008, she raised and spent about half of what GOP Sen. Elizabeth Dole raised and won.

Sometimes incumbents have problems that money can’t fix, whether it be personal unpopularity or a national electoral environment that’s working against them. In 2006, then-Sen. Rick Santorum, Republican of Pennsylvania, spent $25 million, outspending Democrat Bob Casey Jr. two to one. But it was a Democratic wave year, and Santorum still lost re-election. In 2008, Virginia Republican Sen. George Allen outspent Democrat Jim Webb by $8 million but lost after he called one of Webb’s campaigners a racial slur.