The Midwest is the swing region of the country. That’s true in presidential elections, for sure, especially in what I call the “Great Eight” states; in fact, every winning presidential candidate since 1920–an amazing 23 consecutive cycles–has carried at least four of the eight Midwest states that border the Great Lakes and/or Mississippi River (Illinois, Indiana, Iowa, Michigan, Minnesota, Missouri, Ohio, and Wisconsin). Wisconsin was the closest overall state in the two Bush presidential victories (third closest overall in 2000, first in 2004), but Obama won there comfortably. He also posted solid wins in states, like Minnesota and Iowa, once thought to be trending toward the GOP. Midwestern congressional gains significantly contributed to the Democrats’ recapture the U.S. House and Senate in 2006, and their expansion of those majorities last year. You may also have noticed that the current White House occupant hails from the region’s largest city.

Continuing this series of posts on state legislative party control–the first post of which is here–we see yet again how pivotal the Midwest is. Looking at the data graciously provided by Tim Storey of the National Conference of State Legislatures at four cut points,* it’s clear that the Midwest has been consistently one of the two most competitive regions since the early 1980s. This is true in both the lower houses (state assemblies) and upper chambers (state senates). The only region more competitive across the time period of study is the Far West where, remarkably, the two parties have hovered within a very narrow range of between 40 percent and 50 percent Democratic share of all seats for four decades now. (More about the Far West in a later post.) 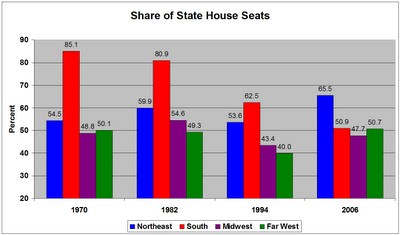 Turning back to the Midwest, what’s most interesting is how little overall progress Democrats have made relative to their improved performance of late in national elections–and yet, because many of these states were so knife’s-edge competitive this decade, the Democrats have flipped more state chambers from Republican control in the Midwest than anywhere else.

And yet, while the Dems’ Midwestern shares of the lower and upper chambers have of course improved since 1994–as is true for Democrats in every region of the country but the South–the levels aren’t much better in the Midwest than they were a quarter century ago, at the dawn of the Reagan era. The major strides made by the Democrats in the Northeast parallel the party’s gains at the congressional level; until the crazy political maneuvering in the New York Senate raised it two, the Republicans controlled just one of 24 chambers in the 12 Northeastern states (the Pennsylvania Senate).

By contrast, Democratic progress in the Midwest is steady, but slower. Overall, in the 11 bicameral, partisan Midwest states (Nebraska is unicameral, non-partisan), the Republicans control 10 of the 22 chambers. Granted, six of those 10 result from control of both houses of the state legislatures in Kansas and the two Dakotas–tough sledding states for Democrats. But there are Democratic opportunities in Indiana, Michigan and Missouri–all states Obama won and states that, perhaps with some strategic gerrymandering, could present a different playing field starting in 2012. 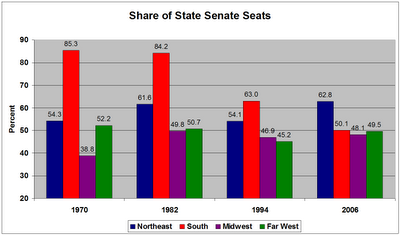 Again, there have been some notable legislative chambers flipped by Democrats in the Midwest in recent cycles. The regional story is more one of success than failure for the Democrats, to be sure. But to build a national majority, the party that happens to boast a president from America’s most competitive region needs to push up further its numbers in that region. As for the GOP, Republicans have began to talk of late about recovering in the Northeast. But if there is a Republican recovery in the offing in 2010 and beyond, I’m betting it will come in the Midwest, where the GOP can most persuasively make a claim to a resurgence if it reverses the partisan trend there and thwarts the Democrats’ bid to make that region look more like Northeast.

*Notes: I organized the states into four regions as follows: Northeast, 12 states running from Maine to West Virginia and Maryland; South, 11 former Confederate states plus Kentucky and Oklahoma; Midwest, the “Great Eight” listed above, plus the Dakotas and Kansas (Nebraska has a unicameral, non-partisan legislature and is not included in the analyses); Far West, the 8 so-called Interior West states, 3 Pacific Coast states, plus Alaska and Hawai’i. I chose the four cut points I did because 1970 was the earliest year for which data was available and it made sense to take counts following non-presidential cycles, when the majority of state legislators are selected; since 2006 was the last such year available, four cuts at 12-year increments from 1970 to 2006 worked out well–a choice that also has the fortuitous benefit of including results from the 1994 “Republican Revolution” cycle.