We continue our Presidential Geography series, a one-by-one examination of the peculiarities that drive the politics in all 50 states and the District of Columbia. Here, a look at Delaware, the First State. FiveThirtyEight spoke with Dr. Joseph A. Pika, a professor in the Department of Political Science and International Relations at the University of Delaware.

Senator John James Ingalls, who represented Kansas from 1873 to 1891, is said to have described Delaware as a “state that has three counties when the tide is out and two when it is in.” 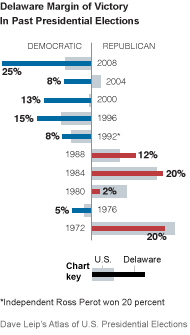 Mr. Ingalls’s point, that Delaware is very small, is as true today as it was then. At just under 1,950 square-miles, Delaware is the second smallest state by land area. It is about 1/40th the size of Mr. Ingalls’s home state of Kansas, the 15th biggest state.

Despite its small stature, Delaware has undergone the same political realignments as larger states in the Northeast, and those changes are easier to see in a state which has just three, fairly distinct, counties (no matter what the tide is doing).

In the latter half of the 20th century, Delaware was a swing state, even a national bellwether in presidential elections. It voted for every winning candidate from 1952 through 1996. In the 1988 election, Delaware favored George Bush, a Republican, by 12 percentage points, more than his seven-point margin nationally. Now, however, Delaware is a solidly blue state. President Obama is a virtual lock to carry its three electoral votes.

In the 1990s — as the Republican brand became more defined by cultural issues like abortion and, more recently, same-sex marriage — Republican support began to erode in Delaware, where the middle of the road tends to be preferred. According to Gallup’s State of the States survey, 41 percent of respondents in Delaware described themselves as moderate, the highest rate in the nation. Many of these voters began to leave the Republican Party as it moved to the right. It is the same trend that made reliably Republican New Jersey a reliably Democratic state.

The exodus of moderate Northeastern Republicans from the party was one prong of a two-pronged realignment that essentially flipped Delaware’s partisan landscape, Mr. Pika said. 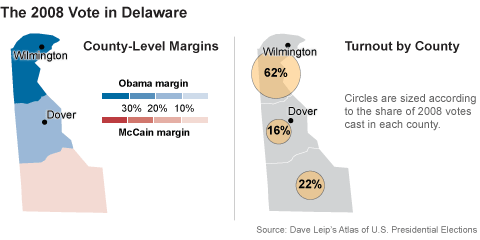 At the northern end of the state is Wilmington’s New Castle County, the most urbanized area in Delaware. About half of the companies in the Fortune 500 are incorporated in Delaware, where the legal framework is seen as corporate friendly. The Wilmington area is home to thousands of bankers, lawyers and other white-collar, business-focused voters who tend to hold moderate views on social issues. When they stopped voting Republican, New Castle County went from politically competitive to overwhelmingly Democratic territory.

Democrats in southern Delaware “were like those in South Carolina or Mississippi, ” Mr. Pika said, “They moved into the Republican Party in large numbers as the party became more connected with the Christian Right and social issues.”

The transformation has been complete. Sussex County is now Tea Party territory. It was ground zero for the 2010 Tea Party rebellion in Delaware, when conservative voters fueled Christine O’Donnell’s upset victory over the establishment-backed candidate, Representative Michael N. Castle, in the Republican primary for the Senate.

Almost all of Sussex County is rural. It is the top poultry producing county in the country. Along its coast, however, more than two decades of investment has cultivated a string of resorts, Mr. Pika said, and now liberal pockets can be found there. Rehoboth Beach, for example, has a substantial gay community.

Sandwiched between dark blue New Castle County and ruby red Sussex County is Kent County, the most politically competitive region of the state. Kent County is home to Dover Air Force Base, and many military families have settled in the area. Former President George W. Bush carried Kent County in 2000 and 2004. But New Castle’s suburbs have slowly been expanding south into Kent, Mr. Pika said, moving it closer to the ideological center. Mr. Obama won Kent by eight percentage points in 2008, although much of the Democratic improvement in Kent — and Delaware generally — can be attributed to the presence on the ticket of its native son, Vice President Joe Biden. 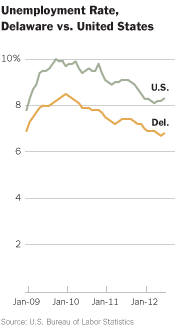 The Bellwether: There Is None

Delaware does not really have a county that tends to match the statewide two party vote shares. New Castle is more Democratic than the state as a whole. Kent County is moderately more Republican. Sussex is a lot more Republican.

Delaware might not have a bellwether county, but political buffs wanting to know what’s happening in the First State need only focus on New Castle County. With almost two-thirds of the vote, New Castle’s political preferences tend to overwhelm the wishes of Delaware’s other two counties. Republican presidential candidates carried both Kent and Sussex Counties in 1992, 2000 and 2004. Yet, they still didn’t come close to carrying the state.

That’s unlikely to change. The Democratic margin of victory in New Castle County has increased in every election since 1984, and Gallup ranked Delaware as the sixth most Democratic state by party affiliation. One in five Delawareans is black, the eighth-highest share in the nation.

On top of Delaware’s default Democratic lean is the home state increase
produced by Mr. Biden, who is still popular there, Mr. Pika said. It all virtually guarantees that Delaware will be one of the first states in Mr. Obama’s victory column this November. And not surprisingly, he is a 100 percent favorite in Delaware according to the current FiveThirtyEight forecast.