I had previously been defining a “Must-Win State” (see the Swing State Anaylsis graph along the right-hand side of the page) as a state which is won the highest percentage of the time by the candidate winning the election. The problem with this definition is that it was producing some skew toward Obama-friendly states, since we now have Obama winning the election the strong majority of the time period.

The new definition is that a Must-Win State is a state won the highest percentage of the time by the winning candidate when the election is close. By “close”, I mean an election in which the popular vote is within 4 percentage points. If the popular vote is outside that 4 percentage point range, it is pretty much mathematically impossible for the trailing candidate to win in the Electoral College, meaning that the electoral math becomes irrelevant. So these are the states that the candidate needs to win when winning individual states matters. 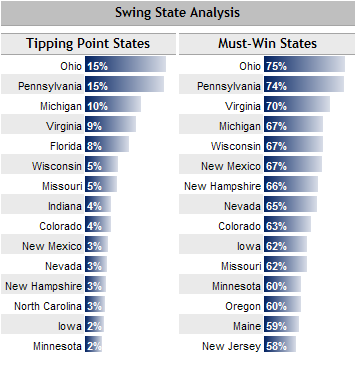