Richard Posner has a fascinating read:

My theme is the intellectual decline of conservatism, and it is notable that the policies of the new conservatism are powered largely by emotion and religion and have for the most part weak intellectual groundings. That the policies are weak in conception, have largely failed in execution, and are political flops is therefore unsurprising. The major blows to conservatism, culminating in the election and programs of Obama, have been fourfold: the failure of military force to achieve U.S. foreign policy objectives; the inanity of trying to substitute will for intellect, as in the denial of global warming, the use of religious criteria in the selection of public officials, the neglect of management and expertise in government; a continued preoccupation with abortion; and fiscal incontinence in the form of massive budget deficits, the Medicare drug plan, excessive foreign borrowing, and asset-price inflation.

By the fall of 2008, the face of the Republican Party had become Sarah Palin and Joe the Plumber. Conservative intellectuals had no party.

Now, take a look at this chart; this is the share of the vote of those with post-graduate educations won by Democrats: 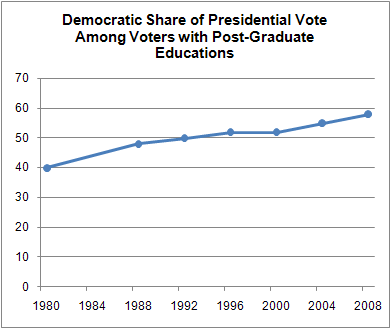 The 1980 figure is extrapolated based on Jimmy Carter’s performance among all college graduates. Carter won only 35 percent of college graduates in 1980, but Democrats have generally performed better among those with postgraduate educations than those with “just” a college degree; we estimate Carter’s share of the postgraduate vote was 40 percent. Other figures are taken from New York Times exit polling.

Obviously, this data is far from perfect: Having attended the University of Chicago, where there are plenty of booksmart people that you wouldn’t consider particularly bright, I can tell you that the correlation between intelligence and educational attainment is considerably less than one-to-one. Still, Republicans have gradually been losing the egghead vote. I wonder how that translates into their ability to recruit strategists and “thought-leaders” who can work on the campaign, policy and media sides and help to lead them out of their current slump.