Friday’s Dear Mona column looked at the question of religiosity in the United States: The percentage of Americans regularly attending church hasn’t drastically changed much over the past 30 years. By contrast, the percentage of Americans describing themselves as atheist, agnostic or “nothing in particular” has steadily risen over the past five years.

A closer look at the survey data (which comes from the Pew Research Center) showed that the unaffiliated aren’t necessarily the irreligious: 41 percent of them pray regularly, and 18 percent think of themselves as religious people. This made me wonder whether Americans who attend religious services might be practicing their faith differently, too.

The National Congregations Study, conducted by Duke University in 1998 and 2007 (it plans to release new findings later this summer), surveys “a representative sample of America’s churches, synagogues, mosques and other local places of worship.” Its most recent study found that 45.1 percent of congregations had book discussion groups — up from 29 percent in 1998. Over that period, groups for lobbying, voter registration and English as a second language had also increased.

The survey also asked questions about how those congregations worship. There, the changes since 1998 were large enough to form the basis of the researchers’ main conclusion: “Worship services are becoming more informal.” 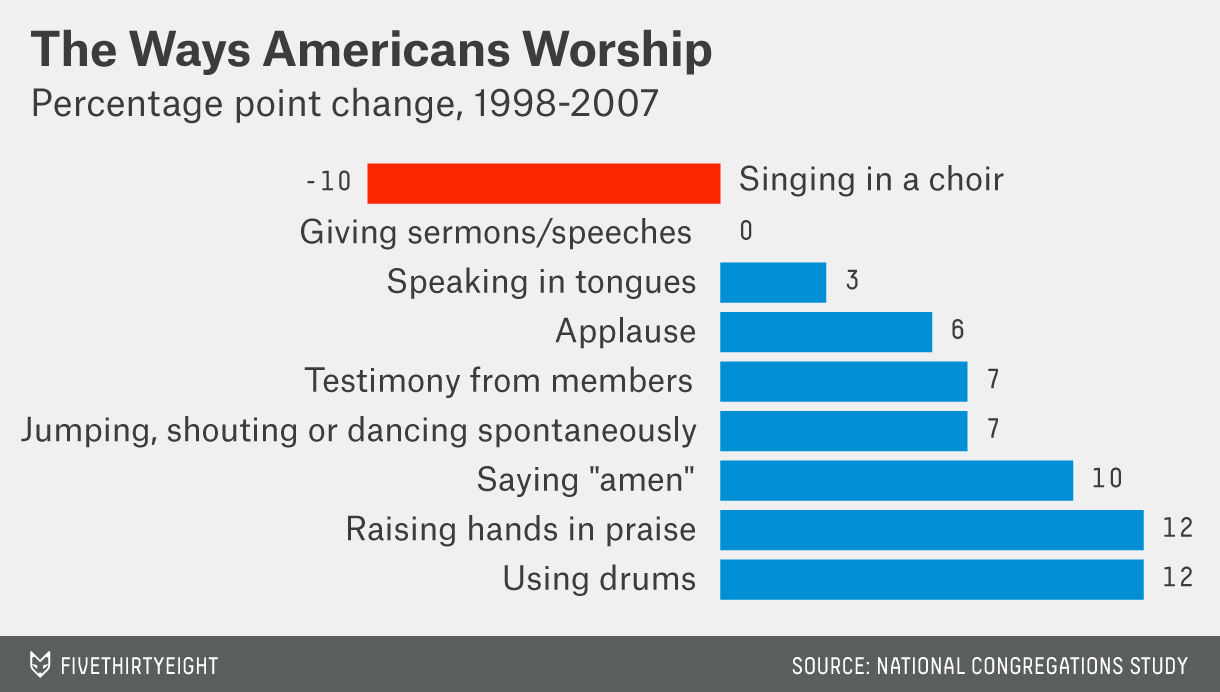 Although it has increased by only 3 percentage points, glossolalia — more commonly known as speaking in tongues — occurred in 27 percent of congregations in the past year. Sermons or speeches are just as prevalent as they used to be (used at 95 percent of congregations), but other traditional methods of praise have seen their numbers drop; for example, singing in a choir has fallen from 54 to 44 percent of congregations. The researchers said they hope these findings “will help readers place their own experiences in a larger perspective.” As a data journalist, I say amen to that.