Dear Mona,
How common is it for adults to take ADHD drugs like Ritalin, Adderall, Concerta, etc., and do we know anything about who those adults are? Is this trend on the rise, or am I just noticing it due to proximity?
Thanks,
Will, 25, NYC

You’ve mentioned several drugs, so you’re clearly aware that there are different medications available to treat attention deficit hyperactivity disorder (ADHD, a condition whose symptoms include inattentiveness, hyperactivity and impulsiveness). But you should keep in mind that any given drug can be used for different medical conditions — for example, the ones you mentioned are also used to treat narcolepsy (a sleep disorder).

Ritalin and Concerta are two brand names with the same active pharmaceutical ingredient: methylphenidate. About 4 percent of adults say they have used methylphenidate. (We’ll get to Adderall later; it’s a separate drug and accounts for a third of the ADHD drug market.)

That 4 percent estimate is based on interviews of 37,869 adults conducted across the United States by the National Survey on Drug Use and Health in 2012. The survey also tells us a lot more about those individuals.

You asked whether you were noticing a trend simply because you’re close to it. Given your age, you may be on to something. Two-thirds of the adults in the survey who said they have taken methylphenidate were between 18 and 25 years old. To make sure that wasn’t just because the survey had more respondents in that age group, I also looked at the breakdown of the 96 percent who said they haven’t taken ADHD drugs. Their age distribution looked very different. 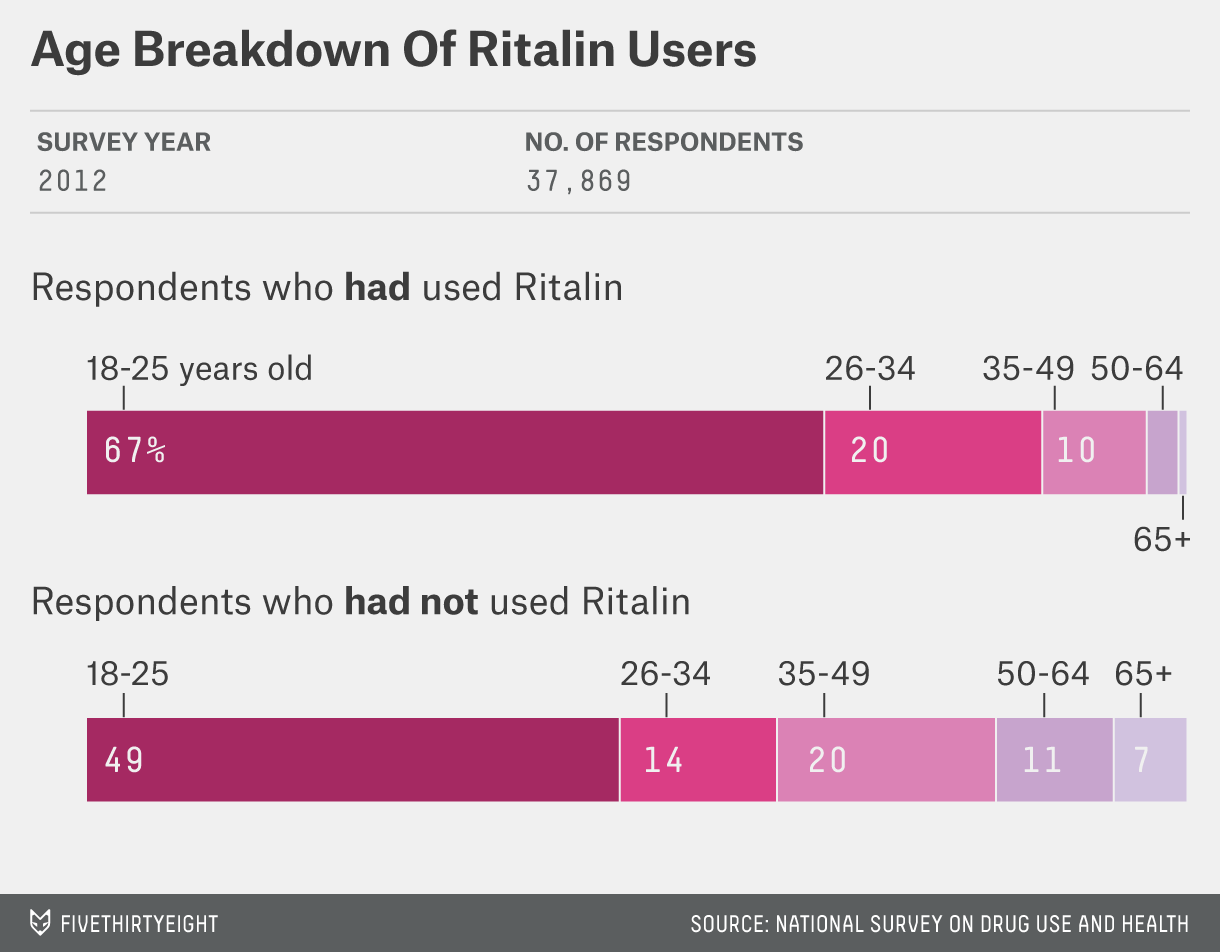 In a way, there’s nothing surprising here. Some of the older survey respondents wouldn’t have had the same access to the medication. Although methylphenidate has been around since the 1950s, it wasn’t until the 1990s that its manufacture began its rapid rise. The older respondents also would have been less likely to get an ADHD diagnosis. Between 2003 and 2011, the percentage of U.S. children whose parents said a health care provider had diagnosed them with ADHD rose 42 percent, according to a joint study by the Centers for Disease Control and Prevention, and the Health Resources and Services Administration.

Although the ages in the two groups differed considerably, on other measures respondents who had taken methylphenidate looked much like those who hadn’t. The gender split was almost the same for both groups. Employment status, income and even what kind of work they did were basically the same whether someone had or hadn’t taken drugs such as Ritalin or Concerta.

But remember, the numbers above show lifetime consumption of only methylphenidate, not the percentage of adults who are currently using all ADHD drugs. There’s other data that can help us look at those other drugs and answer your question about whether the overall trend is on the rise.

Express Scripts, the United States’ largest pharmacy-benefits management company, has a report on drug trends that can help fill in the blanks. Its 2013 edition found that while methylphenidate use is important, accounting for 23 percent of the ADHD drug market, it doesn’t capture the full picture. Drugs like Adderall (produced from a combination of amphetamine and dextroamphetamine) accounted for 38 percent of the market and Lisdexamfetamine (brand name Vyvanse) a further 16 percent.

In a separate report based on a sample of 15 million privately insured Americans, Express Scripts focused on people who had filled at least one prescription for an ADHD medication between 2008 and 2012. That left the anonymized pharmacy claims of more than 400,000 individuals to analyze.

Overall, the company found that between those years, the use of all ADHD medications among Americans ages 4 to 64 increased by 35.5 percent. The rise was highest among young adults: It calculates that 1.5 percent of adults 26 to 34 were taking ADHD medication in 2008. Five years later, that figure had almost doubled to 2.8 percent. 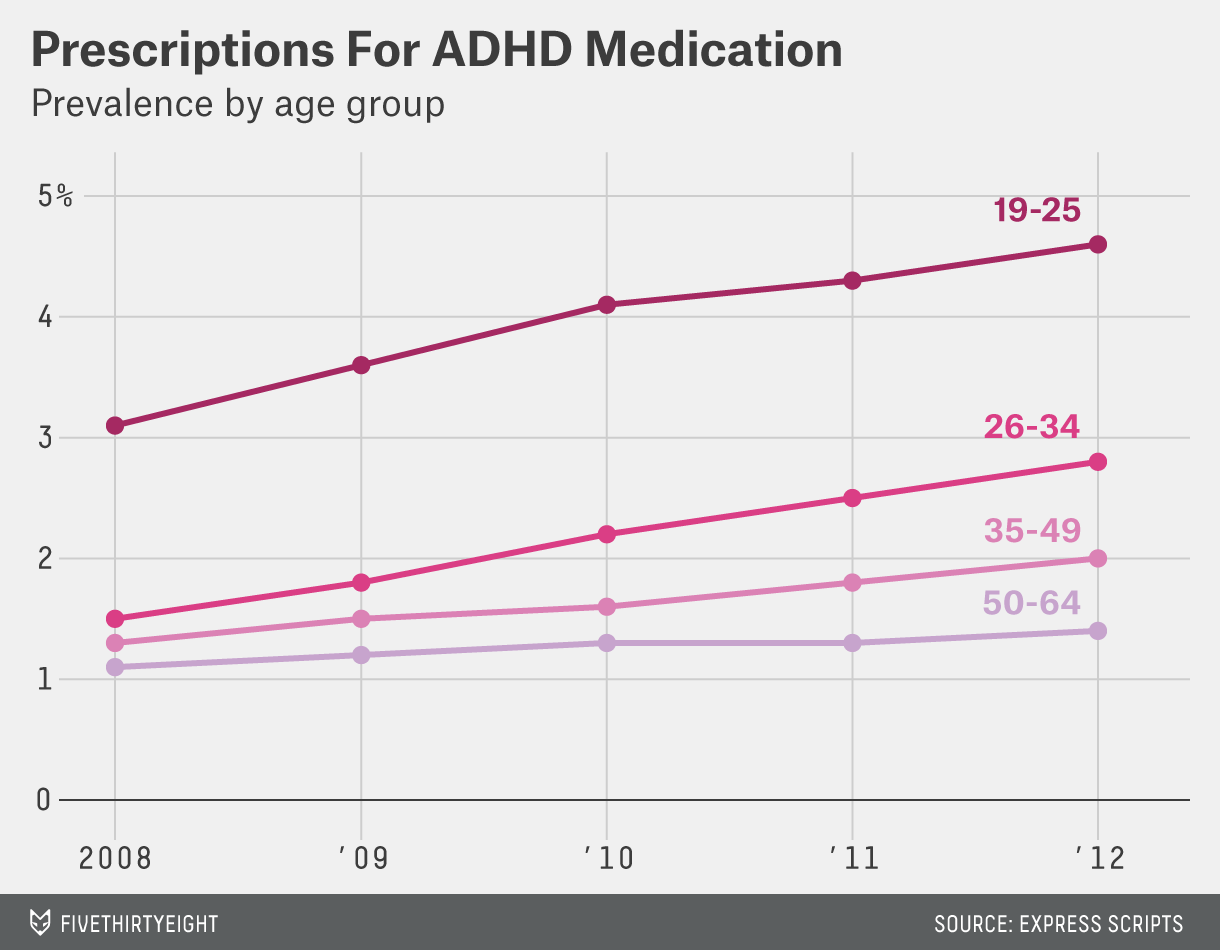 Another report, from the United Nation’s International Narcotics Control Board (INCB) in 2013 points to a similar trend. The INCB claims that global production of methylphenidate alone reached its highest level in 2012 — 63.2 tons. The United States was the biggest producer of the drug. It was the biggest single consumer, too — but once we account for the size of a country’s population, the U.S. is surpassed by Iceland, where there were 15 standardized daily doses per 1,000 inhabitants in 2012, compared with eight per 1,000 in the U.S.

Let’s be clear though. The only trend we’re talking about here is consumption — this data can’t tell us about diagnosis patterns or prevalence of the disorder, much less abuse of these drugs.

What we do know is that a growing fraction of American adults, particularly young ones, have taken ADHD medication. And the responses in that national survey suggest that adults who have consumed those drugs aren’t so different from those who haven’t.