On Friday, I responded to a question from a reader who wanted to know how many people had, like him, never had a drink of alcohol. After looking at trends within the U.S., I compared the percentage of lifetime abstainers in countries across the world using data from the World Health Organization (WHO).

People in Islamic countries conformed to assumptions (mine at least) about being the most likely to abstain from alcohol, but what about international trends in alcohol consumption?

Luckily, being a health organization, WHO isn’t just interested in who is and isn’t drinking — it wants to know what’s in their glasses and how much they’re knocking back. It has national data on average alcohol consumption per capita for those age 15 and over in each country.

The data also describes consumption by beverage type: wine, beer, spirits and “other.” To break consumption down by beverage, WHO again used government records as well as statistics from the alcohol industry and the United Nation’s Food and Agriculture Organization database.

WHO presents the data in liters of pure alcohol consumed in 2010. But to make the comparisons more comprehensible (after all, when was the last time you ordered a liter of pure alcohol?), I’ve taken average alcohol content and average serving size for each beverage and converted those numbers into standard serving sizes. The results show how many glasses of wine, cans of beer and shots of spirits were drunk per person in each country in 2010. Here are the countries that drink the most of each drink in per-capita terms (you can find the full results in the lengthy table at the bottom of this article): 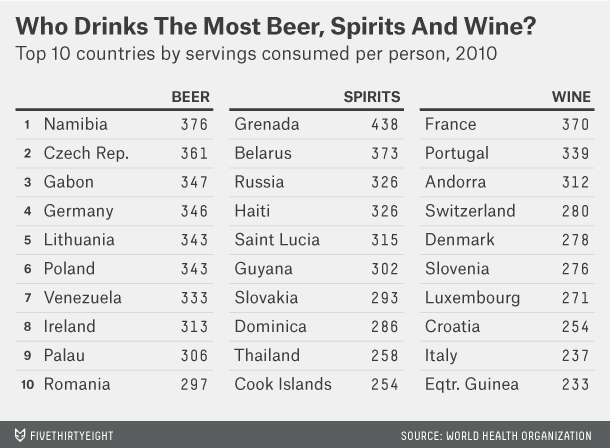 Some of that data conforms to stereotypes. The French consume more wine than people in any other country — 370 glasses of wine per person per year, compared to just 84 glasses in the U.S. Remember though, these are just drinking figures per capita — they don’t take all those abstainers into consideration. The wine consumption of the drinking population of France will be higher still.

Namibia is the world’s biggest beer-drinking country, with 376 12-ounce cans of beer consumed per person. In Germany, the average is 346 cans, and in the U.S. it’s 249 cans.

If you assume that 1.5 fluid ounces is a normal measure of hard liquor (that’s about a shot-glass worth), then the average person in Grenada drinks 438 measures of spirit per year. That’s far more than any other country — including Russia, where the average is 326 measures.

My colleague Ritchie King (while he was working at Quartz) used Euromonitor data to look in even more detail at which spirits are purchased in each country. Yes, before you ask, Russia does go for vodka and Mexicans choose tequila. According to those sales numbers, Americans’ favorite spirit is vodka, but that’s a relatively new phenomenon. One brand, Smirnoff Vodka, “took America by storm” in the late 1940s, “capitalizing on the popularity of America’s new ally just after WWII by marketing the Moscow Mule, made with vodka and Cock ‘N Bull ginger beer.”

But there’s an even more simple explanation for changing tastes in spirits: availability.

According to Bowling Green State University professor Scott Martin, who studies the use of drugs and alcohol in the U.S., grain was needed for food as opposed to distillation during WWII, and imported liquor such as Scotch was scarce. “Rum from the Caribbean, however, was more available, though not initially as popular,” he said in an email. “Bars had to push rum because it was all they could get, so they created new drinks, such as the Hurricane in New Orleans.”

Beyond spirits, we do have some idea about the popularity of alcohol in the U.S. The National Institute on Alcohol Abuse and Alcoholism has data going all the way back to 1850. Overall, it shows that after prohibition, alcohol consumption per person (age 15 and over before 1970, 14 and over thereafter) rose, peaking in the early 1980s at 2.76 gallons per year, then fell in the late 1990s before rising again to 2.26 gallons per year in 2010.

The data also demonstrates changing American tastes. In 2010, wine consumption was the highest it had been in any of the previous 160 years. Since the 19th century, beer has been a firm national favorite. Although spirits briefly caught up in the 1960s, beer is consumed more than any other alcoholic beverage. 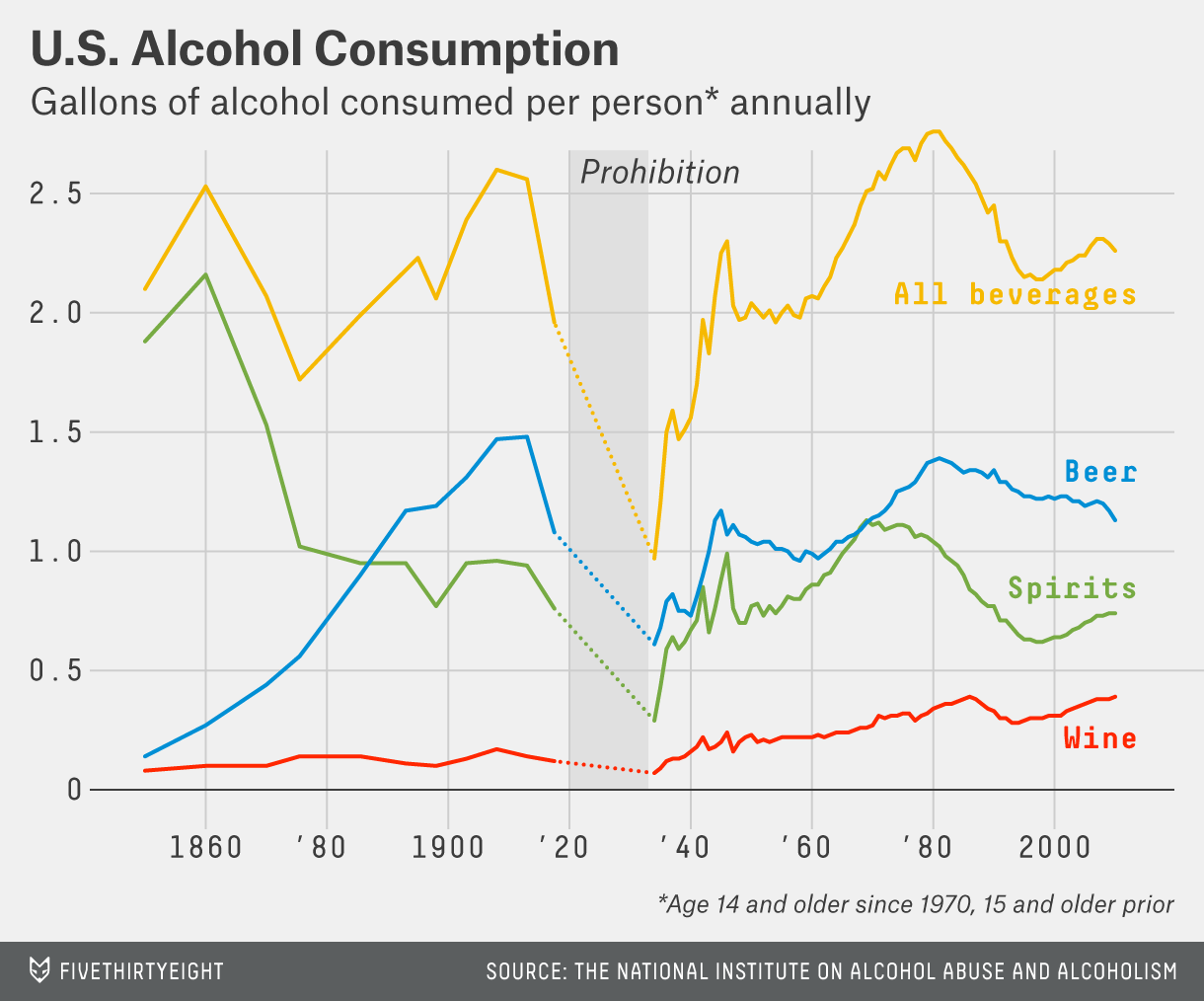 Those fluctuations are due to “factors like availability, price, government regulation, and technology,” Martin said. Take the example of beer before 1900. Martin explained that it “was less popular, or at least less consumed, before the 20th century because it was perishable. With technological innovations like refrigeration, bottling, cans, and so on, beer became easier to produce, transport and sell, both at bars and at home.”

These days, American purchasing choices aren’t so different from international ones. In 101 of the 193 countries WHO looked at, people drank more servings of beer than any other alcohol, followed by spirits (59 countries), then wine (20). The other 13 countries, most of which have predominately Muslim populations, recorded alcohol consumption as zero. (You can find the data behind this table on Github.)