This might seem strange coming from a site that focuses unabashedly on the horse race elements of the campaign. But George Stephanapolous has it wrong in his interview today with TPM’s Greg Sargent:

Asked to defend the fact that policy didn’t come up for the first 40 or so minutes of the debate, Stephanopoulos said:

“This is the core question for the campaigns, and a lot of Democratic voters right now. That’s why we decided to lead with it.”

It’s ABC’s right to run its debate as it chooses; as I indicted last night, I think Barack Obama’s preparation was lacking. However, if this was its rationale for running the debate as it did, it’s a poor one.

Edison-Mitofsky, in its exit polls throughout the primaries, has asked the following question on each survey:

So voters can pick between electability — “best chance to win in November” — and other core attributes like experience. How many voters picked electability? Not very many. 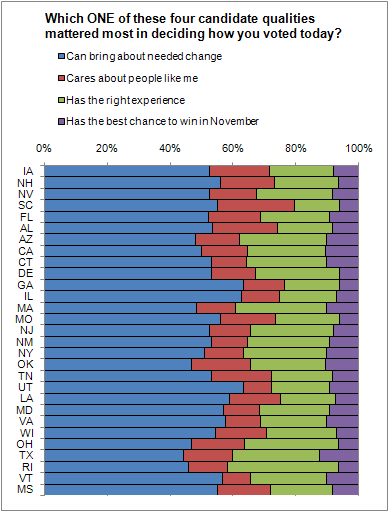 In the 29 states where Edison-Mitofsky asked this question, it finished dead last in 28 of them, and next-to-last in Vermont, where it beat “cares about people like me” by one point. Nor has electability become more of an issue for the voters as the primary season has worn on. In the states that voted in January, an average of 7.4% of voters chose electability. On Super Tuesday, 8.5% did. In the “rest of February” states like Virginia and Wisconsin, 8.3% chose electability. And it was the choice of 8.4% of the voters in states that voted in March.

Voters don’t vote on electability because doing so means that you’re essentially vetoing your own candidate preference. Essentially, you’re saying:

This simply isn’t how most people behave. They get to cast one ballot for their party’s nomination for the Presidency every four years, and they aren’t about to let it be dictated based on their guesses about how other people will behave. Arguably, this is a collective action problem. Although, under certain circumstances, voting on electability could become a self-fulfilling prophecy that could actually subvert the popular will.