Some of the world’s most important historical, cultural and natural sites were already battered by war and disasters before things recently got worse.

Last year, 46 of 1,007 places designated as World Heritage sites by UNESCO were in danger, a nearly unprecedented level of risk, just behind the all-time high set in 2003. Then on Saturday, an earthquake in Nepal leveled several of the monuments in the Kathmandu Valley that together are a World Heritage site. These monuments include urban squares and important Buddhist and Hindu sites. The quake also damaged Sagarmatha National Park, a section of the Himalayas that includes Mount Everest.

“I am deeply aggrieved by the magnitude of human loss caused by the earthquake in Nepal,” Irina Bokova, director-general of UNESCO, said in a statement. “I am also shocked by its devastating impact on the unique cultural heritage in the country.” Bokova told The New York Times that she was unaware of any modern natural disaster that had damaged so much of the world’s cultural heritage.

Bokova has had to issue lots of statements lately reacting to threats to that heritage. Last month, responding to reports that Islamic State had deliberately destroyed Hatra, capital of the first Arab kingdom, Bokova said in a statement that the attack in Iraq “confirms the role of destruction of heritage in the propaganda of extremists.” Earlier this year, Islamic State destroyed Nimrud, a city originating in 13th century B.C. Nimrud wasn’t yet on the World Heritage list, but Bokova said that its deliberate destruction constituted a “war crime.”

The 46 sites worldwide that UNESCO classifies as in danger don’t yet include the Kathmandu Valley or Hatra. Adding sites to the danger list is something that only the World Heritage Committee can do, Roni Amelan, English editor of UNESCO’s press service, said in an email, and the committee is not scheduled to meet again until June. In the meantime, UNESCO plans to send a mission to Nepal in the coming weeks, to supplement work by UNESCO’s Kathmandu office.

UNESCO already has a lot of work to do conserving World Heritage sites. The 46 endangered sites are an all-time high for the organization, which is observing its 70th anniversary this year and has been tracking heritage sites since 1978. 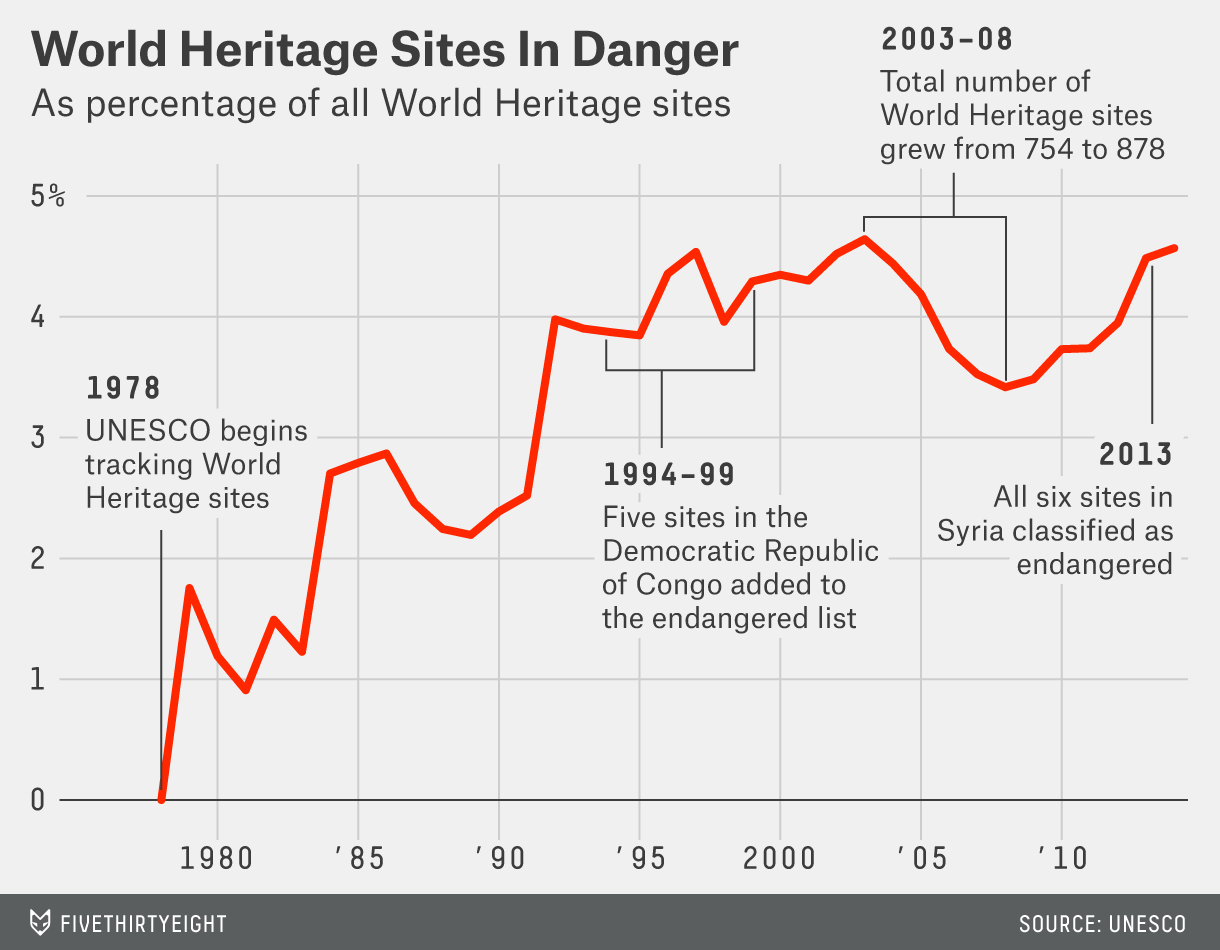 Sites that have suffered major damage are almost always placed on the danger list rather than removed entirely, a drastic decision that has applied to only two sites in the list’s history. Sometimes places are added to the list even after major damage: The site of the Taliban’s demolition of two Buddha statues in Afghanistan in 2001 was added to the list in 2003, as “testimony to the tragic destruction.”

With such a wide range of sites on the list, it’s not unusual for threats as different as earthquakes and religious extremism to coincide. The current list of 46 endangered sites includes Everglades National Park (partly because of reduction of water flow) and Liverpool’s docklands (because of a building development). Edinburgh could join Kathmandu and Hatra on the list of sites to be discussed in June, after a UNESCO adviser attended a meeting in February discussing developers’ plans to redesign a historic hotel.

The wide range of sites, geographically and by type, means that what can look like a worldwide crisis could also be a coincidence. In 2003, when the percentage of sites that were endangered peaked, five new sites were listed as endangered in five different countries: Afghanistan, Azerbaijan, Iraq, Ivory Coast and Nepal. The threats included civil unrest, war, earthquake and development. “There is no link whatsoever between those five sites, yet they were all inscribed the same year,” Richard Veillon, of the Policy and Statutory Meetings unit of UNESCO’s World Heritage Centre, said in an email statement sent through a UNESCO spokeswoman. “So there is no explanation to this peak [of percentage of sites in danger in 2003] other than just circumstances on the ground.”

On the other hand, the current peak does reflect, in large part, one major cause. UNESCO added all six sites in Syria to its endangered list in 2013 because of threats from antiquities smuggling, which is booming during the country’s ongoing civil war. The Syrian sites represent nearly half the endangered sites in Arab states and explain why that region has one of the highest proportions of sites that are endangered in the world.