There are no state polls out today, but the daily Gallup and Rasmussen trackers show an apparently split decision on Barack Obama and the controversy surrounding his “bitter” comments. Gallup shows no deterioration in Obama’s numbers at all. He currently holds a 50-to-41 lead over Hillary Clinton in the Democratic primary race, essentially the same as the 51-to-42 lead he held before the controversy broke. He also leads John McCain by three points, 46-43, in Gallup’s general election tracker, which is also unchanged since Friday.

Rasmussen, meanwhile, shows Hillary Clinton with a 1-point lead over Obama, the first lead she’s held since March 27. However, there are a number of cautious and caveats: (i) Obama’s lead had already fallen to 3 points (47-44) in Friday’s Rasmussen, before the controversy began; (ii) Obama has generally done slightly worse in Rasmussen polls released over the weekend than those conducted mid-week; (iii) Rasmussen has already begun polling this issue in more detail, and suggests that any trouble will likely be felt among independent and Republican voters, rather than among Democrats:

Rasmussen Reports is surveying voters this weekend for reaction to Obama’s remarks. Preliminary indications from interviews with 400 Likely Voters suggest that the comments are troublesome for Republicans and unaffiliated voters. However, there is less of an impact among Democrats. That tends to confirm the growing consensus that the comments may have more impact on the General Election than the Primaries.

The preliminary data also suggests that Obama was shrewd to try and focus attention on the portion of the comments about people being bitter. That part of the message is well received. The reference to guns, religion, and immigration that creates potential problems.

Indeed, Rasmussen’s general election tracker shows a potentially more worrisome trend for Barack Obama, with his now trailing John McCain by 8 points, up from a 4-point margin just a day ago. The thing is, however, that Clinton’s numbers have also taken a hit; she also now trails McCain by 8 points. The Democrats have quite often moved in tandem in Rasmussen’s national trial heat tracker: 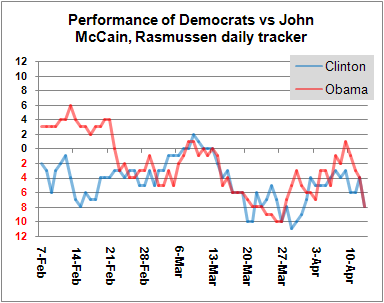 There are a couple of things going on here. Firstly, Obama clearly did seem to be riding a bubble of momentum throughout the middle portion of February, which was right at the time when he was piling up primary and caucus victories virtually every weekend. This was perhaps to be expected; rarely during the course of the campaign has a candidate been able to sort of organically generate favorable media coverage for himself on such a sustained basis.

Since then, however, the two Democrats’ numbers have essentially moved in concert with one another. Both Democrats saw a hit to their numbers in the wake of the Jeremiah Wright controversy, and both Democrats appear to be taking a hit now. We should caution that, depending on Rasmussen’s methodology, we should probably expect to see some serial correlation in the Democrats’ numbers: if Rasmussen dials a Democrat on any given evening, she is most likely to say she supports both Barack Obama and Hillary Clinton over John McCain, and if Rasmussen dials a Republican, she is most likely to support John McCain over each of the Dems. Nevertheless, there may also be a sense of “there they go again” whenever the Democrats start bickering with one another and the press coverage turns negative.

Indeed, if I may editorialize for a moment, I find the media’s handling over “Bittergate” to be a little bit pathetic. Jeremiah Wright’s comments were manifestly controversial — and manifestly wrong to the large majority of Americans. At the very least, they were something that Obama needed to find a way to spin his way out of (or spin his way away from, since the comments were not his). These remarks are much more ambiguous on their surface, with Obama expressing sentiments that a substantial portion of the electorate probably agrees with, especially when the comments are taken in their original context. They are more something that various interested parties — the Clinton campaign, the media, and to a lesser extent the McCain campaign — have tried to use to spin their way into a controversy.

My general prediction is that the comments are fairly close to a non-story in terms of their effect on the Democratic primaries: I would expect to see a very short term impact of not more than 1-3 points on Obama’s numbers against Clinton — and virtually no medium-term impact, or perhaps even a slight backlash against Hillary Clinton. The general election numbers I would tend to follow more carefully: perhaps we’ll see a modest (1-3 points) medium-term impact there, but probably not any substantial long-term impact. And I think the medium-term impact might be as great on Hillary Clinton’s numbers as they are on Barack Obama’s.

UPDATE: To back up what I mean by that last claim, see the reaction from The Nation here on Clinton playing the elitism card, and by The New Republic here on Clinton playing the guns card. I don’t know whether it would be electorally wise for the Obama campaign to go in this direction, but if they decided to release a memo tomorrow that portrayed Hillary as elitist and out of touch, that memo would somewhat write itself (“$109 million”, “NAFTA”).

UPDATE #2: Speaking of said memo, Halperin says that the Obama campaign has just released one.