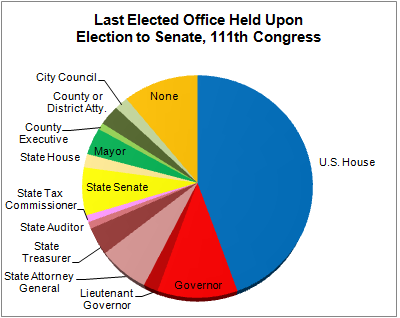 Why should you care about this? Maybe you shouldn’t. But when we’re trying to figure out just whom the candidates might be in a case like, say, Missouri, it’s helpful to have some notion of how senators get to be where they are. Are we right to focus heavily on members of the Congress? (Yes — this is where an awful lot of Senators come from.) How common is it for someone to be elected to the Senate after having held no previous elected office? (Not very common — but more common than you might think).

Nearly half of the current members of the Senate were members of the U.S. House at some before becoming senators — usually immediately beforehand. A lot of these folks, moreover, were in their state legislatures before becoming representatives. This is the most basic path by which one pursues a political career: State Representative –> State Senator –> U.S. Representative — > U.S. Senator. Especially talented candidates — for example, our President-elect — can and do bypass the stint in the House, but this is still fairly rare, even if it seems to be occurring somewhat more frequently than it once did.

The other major path toward becoming a senator is from the state executive branch. About one quarter of the current population of the Senate held statewide elected office before taking their new jobs, including 11 former elected governors. From among the other statewide offices, attorney generals have been on something of a hot streak of late, presently accounting for 7 seats in the Senate, but there are also state auditors, state treasurers, tax commissioners (Kent Conrad; I’d originally missed the fact that this is an elected office in North Dakota) and lieutenant governors.

A decent number of senators, on the other hand, didn’t even hold state-level elected office at the time of their election to the Senate. Mayors don’t run for senate all that often, but when they do they can be fairly strong candidates. Remarkably, however, the Senate also contains two members whose most recent office at been city council (congratulations, Joe Biden and Carl Levin!), as well as various county-level executives.

And then there are those members of the Senate who had never held elected office at the time of their victories; ten of these in all, with backgrounds ranging from entrepreneurship to television comedy. But, as I will demonstrate in a future article, while people who have never held elected office occasionally succeed in becoming senators, many more try and fail, and their batting average is not very strong overall.

No Prior Elected Office — 10 Senators

Carper, Gregg and Nelson (FL) had also served in the Congress at some point prior to their election to the Senate, although it was not their most recent elceted office.

Risch served briefly as Idaho’s governor, although he was never elected to the position, filling upon Dirk Kempthorne’s selection as Secretary of the Interior, nor did he hold that office at the time of his election to the Senate.

Lautenberg is the only current Senator to have served non-consecutive tenures in the Senate, having retired and then un-retired when Bob Torricelli made a fool of himself, so you can argue that his most recent elected office at the time his current elected tenure to the Senate had in fact been U.S. Senator.

Inhofe, Johanns, Menendez, Sanders and Voinovich had also been mayors at some point prior to thier election to the Senate, although it was not their most recent position.

Tom Udall had at one point been his state’s Attorney General; Bayh, Brown and Rockefeller had been Secretaries of State; Reid and Voinovich had been Lieuteant Governors, and Bond and Casey had been State Auditor — but again, these were not their most recently-held positions at the time of their election to the Senate.