Up in flames: After a yearlong investigation that analyzed millions of drilling records, the San Antonio Express-News published a four-part report on the impact of “flaring” in a south Texas shale field. John Tedesco and Jennifer Hiller explain how companies have, since 2009, “burned and wasted billions of cubic feet of natural gas — enough to meet the needs for an entire year of every San Antonio-area household that relies on the fossil fuel.”

No access to a toilet: According to Jan Eliasson, the U.N. deputy secretary general, “1.1 billion people in 22 countries … practice open defecation.” Eliasson explained to Sam Jones of The Guardian that “apart from the human dignity aspect, there is the health aspect and the environmental aspect.” The absence of a toilet can lead to dangerous situations, too. In May, two Indian girls were abducted, gang-raped and murdered after they left their homes in search of somewhere discreet to go. The Guardian article describes the trends in global sanitation (or lack thereof) since 1990 and, in accompanying animation, Alex Purcell explains the current lack of access to toilet facilities (in 99 seconds).

Not for the faint of chart: Metrico is a PlayStation Vita game that involves navigating a complex system of line graphs and pie charts. As Liz Stinson explains in Wired magazine, in some respects, the game is nothing new — every time someone hits a button on the console on any game, they’re inputting data. What is innovative about Metrico is that the gamer’s actions shape the obstacles she faces. (I spotted the game thanks to Nathan Yau, who recently blogged about it on FlowingData).

Superheroes land in June: To find out what a typical year in Hollywood looks like, Time magazine looked at the release dates of 8,298 movies since 1913 and the keywords submitted by IMDb users to describe them. There are no numbers here, so it’s impossible for us to see how “peak” the “peak month” is. But the visualization does show that if you’re an actor who’s been cast in a main role, you better hope your film doesn’t come out in December because your character will have a higher chance of getting killed.

Chronicle of terror: I first came across data visualization firm Periscopic in February 2013, when it launched a detailed interactive about U.S. gun deaths. Its latest interactive uses data from the University of Maryland’s Global Terrorism Database to visualize terror attacks committed by 25 groups active in 73 countries since 1970. The graphics are not simple, but neither is the data that they are attempting to convey: geographic spread, incidents, victims and how long the groups have existed.

Losing ground: ProPublica and The Lens have produced this rich interactive on the rapid land loss in the Mississippi Delta. Bob Marshall, Al Shaw and Brian Jacobs created text and maps that reflect two possible scenarios: one in which no action is taken, and another in which Louisiana’s coastal restoration plan is fully implemented. The team also charted the speed with which the area has been submerged since 1930.

Diverse country, segregated schools: According to the Civil Rights Project, African-American students are no less segregated today than they were in the late 1960s. Reed Jordan at the Urban Institute used that claim as the starting point for an investigation into the racial composition of public schools. Looking at data from the Department of Education, Jordan found that even in racially diverse parts of the country such as Michigan, Pennsylvania and New York, few white Americans attend diverse public schools. 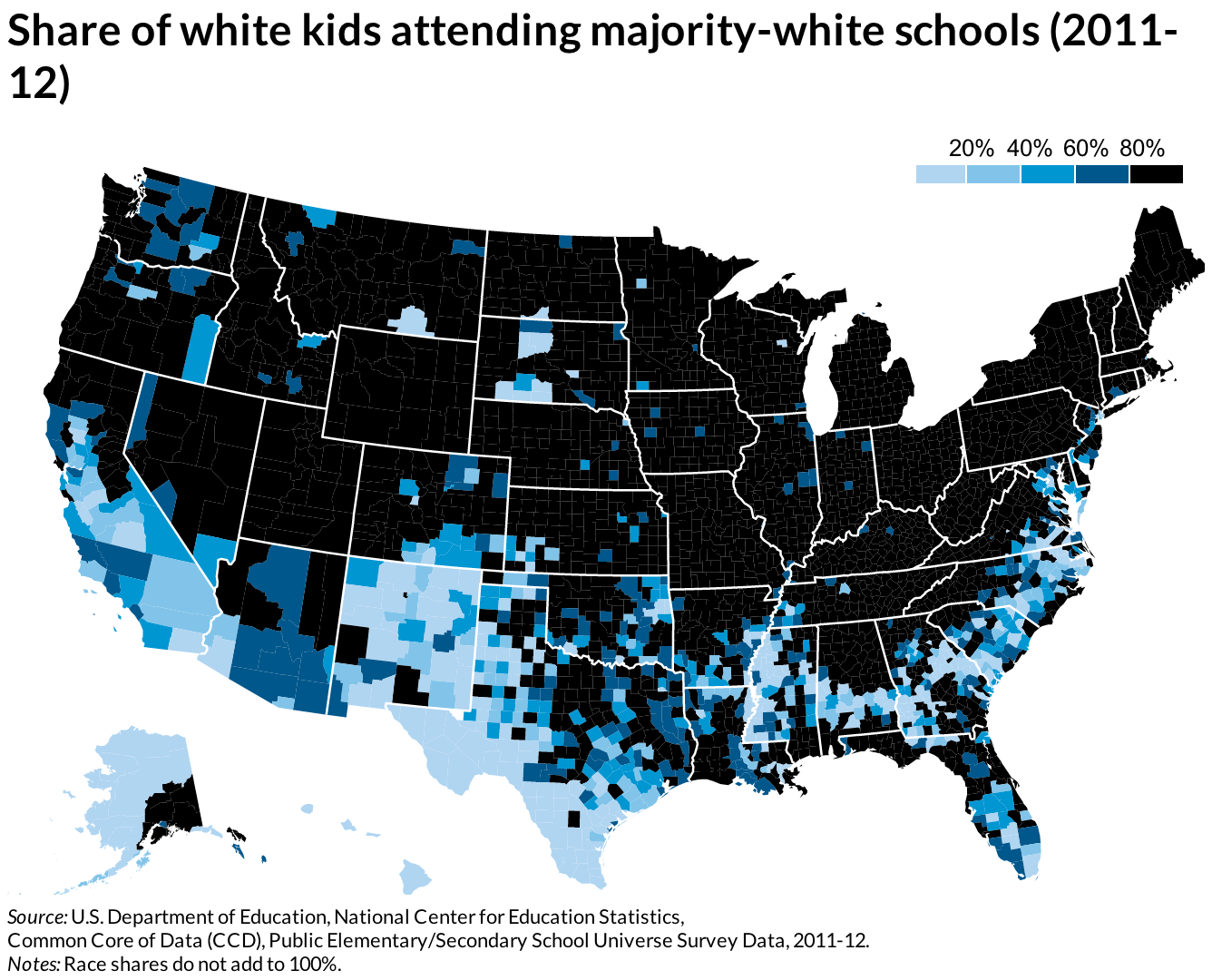 When Americans work: Drawing on data from the American Time Use Survey, Quoctrung Bui of NPR’s Planet Money plotted the typical working hours of U.S. employees by occupation. The interactive allows us to compare, for example, a journalist to a factory worker and see that the former is far more likely to sleep in (and less likely to be working at midnight). 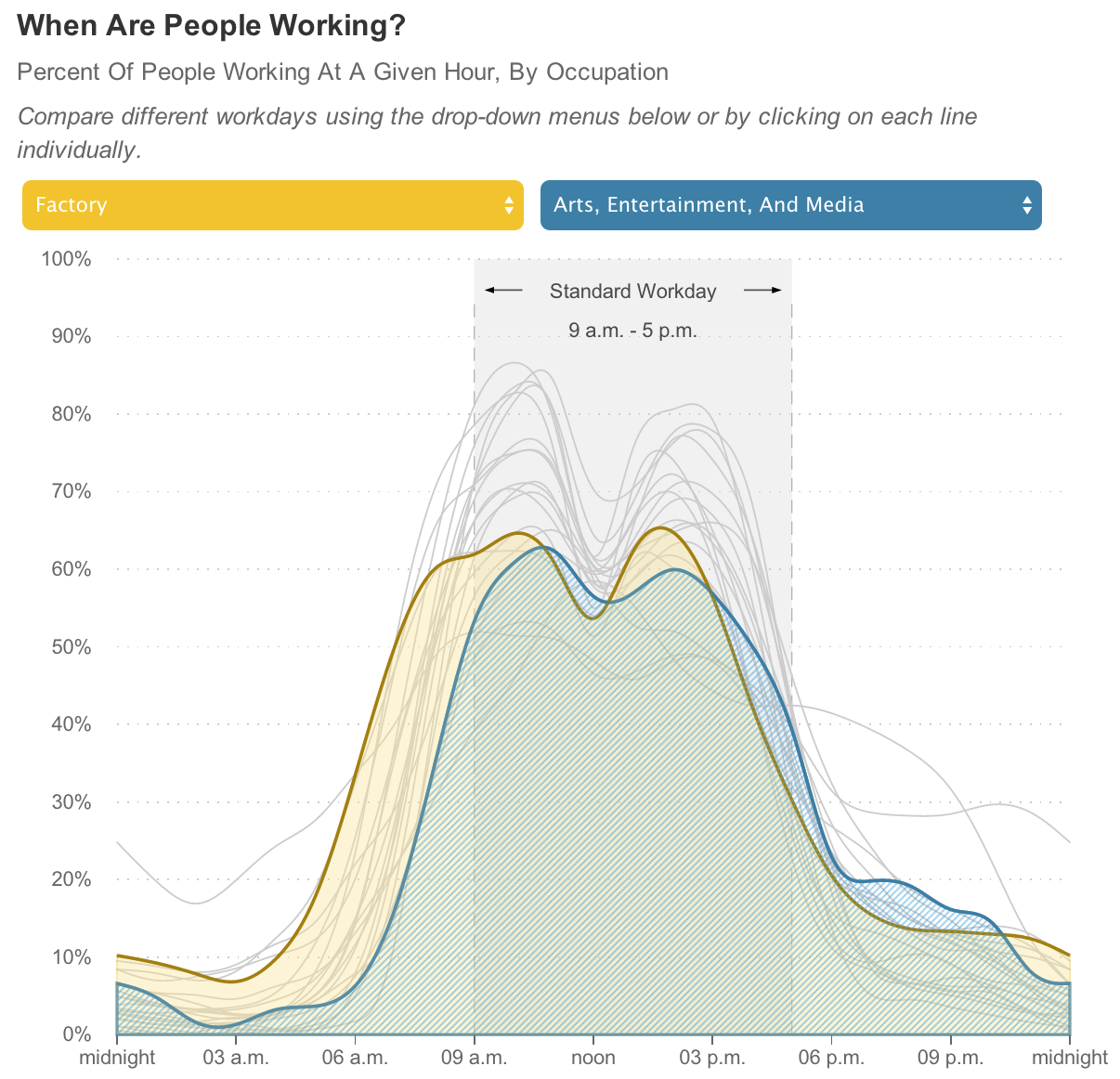