Standard & Poor’s downgraded Russia’s credit rating Friday for the first time in more than five years. The decision could have big consequences for the Russian economy because credit ratings partly determine how expensive it is for a country to borrow money on international markets. The agency cited the crisis in Ukraine as a reason for its decision to cut Russia’s rating from a BBB to a BBB-. An S&P statement said:

“The tense geopolitical situation between Russia and Ukraine could see additional significant outflows of both foreign and domestic capital from the Russian economy and hence further undermine already weakening growth prospects.”

But I wondered just how important a factor Ukraine was in S&P’s decision: Was it more about the “tense geopolitical situation” or the “already weakening growth”? The agency publishes the criteria it uses to assign a credit rating, one of which is “political risk.” But it still doesn’t say how much it relies on that indicator.

Maybe by looking at international data we can spot some trends that could answer that question. So I looked at each country’s S&P credit rating and converted each score to a number. The lowest rating (CCC, which means “currently vulnerable”) was assigned a score of zero, while the highest rating (AAA, which means “extremely strong”) was given a score of 17.

Then I looked at data from the Global Peace Index. Each year, researchers from the Institute for Economics and Peace use 22 quantitative and qualitative indicators to measure peace in countries around the world. They define peace as “the absence of violence and the absence of the fear of violence.” Higher scores reflect higher levels of violence.

There are at least two drawbacks with comparing these two sources. First, they don’t cover the same places — I could only find 107 countries that were analyzed by both sources. Second, I’ve taken Friday’s S&P ratings, but the Global Peace Index was last updated in June, well before tensions in Ukraine reached a crisis point.

For those 107 countries, is there any correlation between credit ratings and peace ratings? There’s a weak one. And there are plenty of outliers — look at Iceland, a country considered the most peaceful in the world, according to the Global Peace Index, and yet assigned a rating of BBB- (Iceland’s banking sector collapsed in 2008). There’s also plenty of variation in levels of conflict among the countries considered AAA by S&P. 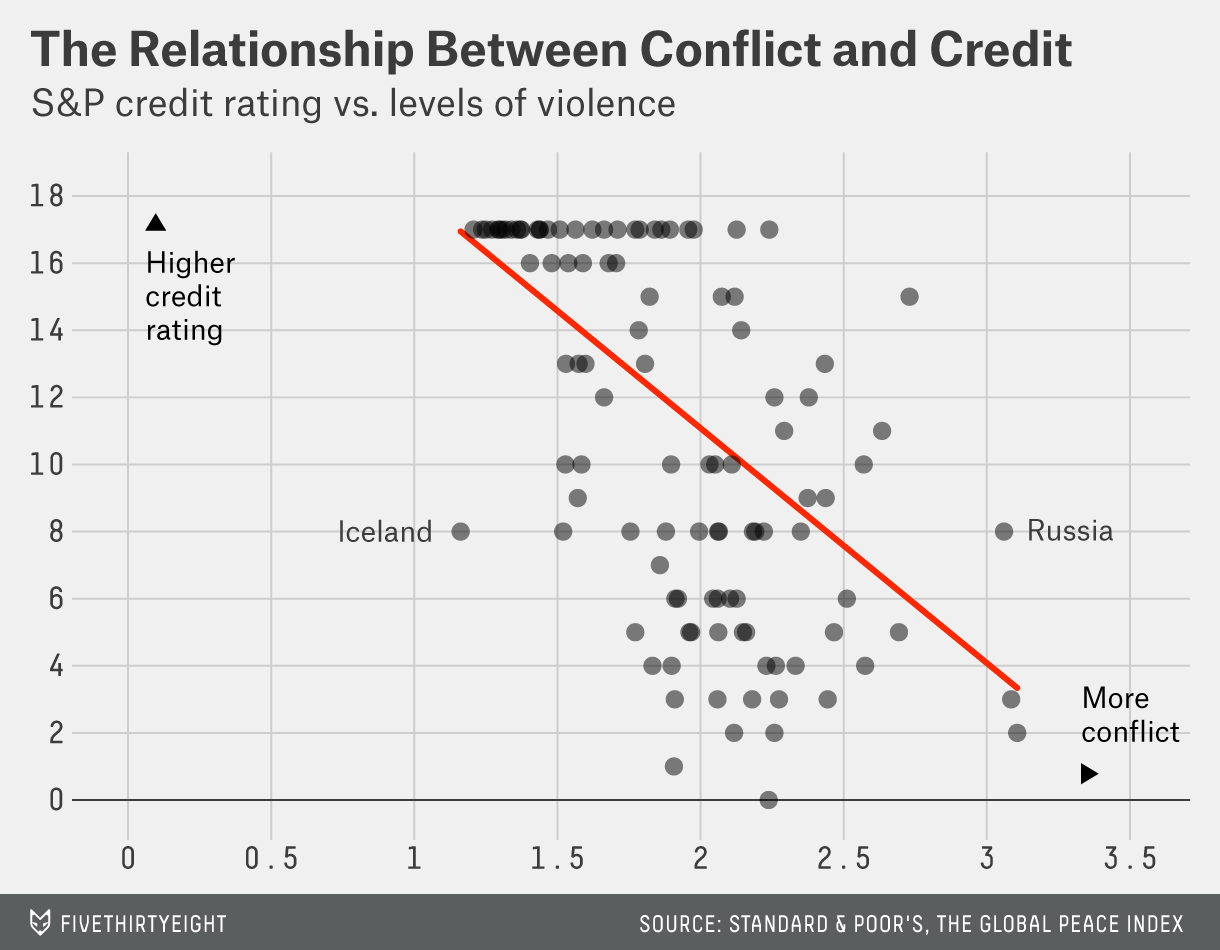 Sitting right down on the x-axis, Ukraine has the lowest score possible from S&P — but remember, its peace-index rating doesn’t reflect current events in the country.

If deciding on correlation here is tricky, causation should be treated with even more skepticism. Cause and effect could go in either direction. We may look into this further, perhaps controlling for the levels of wealth in a country, and see what the relationship looks like.