Has anyone else noticed how crazy things are getting in the Connecticut Senate race? To be honest, I wasn’t following it that closely, but it seemed like every time I turned my head there was a new story coming out of the Nutmeg State. Let me summarize some of what’s going on in this race, which as you can see to the left Nate currently ranks as the fifth most competitive Senate race and second most competitive non-open seat race. 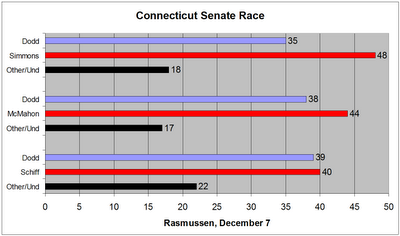 I say “remaining three” because last week former Ambassador to Ireland Tom Foley suddenly dropped out of the race so he could instead enter the GOP primary for the state’s open-seat governor’s contest.

Oh, but it gets better. Just when I thought I would never again have to conjure the blast-from-the-past name or image of Bruno Sammartino, Politico runs a story this week about the growing number of wrestling industry detractors speaking up in opposition to Linda McMahon’s GOP candidacy. McMahon is wife of WWE entrepreneur Vince McMahon and former WWE CEO, but apparently she is far from beloved by many familiar with her and her business practices. Politico’s Erika Lovley quotes Sammartino and several other former WWE stars poor-mouthing Mrs. McMahon’s leadership. This twist comes a month after Connecticut Democrats filed what seems like a frivolous, but headline-grabbing FEC complaint against McMahon and the WWE for removing some offensive videos from YouTube.

Best I can tell, Quinnipiac conducted the most recent poll of likely Republican primary voters, and the results showed Simmons leading. Given Simmons’ wider margins over Dodd, and the fact that he is the kind of virtually-extinct Republican that can actually win statewide in New England, Connecticut Republicans would be wise to nominate him–and Dodd should be worried if they do.