There seems to be an unusually strong reaction in the trading markets this morning, with John McCain’s stock at Intrade having gained 5 points, moving up to 44.7 percent. There are a number of reasons that trading markets can move, but I don’t think it is warranted in reaction to the Rasmussen tracking poll alone, which today showed Barack Obama’s lead diminishing from 5 points to 2.

The reason is that, as many of my commentators have pointed out, the movement was in part the result of a very good Obama night of interviews cycling out of the three-day rolling average. A while ago, I developed an algorithm for trying to extract the daily results for tracking polls from the rolling averages. I’ll describe this methodology at more length when we have a bit more time to work with — this is a slightly more difficult problem than it seems at first glance, and by no means is the method foolproof. But here is its best estimate of the results from individual nights’ interviews in the Rasmussen tracking poll going back to Saturday the 22nd, when Joe Biden was officially rolled out as Barack Obama’s VP: 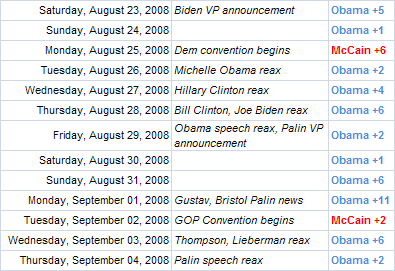 Note that Monday night — when Gustav dominated the news and the disclosure of Bristol Palin’s pregnancy had broken — was a very good night of polling for Obama, something which could easily enough be inferred because he moved up by 3 points in the rolling average that day. The algorithm estimates that the polling that day was Obama +11. But that day cycled out of the three-day rolling average today, meaning that Obama was liable to lose ground unless he had another equally huge night.

Our best estimate of the result from last night — the first night in which voters had a chance to react to Sarah Palin’s speech — was Obama +2 (actually, Obama +1.7). That’s down from his results for most of the past week or so, but not really that bad after what was supposed to be a huge emotional crescendo for the GOP.

Remember, moreover, as I’ve said many times, that a bounce is usually just a bounce — meaning that it is something ephemeral which will fade fairly quickly. While the effects of various sorts of news events are difficult to disentangle from one another, I would guess that if McCain can’t close to at least a rough tie in the tracking polls over the weekend, we will most likely see Obama a couple of points ahead by a week from today, once the race has a chance to stabilize a little bit.

EDIT: The Gallup numbers (now at Obama +4 for the three-day average) tell a similar story … we show the Thursday result as Obama +1 (more precisely, Obama +1.4): 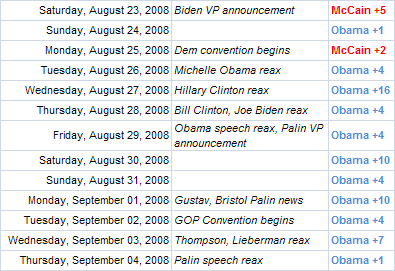 EDIT #2: There’s also a discussion in the comments about Rasmussen’s party ID weightings, which are adjusted on a monthly basis. If I attempt to retrospectively adjust the July and August results to reflect Rasmussen’s present party ID targets, I wind up with an estimate of Obama +3, rather than Obama +2, for yesterday’s interviews. The issue of weighting in general adds uncertainty to this process, however, as I don’t know exactly when and how Rasmussen implements their party ID targets each month.