One of the unfortunate ironies of climate change is that its greatest medium-term impacts are liable to be on precisely those countries — especially poor countries in equatorial regions — which are the least empowered to do anything about it. Not only that, indeed, but according to a new Gallup survey of residents across 128 countries, many of the people in these locations may be literally unaware of the threat that global warming presents.

Earlier this year, the World Bank ranked countries according to their vulnerability to five particular harms from climate change: drought, flooding, storms, sea-level rise, and agricultural impact. Some 20 nations ranked either in the top 12 in at least two categories or the top five in any one category and were included in the Gallup survey.

In those countries, on average, just 47 percent of the residents in the survey said they knew something about climate change at all. This compares to 61 percent for all countries worldwide, and 93 percent in the highly-developed G8 countries. 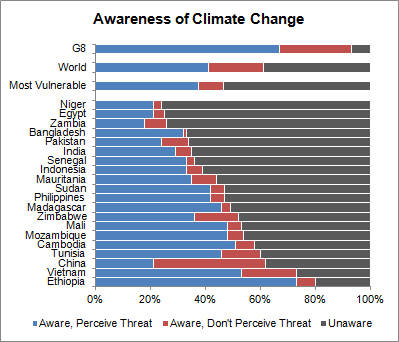 Importantly, it’s not the people in these countries dismiss the threat. Of those people that are aware of climate change in these countries, 81 perceive it as a somewhat or very serious threat — this compares to 72 percent in the G8 nations or 67 percent worldwide. Rather, they are literally unaware of the problem. (A notable exception are the Chinese, who are reasonably aware of climate change but doesn’t seem to regard it as threatening.)

Nevertheless, on balance, the NGOs were mostly focused on cultivating changes in public opinion and public policy in the developed world. And the developing world, indeed, is where most of the political power resides for the time being. But there’s a lot of untapped people power in nations like Bangladesh, Egypt, India and Indonesia, and Niger, which if catalyzed, could help to give these countries a greater voice at the negotiating table.