Read enough political coverage, and you will find someone willing to advance almost any kind of position, despite (or perhaps because of) its being counterintuitive.

The latest fad seems to be articles claiming that if the Supreme Court declares President Obama’s health care bill to be unconstitutional, it would be good news for him politically. This position has been argued by the Democratic pollster Mark Penn, the Democratic strategist Bob Shrum and CNN’s James Carville, among others.

The theory seems to rest on the notion that Mr. Obama could use the health care bill to rally his base, either by railing against the Supreme Court or by trying to advance a new plan.

There are a few basic problems with it:

Obama and the Base

Mr. Obama’s approval ratings are now 84 percent with Democrats and 87 percent with liberal Democrats, according to the latest Gallup poll. Those numbers are fairly normal by historic standards.

In Gallup polls conducted in April of the years that incumbents were running for re-election, presidents have had a 78 percent approval rating on average within their own parties. This was despite the fact that these presidents had a slightly higher overall approval rating, 53 percent, than Mr. Obama does now.

In fact, Mr. Obama has the second widest gap between his intraparty support and his overall support at this stage of the race, trailing only George W. Bush in 2004. 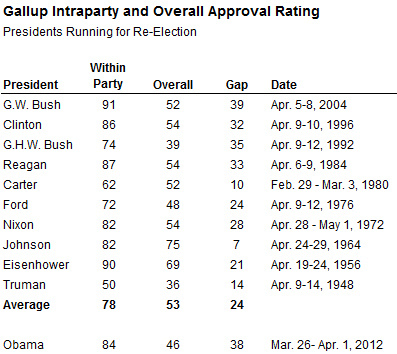 Nor are there many signs of a large “enthusiasm gap” between partisans on either side. Instead, it seems to have narrowed from 2010, with some polls suggesting that Democratic voters are slightly more enthusiastic than Republicans, and other surveys saying the opposite.

Mr. Obama should still have plenty of issues to rally his base, like the Republicans’ tax plan and the nation’s gradually improving economy (base voters care about that just like swing voters do), regardless of what the Supreme Court does with his health care bill.

Among Swing Voters, the Health Care Bill Is Not Very Popular

The polling numbers on the health care bill have been remarkably stable since it was passed in 2010, even as Mr. Obama’s overall approval rating has fluctuated. Currently, an average of surveys shows that 40 percent of voters support the bill and 48 percent oppose it.

Among Swing Voters, the Supreme Court Declaring the Health Care Bill Unconstitutional Will Not Make It More Popular

It is possible that a ruling against the health care bill may damage the Supreme Court’s standing, but that is not our focus here, nor is it the basis of the claims being advanced by Mr. Penn and others. Instead, the question is whether the marginal effect of the health care bill being declared unconstitutional would be  good news or bad news for Mr. Obama. And those numbers are not auspicious for him.

A recent Pew poll found that 23 percent of voters took a less favorable view toward the health care bill after hearing it argued before the Supreme Court and 7 percent a more favorable one. Most voters were unmoved from previous position.

It can credibly be argued that the health care bill will not make much difference one way or the other to the campaign. Mr. Obama had been giving it only limited emphasis, and is not the easiest issue for the likely Republican nominee, Mitt Romney, to focus upon because he passed a similar bill in Massachusetts. Moreover, most voters already have deeply held perceptions about the bill, and the ruling is expected to come down in June, well in advance of the election.

However, the argument that the bill being struck down would actually help Mr. Obama seems to have little grounding in the evidence — nor, frankly, in common sense. Among the voters that are most critical to Mr. Obama’s re-election prospects, the Supreme Court is more popular than the health care bill. If the justices declare one of the president’s signature accomplishments to be unconstitutional, it would not be a boon to him.