Today we continue our Presidential Geography series, a one-by-one examination of the peculiarities that drive the politics in all 50 states and the District of Columbia. Today’s stop: Wisconsin, the Badger State. FiveThirtyEight spoke with Charles Franklin, the director of the Marquette University Law School Poll and a professor in the political science department at the University of Wisconsin-Madison.

Mitt Romney’s decision to name Representative Paul D. Ryan as his vice-presidential choice not only throws Mr. Ryan into the campaign grinder, but also adds his home state, Wisconsin, into the mix. 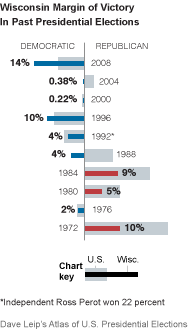 Wisconsin has had something of a “to be, or not to be” swing-state status during this year’s race. The state has been treated as both a genuine tossup and a lock for President Obama. Before Mr. Ryan was named to the ticket, the FiveThirtyEight model saw the state closer to the latter: Mr. Romney had just a 12 percent chance of carrying the Badger State. But the Ryan pick boosted that to 20 percent.

Those improved odds are based on a two percentage point bonus that the model accounts for in the home state of each vice-presidential candidate — the average bump that a running mate has added since 1920, according to a previous FiveThirtyEight analysis.

But the effect a vice-presidential candidate has had on his or her home state has varied widely. Is there any inherent aspect to Wisconsin’s political geography that might provide clues as to whether Mr. Ryan will have a larger, or smaller, impact on the Nov. 6 vote in Wisconsin? 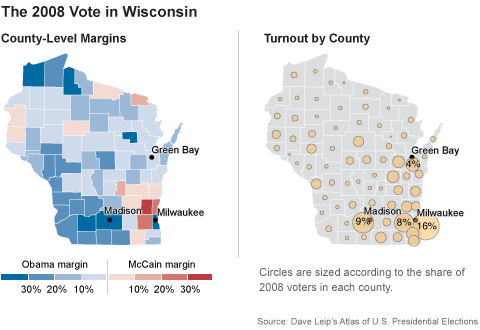 Wisconsin is a deeply polarized state (see, Walker, Scott). But that is fitting — the state helped give rise to both the Republican Party in 1854 and the progressive movement, through former Wisconsin Gov. Robert La Follette Sr., who was born one year later in 1855. A century or so ago, when the progressive movement and the Republican Party were close cousins, Wisconsin was a reliably red state. (It voted for the Democrat in the presidential race just twice between 1856 and 1928.) Now that these are viewed as incompatible philosophies, their sharp edges manifest themselves in different ways throughout the state.

The suburban communities to the immediate west of Milwaukee are the Republican power centers in Wisconsin. Waukesha County, in particular, has some of the most heavily Republican suburbs in the nation.

Mr. Ryan represents the First District, to the south of Milwaukee. Previously, the First District included just a small part of those suburbs, but a larger chunk of that Republican territory was added to Mr. Ryan’s district in the most recent round of redistricting, Mr. Franklin said.

Nevertheless, Mr. Ryan has not represented an overwhelmingly conservative district. It has leaned slightly to the right, but Mr. Obama was able to carry the First District in 2008, albeit, with just 51 percent of the vote. Winning a district doesn’t earn you any points if you lose the state, but Mr. Ryan’s ability to win easily in a not-so-easy area suggests that he has some skill in winning over a skeptical audience — at least in Wisconsin.

Both Gov. Scott Walker and Mr. Obama have net positive approval ratings in Wisconsin. That suggests that there is a group of true independent voters in the state, who can be influenced to vote for either Mr. Romney or Mr. Obama, Mr. Franklin said.

That’s exactly where Mr. Ryan might be able to help Mr. Romney in Wisconsin, Mr. Franklin said. While nationally, the opinion of independent voters who have heard of Mr. Ryan is about evenly split, his ratings are respectable among Wisconsin independents.

It is unlikely, however, that Mr. Ryan’s Wisconsin roots will be enough to win over many Democrats in America’s Dairyland, Mr. Franklin said.

The Democratic anchors in Wisconsin are the cities of Milwaukee and Madison. As both the state capital and home to the main branch of the state’s university system, Madison is especially Democratic. The farming counties in western Wisconsin, along the Mississippi River, also tend to vote Democratic, and voted for Mr. Obama in 2008 — perhaps a testament to their progressive heritage, despite demographics (white, rural and working class) that would be problematic for Democrats in most other contexts.

The two regions of Wisconsin that are harder to predict are the Fox River Valley, north of Milwaukee, and the sparsely populated farm counties in the northwest.

Northern Wisconsin and the Fox River Valley, near Green Bay, are also mostly white and working class. Employment is centered around agriculture and paper mills. Mr. Obama did surprisingly well in both regions in 2008. But often, their traditional Republicanism prevails: George W. Bush won almost every county in these regions in both 2000 and 2004.

Mr. Obama’s unexpected strength in the Fox River Valley and northern Wisconsin in 2008 helps to explain how he easily carried the state after razor-thin margins in the past two presidential cycles. The Obama campaign managed to flip a large swath of the state.

Columbia County may provide some early clues as to how Wisconsin might vote on Nov. 6. It sits just north of the liberal Dane County, home to Madison, but is also not too far removed geographically from the heavily Republican Milwaukee suburbs, or the red-tinged Fox River Valley.

A Public Policy Polling survey from early June found Mr. Obama leading Mr. Romney by six percentage points in Wisconsin. But the poll also found that an Obama-Biden ticket led a Romney-Ryan pairing by just one percentage point, 47 to 46 percent. 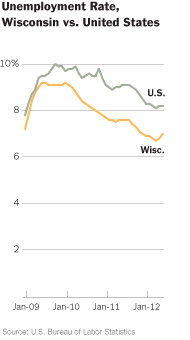 But that is just one data point. Outside of his own district, Mr. Ryan is still fairly unknown, even in Wisconsin. In a July Marquette University poll, 35 percent of Wisconsin voters said they did not know enough about him to render a favorable or unfavorable verdict. That percentage is just slightly lower than the share of people who have never heard of Mr. Ryan nationally.

As a member of the House rather than a statewide officeholder, Mr. Ryan’s relative obscurity makes predicting his effect on the election more difficult. How an independent voter in Green Bay responds to Mr. Ryan, including his controversial proposal to remake the federal budget, may not be all that different from a how an undecided voter responds in Manchester, N.H. or Lakeland, Fla. It’s possible that Mr. Ryan could provide an average home-state bounce of about two points to Mr. Romney, but it would likely be highly concentrated in his home district, with few obvious gains elsewhere.

Whether Mr. Obama can replicate, or even approximate, his 2008 performance in northern Wisconsin and the Fox River Valley will go a long way toward determining whether he carries Wisconsin again. Republicans may be hoping that Mr. Obama’s 2008 support was miles wide, but inches deep.

Wisconsin’s economic recovery has also been more sluggish than other states in the Midwest. With a sputtering economy hobbling Mr. Obama’s re-election effort, and now with Mr. Ryan on the ticket, both northern Wisconsin and the Green Bay region could find reasons to revert to their Republican ways. That would make Wisconsin a much closer contest.