Economics 101 tells us there are basically two things you can do with your money: Spend it and enjoy the benefits of your new purchases today, or invest it — with the hope that you’ll make more money in the future. This basic trade-off between consumption and investment applies to companies as well. Over the past decade, the balance in corporate America has swung toward consumption, raising concerns about the U.S.’s future economic growth.

Let me explain what “consumption” means in a company’s case. Rather than saving its money to grow the business, the company gives back whatever money it has made in profits to its owners, or shareholders. A company can do this in two ways: paying dividends or buying back its stock. Either way, the result is the same: The money’s no longer available for the company to pour back into the business. In 2012, U.S. nonfinancial companies1 returned nearly $560 billion to shareholders — more than double what they paid out just a decade earlier. 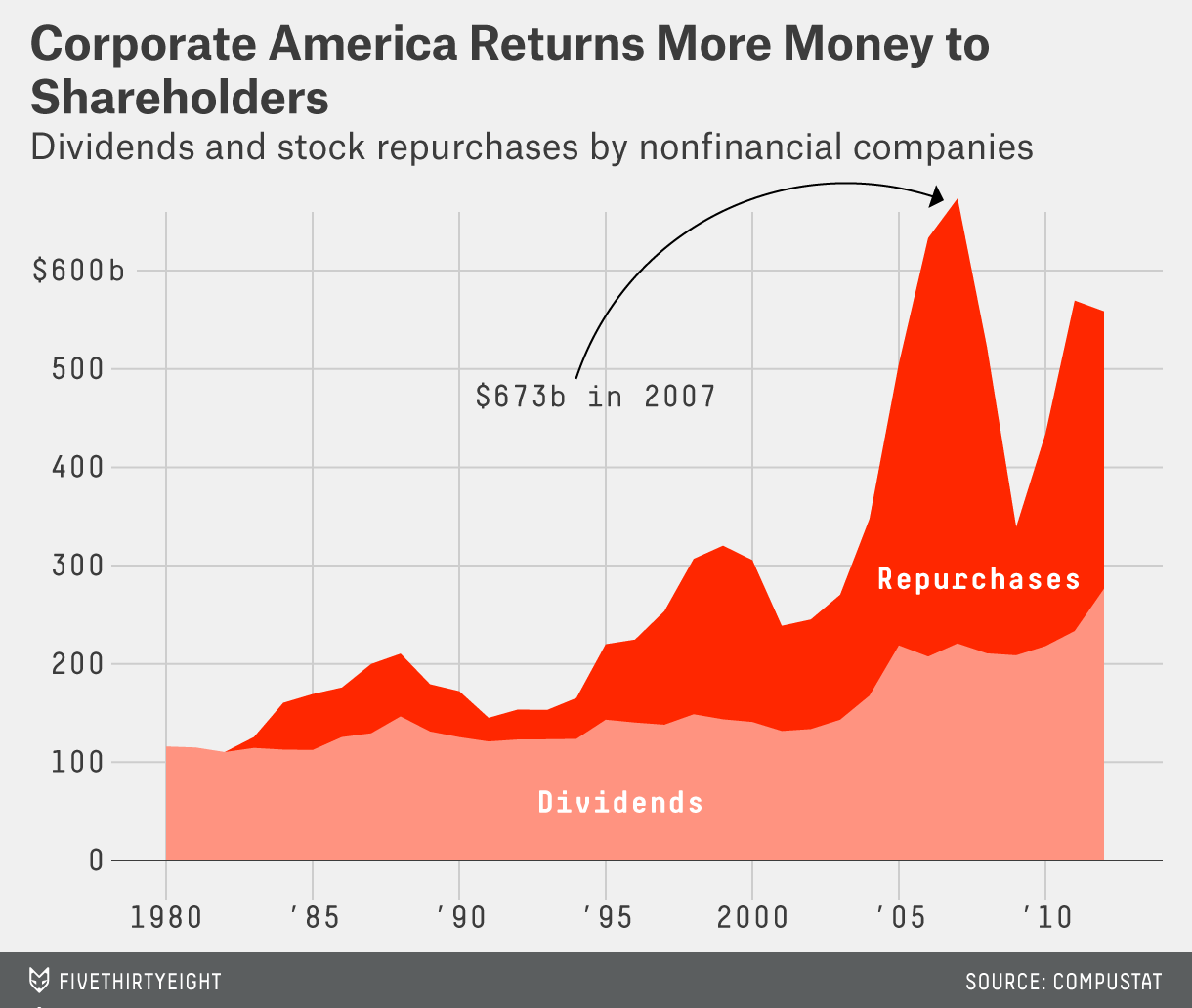 This isn’t the typical story line the financial media report. Most companies are criticized for saving too much, for “hoarding” cash. Apple, perhaps the poster child for this, holds about $150 billion in cash and marketable securities on its balance sheet.2 And Apple isn’t alone. In general, managers like when their firms hold cash because it gives them more flexibility and insulates them from economic shocks. Shareholders, on the other hand, worry that managers will do dumb things with the cash, including wasting it on value-destroying acquisitions and other pet projects, like a new Learjet or a couple of Rembrandts for the bathroom. As a fraction of assets, U.S. companies have more than doubled their cash holdings since 1980.3

What is less well-known, however, is that a relatively small group of large U.S. blue chips — companies including Coca-Cola, McDonalds and IBM — has substantially increased the amount of cash it has returned to shareholders. In 2007, before the financial crisis, U.S. companies returned $673 billion in cash to shareholders, which represented 90 percent of aggregate corporate earnings. That’s a mind-boggling amount of money. About three-quarters of this amount is attributable to a small set of very large companies, which increasingly dominate the distribution of earnings and payouts.4

To understand the evolution of payouts, some history is in order. In the 1970s, most public companies paid dividends, typically about 30 percent of earnings. In the early 1980s, a change in the securities laws allowed firms to buy their own shares for the first time, which led to the emergence of stock repurchases as an alternative way of returning cash to shareholders.5 Managers would buy back their stocks when they viewed them as cheap, and the stocks tended to outperform in the months after the buyback.

As repurchases grew in popularity over the 1980s and 1990s, dividends seemed to fade. In a widely cited paper in 2001, Eugene Fama and Kenneth French documented the “disappearing dividends” phenomenon: From the mid-1970s to the late 1990s, the fraction of U.S. companies that paid dividends fell from about two-thirds to one-fifth. Given the tax advantages of repurchases — dividends are taxed as income at investors’ marginal tax rate, which is usually substantially higher than the long-term capital gains rate that would be relevant if investors sold into a repurchase — as well as the inherent lack of commitment associated with repurchases, many thought dividends would disappear entirely.6

But based on research that I’ve done with colleagues at the University of Chicago, Eric Floyd and Nan Li, our evidence shows that dividends have bounced back strongly, fueling a massive surge in overall payouts. After sluggish growth in the 1990s, aggregate dividends have more than doubled in real terms over the same period, from $134 billion in 2002 to $276 billion in 2012 (these are 2012 constant dollars). One of the reasons dividends survive7 is that the commitment involved is beneficial — it disciplines management’s investment decisions.

The growth of repurchases is even more impressive. Repurchases grew unevenly through the mid-1990s but then took off. In 1998, repurchases exceed dividends for the first time ($158 billion vs. $149 billion).8

In fact, most companies that return cash to shareholders use both repurchases and dividends. For example, in 2013, Coca-Cola paid its shareholders dividends of $5 billion and returned an additional $4.8 billion through repurchases. Repurchases have gradually become pro-cyclical (increasing in good times when stock prices are high) rather than counter-cyclical. Given that stock prices are at record highs, this raises questions about the current mania for repurchases — do we want companies buying back shares when they are most expensive? (Perhaps managers think stock prices will go even higher.)

Another way of calibrating payouts is to compare them with the amounts companies invest. The graph below shows that the ratio of payouts to investment (measured as spending on new capital, such as plants and equipment, as well as research and development) for U.S. companies is about 30 percent historically, meaning that companies have usually invested about three-quarters of the cash they earn. Beginning in 2001, however, this ratio climbs steadily, to the point that firms are now paying out, relative to investments, about twice as much as ever before. 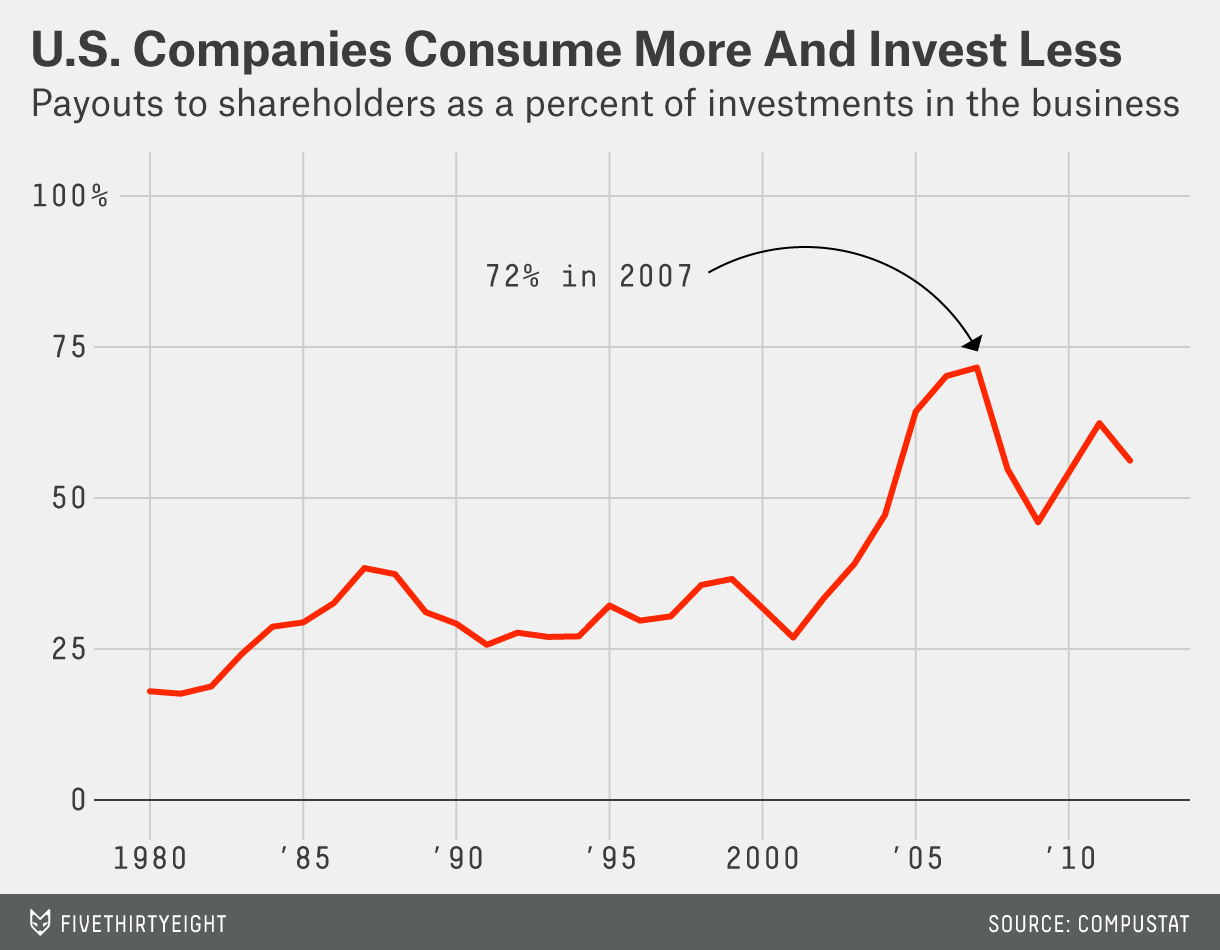 The bottom-line is that market pressures — investors’ insatiable desire for ever-larger dividends and buybacks — are forcing large U.S. companies, which are vital to our economy, to pay out more cash than ever before, raising questions about where their future earnings — and, ultimately, the U.S.’s overall economic growth — will come from. Equally troubling, this mania for buyouts is taking place when the market is at record highs, in part to try and juice earnings to sustain these valuations. Not to be a doomsayer, but is hard to see how all of this ends well.

Douglas Skinner is an accounting professor at the University of Chicago Booth School of Business. His research focuses on corporate financial reporting, disclosure and issues of corporate governance.