Chuck Todd opines that the general election numbers for the Democrats are presently at their floor:

Currently polls show McCain either narrowly ahead or even with both Hillary Clinton and Barack Obama. It is impressive considering how poorly the GOP, and specifically the president, are viewed by the public.

But it is a faux lead. If the de facto Democratic nominee is clear within the next 4-6 weeks, that person will see a poll bounce. And according to GOP pollster Steve Lombardo, it could be one heck of a bounce, like post-convention. He anticipates the Democratic candidate will move up 10 points once the primary race is over. […]

The initial bounce will set the polling numbers – the floor and ceiling – for the Democrats, who clearly have the generic advantage this cycle. Those parameters will dictate the morale within the GOP base.

If McCain’s is hanging in, behind by 10 or so points, then it is clear he will have a shot. If the bounce pushes the Democratic nominee to as much as a 15 point lead, it may be very demoralizing to the GOP.

Todd’s expectation is that if the Democratic candidate wraps up the nomination within the next 4-6 weeks, he can expect to see a bounce of about 10 points in the polls. And yes, I’m using the male pronoun “he”, because “next 4-6 weeks” means “not long after North Carolina and Indiana”. The only candidate who can wrap up the nomination within that time frame, barring some unforeseen scandal or contingency, is Barack Obama.

Todd is not necessarily predicting how long the bounce will last. (Indeed, the term ‘bounce’ can have two somewhat opposite connotations, sometimes signifying a temporary shift in the polls and sometimes a permanent one; we might be better off using a term like ‘bubble’ in the first case and a term like ‘shock’ in the latter). But he’s saying the election will wind up somewhere between where it is now, and where it is now plus 10 points for the Democrat. Those are his floor and his ceiling.

This assessment seems somewhat optimistic from where I sit; I agree with Todd’s ceiling for the Democrats, but I think the floor is lower in the event of a badly-managed campaign. With that said, if I had to guess whether the polls for the Democrat are higher or lower on June 15th than they are now, I would guess higher — if the nomination has been determined by then.

But let’s try and be a little more specific about this. If it’s Obama who locks down the nomination, most of his bounce would presumably come from among the 28 percent of Clinton-supporting Democrats who are presently telling pollsters that they plan to vote for John McCain. What if, say, half of these Clinton defectors — 14 percent of her voters overall — actually wind up casting their ballot for Barack Obama in November? How would his electoral math change?

To get at this, we first need to estimate the number of Clinton-supporting Democrats. I will do this by multiplying the percentage of voters who identify as Democrats in each state by the percentage of Democrats who supported Clinton in that state’s primaries or caucuses. (For states that have not yet had a primary, I use current polling averages from pollster.com. For the two states that have neither had a primary nor have any polls — these are Montana and South Dakota — I assume Clinton’s support to be 40 percent). Then, I multiply the result by 14 percent. For example, the calculation would go as follows in Ohio:

35% of the electorate identifies as Democrat x
54% of Democrats supported Clinton in the primary x
14% of these voters are showing up as McCain voters in the polls, but will eventually vote for Obama.

That works out to 35% x 54% x 14% = 2.6% in Ohio. So — Obama would gain 2.6 points in the Ohio polls? Actually, he’d gain twice that amount — 5.2 points — because when a defector switches back to Obama, not only is he gaining a vote, but McCain is losing one. So what I’ve done is to add 5.2 points to Obama’s polling numbers in each of his Ohio polls, and rerun my simulations. I also performed the same calculation in each of the other 49 states (the precise amount of the bounce varies some from state to state; it’s as high as 8.0 points in Arkansas, but as low as 1.1 points in Idaho).

So what happens when we do this? The effects are relatively dramatic. 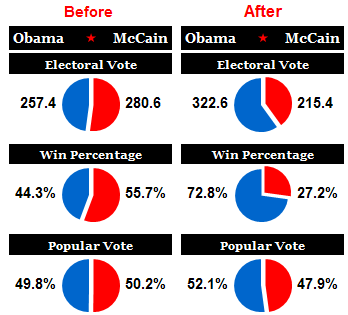 Obama gains a net of 4.6 points in the popular vote — from 0.4 points down against McCain, to 4.2 points ahead. Perhaps more importantly, his projection improves by 65 electoral votes, and he goes from winning the election 44% of the time to 73% of the the time.

We can also look at what these extra votes would do for Obama on a state-by-state basis: 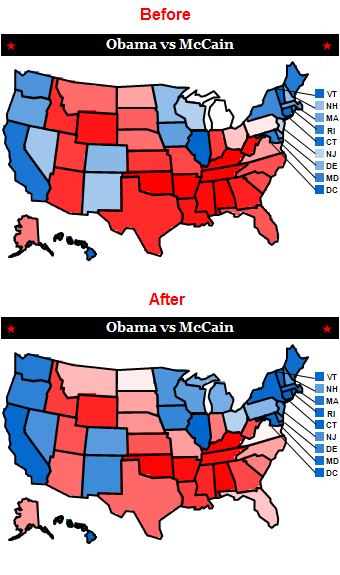 That is perhaps not all that dramatic a difference visually, but look at where the colors are changing. Obama goes from having a 46% chance of winning Pennsylvania to a 74% chance, from a 39% chance of winning Ohio to a 65% chance, and from a 50% chance of winning Michigan to a 77% chance. Under this scenario, the most closely-contested states on election day would be Virginia, North Dakota, Florida, and Montana, all of which have been GOP strongholds in recent elections, and any of which would be the cherry on top of Obama’s electoral sundae.

You might assume that, being a professed supporter of Barack Obama, I’m running these numbers as a means of suggesting that Hillary Clinton should concede the nomination. But that’s not really the case. What matters, after all, is not what Clinton does, but what her supporters do. My feeling is that it’s very important to Clinton supporters (and likewise, to Obama supporters) to feel like their candidate has gotten a fair fight. I don’t know whether it’s disrespectful to Clinton to suggest that she should concede, but I do think it’s disrespectful to her supporters.

The key concept here is legitimacy. Obama supporters are used to thinking about legitimacy solely in terms of a potential Hillary Clinton nomination (e.g. “Hillary would not be legitimate if the superdelegates overturned the pledged delegates”). However, from a Clinton supporter’s point of view, there is sort of a sliding scale of legitimacy with respect to a potential Barack Obama nomination. If Obama is to wind up with anything near this 65-EV “unity bounce”, he’ll have to be toward the top of that scale.

The singular easiest way for him to do would be to win Pennsylvania. If that happened, Obama would have won a major victory on Clinton turf; her supporters might be disappointed by the result of the nomination process, but they’d see it as manifestly fair and legitimate. Failing that, the next best way would be for Obama to win both Indiana and North Carolina. Failing that, gain a net positive number of pledged delegates and popular votes between Pennsylvania, North Carolina, and Indiana, at which point the nomination would probably be conceded. Failing that, win the overall popular vote plus the pledged delegate count. And failing that, lose the popular vote, but win based on pledged delegates. At some point along this spectrum, of course, we’d have gotten to the point where many Clinton supporters would not see an Obama nomination as manifestly legitimate.

What needs to be understood about all the money that Obama is pouring into Pennsylvania, and all the time he’s spending in Indiana, is that it’s not so much a primary strategy as a general election strategy. Few things that Obama could do would increase his chances of winning the general election more than winning the Pennsylvania or Indiana primaries. The Unity Bounce is likely to be much more substantial if Obama closes out the nomination process with a victory, rather than winning it sort of inertially.

In the meantime, Obama needs to be very, very careful about sending any sort of message that Clinton should end her campaign. If Clinton were to concede while she was perceived as having a legitimate path to the nomination, Obama’s nomination would feel force-fed to many of her supporters. Clinton, for her part, needs to be more careful than she has been about undermining the legitimacy of what Obama has accomplished so far. Arguments that she might think are dogwhistles to the superdelegates might in fact be picked up by many of her supporters — and they might act on those arguments in November.

This cycle is inherently relatively favorable to the Democrats, and we can see what sort of upside they have if Democrats simply vote along party lines. But both campaigns have had some blind spots in terms of thinking about how the arguments they’re making now could play out in November. I don’t understand why the messaging from both Democratic campaigns isn’t a simple “we want to win every vote we can, and we’re taking it one vote at a time.”