One of the more interesting questions posed on this year’s exit polls was whether the voter had been contacted by the Obama and McCain campaigns personally about getting out to vote. Unfortunately, the exit poll consortium did not ask this question in all states, but it did in a dozen or so competitive states; these figures are summarized below:

The Obama campaign had a superior contact rate in 11 of the 12 battlegrounds; the only exception was West Virginia. Wisconsin was also relatively close, perhaps because Obama redirected its legion number of Illinois-based volunteers from Wisconsin to Indiana a couple of weeks in advance of the election.

The largest gaps, however, were in Indiana and out west in Colorado and Nevada, all places where Obama outperformed his polls on election day. (Unfortuntely, the exit surveys did not poll this question in New Mexico, where I’d expect you’d find similar numbers). Conversely, in West Virginia — the only state where McCain had a superior contact rate — Obama underpeformed his polls by several points on Tuesday.

We can, naturally, examine this relationship for all 12 battleground states. On the horizontal axis, we will plot the gap in contact rate, and on the vertical axis, the Obama-McCain gap in the popular vote versus that projected by the final 538 Trend-Adjusted Polling Average. 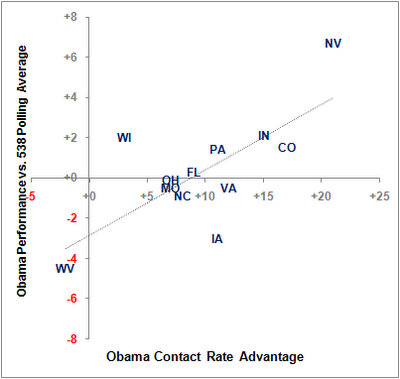 There is indeed a fairly strong relationship between contact rate and Obama’s overperformance or underperformance in the polls. (The R-squared of the linear regression line you see in the chart is .51, indicating that about half of the gap between Obama’s projected and actual performance was explained by disparities in the ground game.) Roughly speaking, each marginal 10-point advantage in contact rate translated into a marginal 3-point gain in the popular vote in that state. So the rule of thumb that a “good” ground game may be worth additional 2-3 points above and beyond what is reflected in the polls appears to hold; a great ground game may be worth somewhat more than that.

Interestingly, the regression line suggests that in states where there was no contact rate advantage — that is, states where the Obama and McCain campaigns contacted an equal number of voters — Obama would underperform his polls by about 3 points. This has several potential interpretations, but the one I find most compelling is that Democrats are in fact relying upon lower-propensity voters like youth and minorities. Therefore, it is more incumbent upon the Democrats to have a strong ground game to turn these voters out.

Nationally, there was an 8-point gap in contact rate … the Obama campaign reached 26 percent of voters with its GOTV efforts to McCain’s 18 percent. This can be contrasted with 2004, when Kerry’s campaign contacted 26 percent of voters to Bush’s 24. Although Obama’s field operation was good, Kerry’s was pretty good too; the difference may be that while Bush’s field operation was also good, John McCain’s was not. It is also possible that Obama’s field operation was more efficient than Kerry’s, as the contact rate gap was larger in battleground than in non-battleground states. I have heard multiple stories of voters in states like Indiana receiving as many as three or four in-person contacts from the Obama campaign on Tuesday. This is a sign of a campaign that knew where the tipping points were, rather than (say) sending volunteers to Michigan on Election Day just to play it safe.