One of the great successes of the legal wing of the conservative movement is the widespread connection in the mind of many citizens and pundits of “liberal” judicial philosophy with “activism,” and “conservatism” with “strict constructionism.” They’d have us believe that “liberal activist” and “conservative constructionist” are basically redundancies, and that there simply is no such thing as a conservative activist. This is patently untrue. 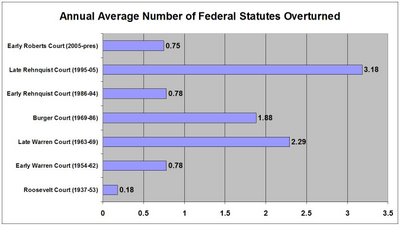 There is a very simple explanation for why a conservative may be activist and a liberal statist–the state of the law. The Warren Court wanted to overturn precedents, and so it ruled laws passed by Congress and (especially) state legislatures unconstitutional. And as the Court of that era slowly and sometimes not-so-slowly changed the law, the justices by definition needed to be less activist as the state of the law became more amenable to their views–precisely because they had changed the law.

But guess what? The Rehnquist Court did the same thing, as Republican-appointed justices found the laws passed by state legislatures and (especially) Congress during the years of the Great Society and thereafter to be out of line with the political and judicial philosophies they brought to the bench. Accordingly, they ruled to change the law too. Or–if we can pause a moment to act like adults and not be cowed by scary phrases devised by Federalist Society types to be used incessantly during hearings like the one presently underway to confirm Sonia Sotomayor–the Rehnquist Court trafficked heavily in “judge-made law.”

The two figures in this post are created from data compiled by Syracuse University political scientist Thomas Keck for his book, The Most Activist Supreme Court in History.

That most activist Court? A: The Late Rehnquist Court, which in terms of the annual average number of federal statutes overturned by the Court ranks first. Though I only show data from the Roosevelt Court forward, Late Rehnquist has the highest score of any Court era going back to the days of John Jay. So much for modern conservatives’ deference to legislatures and the disdain for “judge-made” law.

On the other hand, in the figure below we see that when it comes to rejecting state and local statutes, the late Warren Court was second most activist in American history. Here we see liberal activism, strongest in fact during the Great Society period and into the Burger period before fading as the (re)constituted Court slowly grows more favorable to the state of the law. But note that Early Rehnquist Court isn’t far behind. Here we see the ideological back-and-forth of the modern Court as it reacted to new members. In perhaps the most concise summary of his findings, Keck writes in his book (p. 230), “[M]odern conservatives have tried to curtail the liberal activism they inherited from the Warren Court, while simultaneously seeking to develop a new conservative activism of their own.” 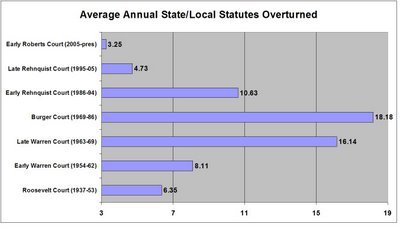 Part of the sad kabuki dance of Supreme Court confirmations is the ritual denial by nominees that they will depart in any way from constitutional prerogatives, and that they will “respect the law” and venerate judicial precedents. Well, geez, if all the Court justices are reading the same Constitution, and the same laws passed by Congress and state legislatures, and the same judicial precedents, and never applying any judicial philosophy of their own, then the Court would never issue anything but unanimous decisions.

The whole point of the Court is to rule laws unconstitutional based on justices applying their philosophical interpretations of the Constitution, and to reverse bad precedents when they recognize them. And the point of presidents nominating justices of similar ideological ilk is to put them on the Court to do just that. If the standard really were that all precedents must be upheld, the Court might as well pack up and do nothing more than administer the judicial system and settle occasional disputes between the elected branches. (Oh, and the Chief Justice could still oversee presidential impeachments … whooopee!) And, of course, by this same logic we’d still have Plessy v. Ferguson on the books, and no state-level protections for civil rights and liberties, and so on.

During confirmation hearings–whether for Sotomayor or John Roberts and Samuel Alito before her–the attempt to somehow disconnect what the justices actually do and what the nominees must promise they won’t do is a magnificent farce that insults all of us.