Meant to roll this out a bit earlier, but better late than never.

What I’ve done is to compile the projected medal winners in the 86 Winter Olympic disciplines from five six nine sources that forecasted individual winners; these are the Associated Press, USA Today, Sports Illustrated, McClatchy-Tribune, Examiner.com, Canwest, and (for some events only) ESPN.com and betting odds at Ladbrokes and bwin. Nothing terribly fancy here: I’ve taken a simple mean of the number of medals that each country was expected to win in each discipline, as averaged across the nine sources.

For the events in which medals have been awarded thus far, I’ve then compared the projected medal winners against the actual ones. You can see how each country is performing against its forecast in the ‘variance’ column down below. For example, the United States was originally projected to have won 2.7 medals in the events that have taken place to date, but we’ve actually won 6, meaning that we’re 3-4 medals ahead of pace. I’ve then added back in the consensus projections for the remaining events to produce a revised forecast. 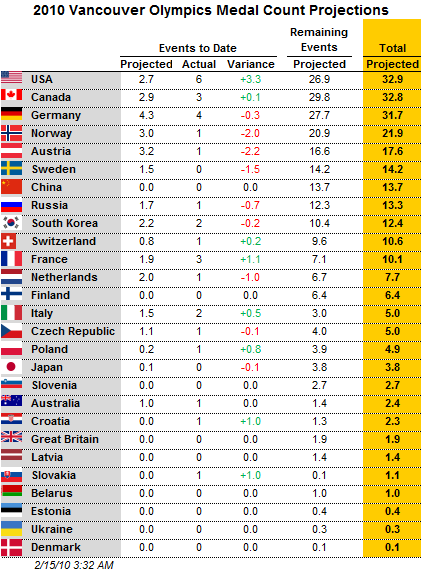 Thanks to the USA’s strong performance thus far, we’re now essentially in a three-way tie with Canada and Germany in the overall projections, with each country predicted to win between 31 and 33 medals. Norway and Austria, long-shots to begin with, are 2 medals off their pace thus far and would need a miracle to come back. Russia, once dominant in the Winter Olympics, has been harmed be the addition of events like short-track speed skating, freestyle skiing, and snowboarding in which they’re not very strong.

Canada has never stood atop the Winter Olympic medals table and the United States has just once, in the 1932 games in Lake Placid.

The USA is projected to win 2.0 medals in the events that will award medals tomorrow, Canada 1.4 and Germany 1.0.

I’m not going to promise that we’ll update this chart every single day, but we should do so periodically throughout the Games.

NOTE: Several additional forecasts have been added, resulting in the USA moving incrementally ahead of Canada in the projections.