You can find pretty much every species of poll in Florida right now.

Though the numbers were here and there, the outcome was the same everywhere.

Unless there is a major glitch, Mitt Romney will beat Newt Gingrich. 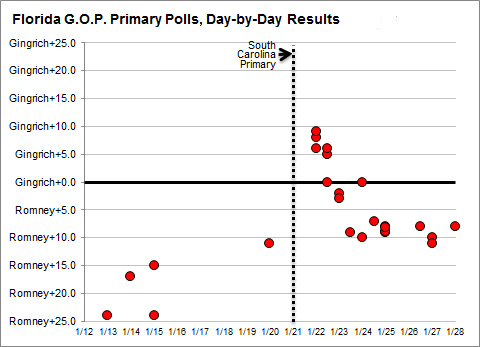 Sometimes, of course, the polls do get it wrong, even when they agree. Mr. Romney’s lead in the polls, now about 9 points in our forecast, is similar to the one that Hillary Rodham Clinton overcame against Barack Obama in the New Hampshire primary in 2008. So it’s not quite safe to think of the outcome as preordained.

Still, Mrs. Clinton had a debate on the Saturday before that primary in which she turned the momentum around. She also had a very good ground game in New Hampshire, which brought out her loyal supporters. And New Hampshire voters are famous for deciding at the last minute.

In Florida, by contrast, Mr. Gingrich has already missed his opportunity to better Mr. Romney in Thursday night’s debate. There isn’t much of a role for the ground game in a state as large as Florida (and if there were, it would not necessarily work to the benefit of Mr. Gingrich’s resource-strained campaign).

And about one-third of Floridians have already voted. Since Mr. Gingrich only led Mr. Romney for a few fleeting days in the polls, that means that Mr. Romney should have banked an advantage, and that Mr. Gingrich would need to win by perhaps 5 or 10 points on Election Day to claim the state.

That could also lessen the impact of late-breaking developments in the news cycle — like Mr. Gingrich receiving the endorsement of Herman Cain.

To the extent that there is good news for Mr. Gingrich in the latest polls, it is that his deficit to Mr. Romney seems fairly static. It has consistently been between 7 and 11 points in polls released in the past few days, rather than increasing after the Thursday debate.

Still, that may speak to a lost opportunity. Perhaps Mr. Gingrich — who still leads Mr. Romney in national polls — would have had the makings of a comeback with a strong performance in the debate, coupled with the headlines generated by Mr. Cain’s endorsement and an uptick in advertising spending on his behalf.

As it stands now, however, the chance of Mr. Gingrich pulling off an upset in Florida is only about 12 percent, according to the FiveThirtyEight forecast model.

Instead, if there is a candidate with upside potential in Florida, it might be Rick Santorum. The most recent polls have shown better results for him, and he now is projected to 15 percent of the vote, up from 11 percent earlier this week.

Mr. Santorum, however, left the campaign trail in Florida to hold fund-raisers in Pennsylvania and Virginia, which could make it harder for him to maximize his momentum.