The coming Congressional debate over fiscal policy is sure to feature a wide array of proposals, some of which would hit certain taxpayers harder than others.

But one idea being floated by Congressional negotiators, as described in an article by The New York Times’s Jonathan Weisman on Thursday, is hard to defend from the standpoint of rational public policy making.

The math behind these calculations is not all that complicated. It’s just a matter of understanding how marginal tax rates work.

Take an American who earns $400,000 a year in taxable income. (This is roughly the threshold at which a taxpayer reaches the top 1 percent of households.)

The top marginal federal income tax rate is now 35 percent, and kicks in at earnings above $388,350.

This is because the tax rates are applied on a marginal basis. For every dollar that a taxpayer earns up to $8,700, she owes the federal government 10 cents in taxes — regardless of how much money she makes thereafter.

Under the proposal described in Mr. Weisman’s article, that would change.

“One possible change would tax the entire salary earned by those making more than a certain level — $400,000 or so — at the top rate of 35 percent rather than allowing them to pay lower rates before they reach the target, as is the standard formula,” he reports.

The question is when the government would collect the additional $23,000 of taxes.

Of course, the government might never see the money, since the taxpayer might do everything in her power to avoid crossing the $400,000 threshold.

Here’s the problem: the government would now want to collect 35 percent of the taxpayer’s overall income, when it had been billing her at a lower rate on almost all the income she had earned so far.

If the government simply started collecting 35 percent of every dollar she earned above a certain threshold, it would have no way to make up for the lower rates it had been charging her previously.

Instead, it needs to make up the deficit somewhere to collect that additional $23,000 of taxes. It can only accomplish that by making the tax rate greater than 35 percent on at least some of the income that she has received.

For example, the taxpayer might be asked to pay additional taxes on the $150,000 of earnings between $250,000 and $400,000. To collect the extra $23,000, the government would need to tax this income at a rate of about 15 percent — in addition to the marginal tax rates that are already applied under current law, which now range between 33 and 35 percent.

Thus, the taxpayer would owe close to 50 percent in federal income taxes on earnings between $250,000 and $400,000. (If state taxes and Medicare taxes are also considered, her marginal tax rate could be close to 60 percent in some states.)

Perhaps you think that someone earning $300,000 or $400,000 should be taxed much more than they are now. There is still a perversity introduced by this proposal.

Specifically, after the taxpayer had hit her 400,000th dollar of income, her marginal tax rate would then decline. Rather than owing 50 cents for each dollar earned, she’d be back to a 35 percent rate instead.

This is what’s known as a “tax bubble”: when someone earning less income might be taxed at a higher marginal rate than someone making more. 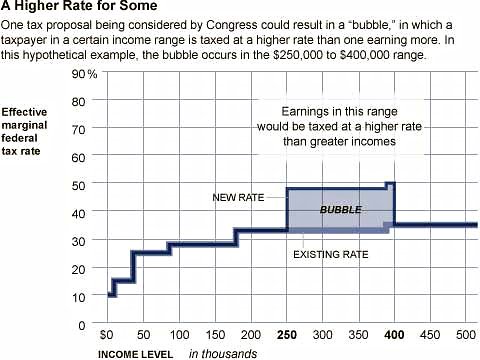 Tax bubbles have existed at various times in the federal tax code, such as from 1986 through 1990. They also exist in some state tax codes. But the proposal described in Mr. Weisman’s article would create an especially steep one.

To be clear, the people subjected to the tax bubble would be reasonably well off. An average family making $50,000 a year would not pay any additional taxes because of it, nor would its incentives be distorted in any substantial way.

Also to be clear: many of the people writing about tax policy, from academic economists to yours truly, make incomes that are considerably above the national average.

Nonetheless, the proposal described in Mr. Weisman’s article would place its heaviest tax burden on the so
mewhat wealthy as opposed to the very wealthy, particularly as it is being proposed as an alternative to raising the top marginal rate.

If the tax bubble were implemented, but the tax code were otherwise unchanged, then someone making $400,000 would owe $140,000 in federal income taxes, $23,000 more than she does now, increasing her overall tax rate to 35 percent from about 29 percent.

Someone making $4 million would owe $1.4 million in taxes, also reflecting a $23,000 increase. But the increase would be minimal on a percentage basis, since it comes from a larger pool of income. Their overall tax rate would rise to 35.0 percent from 34.4 percent. 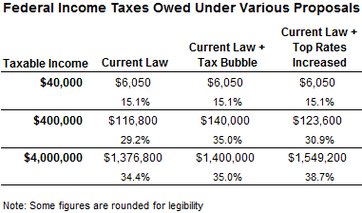 If, instead, the top two marginal tax rates were increased to 36 percent and 39.6 percent, as they were under the Clinton administration, then someone making $400,000 would owe about $124,000 in federal income taxes – or about 31 percent of her income. This would reflect a tax increase, but less than under the tax bubble proposal.

However, the government would collect more taxes from the $4 million earner. Someone making that much would owe $1.55 million if the Clinton-era rates were restored, with their tax rate rising to 38.7 percent from 34.4 percent.

Either policy would reflect a tax increase – whatever semantics the Congress might use to describe it. It’s a question of which taxpayers would bear more of the burden.

It’s also a question of whether the tax increase would make the tax code more efficient or less so. One might favor a flatter schedule of marginal tax rates or a steeper one. All taxes have the potential to discourage work. But smoother increases in marginal tax rates, as
under current law, create less economic friction, and fewer deadweight losses, then those with a number of peaks and valleys. It is hard to see the economic rationale for creating a bubble in the middle of the tax code.

A version of this article appears in print on 11/27/2012, on page A20 of the NewYork edition with the headline: Congressional Proposal Could Create ‘Tax Bubble’.